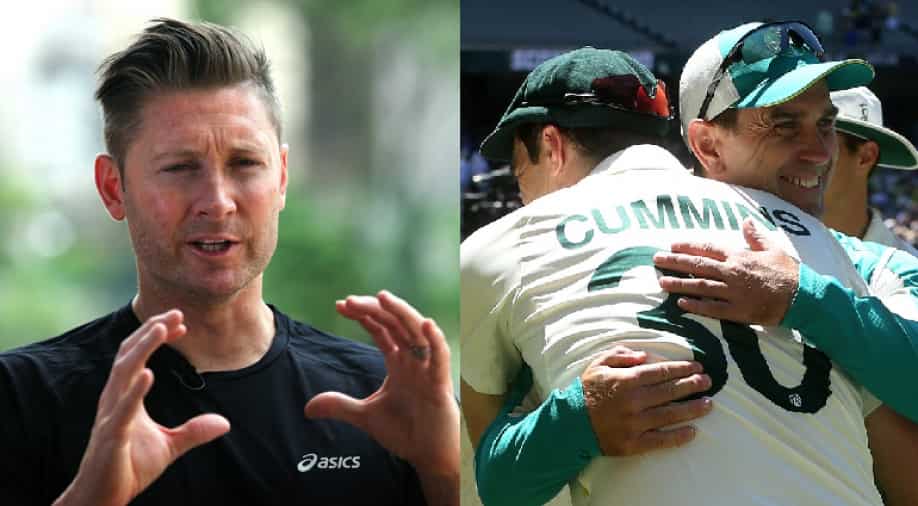 Former Australia captain Michael Clarke has urged current Aussie skipper Pat Cummins to come out and speak for himself amidst a controversial saga over Justin Langer's shock resignation as the head coach of the side.

Former Australia skipper Michael Clarke has urged current Aussie captain Pat Cummins to clarify his stand on the ongoing saga involving Justin Langer's shock resignation as head coach. Cummins has been facing intense criticism from some former Australian cricketers, who have slammed him for not taking a stand for Langer and playing a role in his resignation as head coach.

Langer submitted his resignation from the head coach post last week, days after having helped Australia win the Ashes emphatically by 4-0 at home against arch-rivals England. He had last year inspired the team to a memorable maiden T20 World Cup triumph in the UAE and was expected to get an extension as the head coach of the side.

However, Langer was offered a short-term contract extension by Cricket Australia. The former Australia batter decided to turn down the offer and resigned from the post of head coach amid reports that the payers were not happy with his strict coaching style and wanted him to be pushed out.

As Cummins faces criticism for not taking a stand for Langer, Clarke said the Australian skipper needs to come out clear as his clean reputation has already taken a hit.

"The Australian public isn't stupid and this is my point with Pat Cummins. His reputation is squeaky-clean. Right now it has taken a hit, until he stands there and voices his opinion. Look what Mitchell Johnson said about Pat Cummins. A teammate, a friend of his has smoked him," Clarke said while speaking on The Big Sports Breakfast on Monday.

"My advice to Patty is he has got to stand there. He needs to tell the fans where he sits on this because everyone thinks it is Patty who made the decision. That accountability sits with him. He is trying to honour both parties and has done it very well. He is trying to look after Cricket Australia. I don't like seeing Pat get smacked for this because I think he is in a lose-lose situation. He sits right in the middle," he added.

A number of former Australian cricketers including the likes of Mitchell Johnson and Steve Waugh among others have slammed Cummins for not standing up for Langer. Clarke urged Cummins to stand tall and explain to the former Aussie stars the exact situation which led to Langer's decision of quitting as the head coach of the team.

"I saw Mitchell Johnson's comments, he smoked him. I think a lot of people are thinking what Mitch is thinking. You've got the likes of Mark Taylor talking about it, Steve Waugh making comments, Ricky Ponting's comments are very strong. I'm suggesting to Pat Cummins as the leader, he needs to stand tall and explain to past players -- Mitchell Johnson, Steve Waugh, Ricky Ponting, Matthew Hayden -- plus the fans and cricket lovers, what the hell is going on here," said Clarke, who led Australia to a World Cup triumph in 2015.