Angel Di Maria to Juventus will be like Diego Maradona in Serie A: Gianluigi Buffon makes huge claim 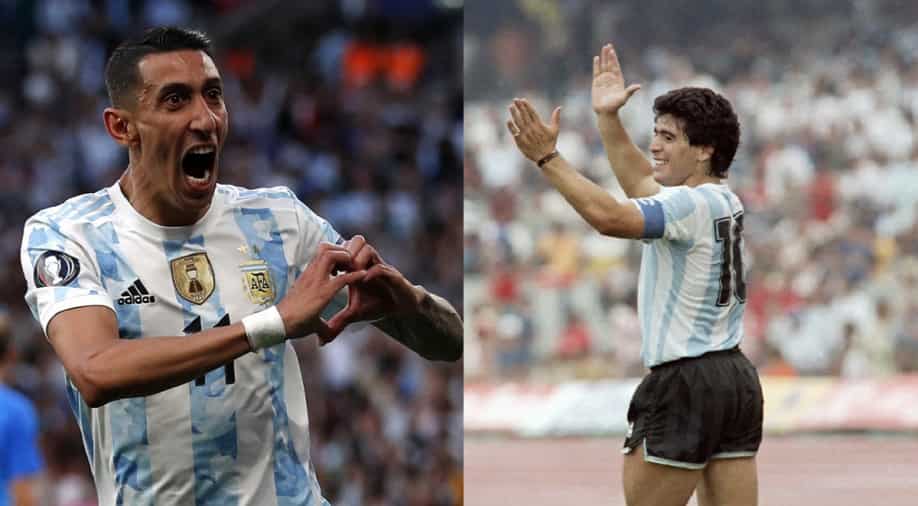 Juventus legend Gianluigi Buffon has claimed if Angel Di Maria joins Juventus this summer it will be like Diego Maradona moving to the Serie A back in time.

Juventus legend Gianluigi Buffon has made a huge claim stating that Angel Di Maria's move to the Italian club this summer will be equivalent to Diego Maradona joining the Serie A during his playing days. Di Maria is currently a free agent after his contract at Paris Saint-Germain (PSG) expired this year and is searching for a new club with Juventus one of the favourites to sign him.

The Argentinian winger was Buffon's teammate at PSG when the legendary Italian goalkeeper played for the French side after leaving Juventus. Di Maria is one of the most decorated footballers of the present era having won several titles at his former clubs Real Madrid and PSG.

Heaping praise on his former PSG teammate, Buffon called Di Maria a technically gifted footballer, who can score goals, produce assists and dribble past defenders at ease. He went on to compare his potential arrival at Juventus to his late Argentinean compatriot playing for Serie A side Napoli in his career.

“Right now, Di Maria in Serie A, is like Maradona. Am I clear?," - Buffon told Gazzetta dello Sport. “Footballers must be valued considering the context where they play. Today Serie A is technically poorer and Angel has so much technique.

He is decisive in front of goal, he dribbles past his opponents so easily. He is good at delivering assists and runs up and down on the pitch. He can play in different roles. In a few words: he is a football player," he added.

At 34, Di Maria might already be past his best but has a plethora of experience playing for top teams across various leagues in the world which can help Juventus in challenging for the Serie A title once again next season. Buffon believes age is just a number for players like Di Maria as he compared the Argentinian winger to the likes of his former PSG teammates Neymar and Kylian Mbappe.

“I am 44, but I still play. Age doesn’t matter. Motivation and passion are much more important and the same goes for determination. If Di Maria joins Juventus, it means that he’s ready to do so," said Buffon.

“We are talking of an exemplary professional, a nice guy, one who never gives up and fights during games and training sessions. I repeat, for today’s Serie A, he’d be like Maradona. At PSG, I played with Neymar, a young Kylian Mbappe, Marco Verratti, but Di Maria was not inferior to any of them.

“When he won the Decima at Madrid in 2014, he was playing with Karim Benzema, Cristiano Ronaldo, Luka Modric and Toni Kroos. He was always a step back but knew how to play as a winger, attacking midfielder and even mezzala. Whoever signs him, and I hope it’s Juve, makes a deal. We are talking about a champion and football needs champions," he added.