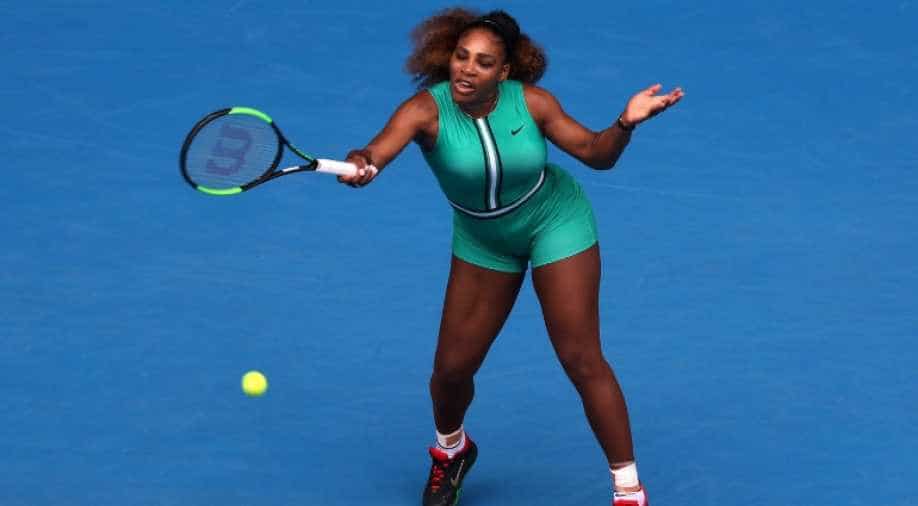 Serena Williams of the US in action during the match against Germany’s Tatjana Maria. Photograph:( Reuters )

Williams, who won the 2017 Open while she was pregnant with her first child, appeared in a sporty turquoise Nike romper with white and black stripes.

Serena Williams' on-court outfits are almost more of a talking point than her matches these days. On Tuesday also, American star Williams had sent the tennis world into a frenzy with her latest outfit at the Australian Open.

Williams, who won the 2017 Open while she was pregnant with her first child, appeared in a sporty turquoise Nike romper with white and black stripes.

According to a statement from Nike, which also sponsors Australian Nick Kyrgios, the Australian Open collection "takes inspiration from early Nike Tennis DNA... This look was made iconic by Andre Agassi in the '90s".

In his playing days, Agassi, who coaches Bulgarian 20th-seed Grigor Dimitrov, made bold on-court choices including denim shorts and neon colours, with the exception of Wimbledon, which has a strict white dress code.

Tennis world and the fans inside Rod Laver Arena certainly liked her new look and roared with delight at the reveal.

Serena Williams back in Melbourne and her new outfit gets a roar of approval inside RLA.#AusOpen @OmnisportNews pic.twitter.com/UoMpMYod6D

Serena gave that hair some volume😀😀 but waiting to see what looks like a new green outfit. 👗👗🤔🤔 #AusOpen

Williams made a return to the Australian Open court with a win as the American tennis star defeated Tatjana Maria in straight sets 6-0, 6-2 to move into the second round.