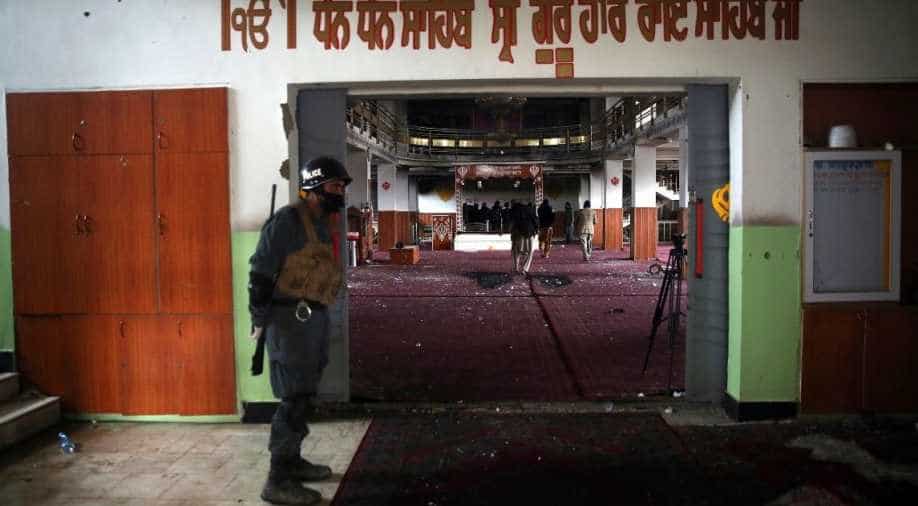 A policeman stands guard at the entrance to a Sikh house of worship as journalists film the aftermath of an attack in Kabul, Afghanistan (File) Photograph:( PTI )

The people belonging to these communities in Afghanistan are at its lowest levels as a population of 250,000 is now reduced to fewer than 700

Once-flourishing and thriving in Afghanistan, Sikhs and Hindus, who are facing persecution by the Islamic State terrorists, are leaving the nation in pursuit of a safer and better livelihood.

The people belonging to these communities in Afghanistan are at its lowest levels as a population of 250,000 is now reduced to fewer than 700, reported news agency AP.

"We are no longer able to stay here," said Hamdard, a member of this community who just wanted to be known by his last name fearing consequences if he revealed his complete identity.

He said his seven family members, including a sister, son-in-law, nephews in an attack by IS on a temple in March, which killed 25 Sikhs.

Several people like Hamdard, who are born in Afghanistan, now wants to flee the country, claiming that they face discrimination in the Muslim majority country and state failed to protect them thoroughly.

Hamdard belongs to a group of Sikhs and Hindus, who last month left for India, from where they will be sent to a third nation.

He said the discrimination they face is nothing new and over the last many years, they have been targetted by various groups.

In the late 1990s, Sikhs and Hindus were asked by the Taliban, who ruled that time, to wear yellow armbands, but following much outcry globally, it was not implemented.

Also, people from these groups are unable to get backs their homes which were illegally captured years ago.

Hindu temples were also demolished during brutal clashes from 1992-96.

"Suffering big fatalities for a small community is not tolerable," said Charan Singh Khalsa, a leader of the Sikh community, who lives abroad and refused to name the country where he currently stays over a threat to his safety.

Charan, who fled the country two years ago after his brother was kidnapped and killed, said the last three years have been the worst for Afghans, specifically for Sikhs and Hindus.