We need patriotism like India and a leader who is trusted by all: Sri Lankan Buddhist monk Galagoda Aththe Gnanasara Thero to WION 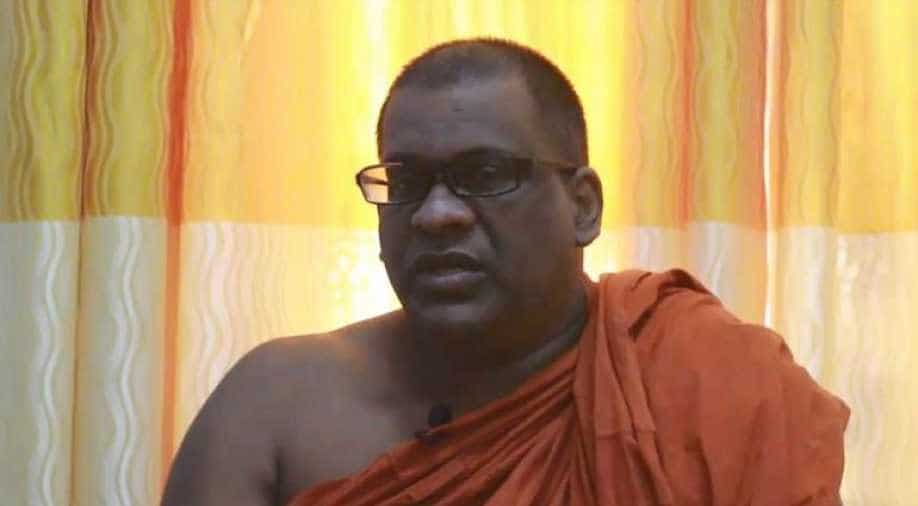 Gnanasara Thero told WION's Ramesh Ramachandran that the Bodu Bala Sena has not decided who to support in the forthcoming presidential election in Sri Lanka.

"India’s action is important to us and if we become prey of Islamic terrorism it will be a threat for India as well. So, the understanding of the leaders is important," he tells in an exclusive interview to WION's Ramesh Ramachandran.

Gnanasara Thero is the general secretary of Bodu Bala Sena, a group comprising the Sinhala Buddhist clergy. He was released from the prison in May this year after president Maithripala Sirisena pardoned him.

The monk says that the Bodu Bala Sena has not decided who to support in the forthcoming presidential election in Sri Lanka.

WION: What did the July 7 meeting of the Buddhist clergy in Kandy decide?

Gnanasara Thero: On July 7, we held a convention in Kandy for a purpose. As a race, Sinhalas are divided due to party politics. Owing to this division, the (Sinhala) race has become weak and it has allowed extremist forces to operate in this country. Now is the time to resolve these issues and eradicate the fear of death. So, the convention was held to educate the Buddhist clergy. It was successful. There is no possibility of defeating extremism through politics. So, we proposed to establish a programme where the Sinhalese get stronger. We came out with 10 proposals on July 7 and plan to take it islandwide.

WION: Who will the Bodu Bala Sena support in the forthcoming presidential elections and the reasons therefor?

Gnanasara Thero: At this moment, the discussions are on about holding provincial council, general and presidential elections. No final decision has been reached. The political situation is complicated. None of the main political parties is able to announce their candidate. We don’t know if it will be a common candidate. We don’t have any faith in them and we believe that they all have failed. If you take the 225 members in the parliament, all are accused of some things. So, citizens are lobbying differently where some expect new names and some new faces which is new to politics. Such people are coming up and they have started publishing their policies. We have no anxiety even though it is at a complicated juncture. Why should we get excited if the main political parties are unable to find their candidates yet? For us, it is important to have a person who could change old laws, increase security, is capable of taking bold decisions to eradicate Islamic extremism, and is capable of establishing unity according to Buddha’s teaching. It should be a society based on trust for all citizens. It should be a free country for all. So, we want a Sinhalese to win with a Sinhala majority vote. Protection for all ethnicities can be assured only with such a move, to which we are committed.

WION: You are reported to have said on July 7 that a Sinhala government should be formed, that the Sinhalese need to unite politically, economically and culturally, and that there is a need to protect Sri Lanka from Islam. Please elaborate on it.

Gnanasara Thero: Sinhalese were never racists. When the Tamils in the north, east and the central hills were attacked culturally, the rulers were unable to find a solution. These Tamils in thousands were converted into Christianity and destroyed the Hindu culture. On the other hand, Hindus are getting Islamised. Not only that, the traditional Muslims are now moving towards Arabic Islamisation. Wahhabi groups with abundant funds operating within the government influence national decisions. We see the unity in India where they all say “Bharat Mata ki Jai". We see how they love their country. We also need that patriotism in Sri Lanka. We need a leader trusted by Muslims, Tamils and the Sinhalese. If you take Colombo, the number of Sinhalese are exceeded by Tamils and Muslims. They are not attacked and they have their living style without any issues. But minority voters are influencing the main political body. We need not have a situation where the tail wags the dog. It should be the dog who wags the tail. We need a government to take straight decisions. That is why it is necessary to have a Sinhalese government.

WION: Are you in favour of the Buddhist clergy or the Bodu Bala Sena forming a political party and fielding its candidates in future elections?

Gnanasara Thero: We are already engaged in a type of a political movement and we think that our involvement in a general election will be decisive. We are in the process of building a system at this movement.

WION: The Muslims in Sri Lanka fear for their lives after the April 2019 attacks in the country. What is the Bodu Bala Sena or the Buddhist clergy doing to reassure the Muslim community?

Gnanasara Thero: The traditional Muslims have lived with us in this country for centuries in harmony. In any society, there would be incidents. But since 1981, the traditional Muslims have started to change very fast. This change came to the point that they were willing to commit suicide for their God and make sacrifices. It is a very sad situation that brings tears to the eyes. So, we have a responsibility as the Buddhist clergy to solve this Islam issue rather than allowing the politicians to solve it. I trust the 75 per cent of this issue can be solved by Buddhist monks. We can use the Tripitaka to analyse the Quran and its verses which were found in dark ages and the validity of them in the modern world with an open discussion. We should be able to destroy the Wahhabism if this question is debated openly. We know that traditional Muslims will support us to eliminate the dark thoughts within them and defeat Wahhabism.

WION: Some people in Sri Lanka and around the world accuse you of hate speech, extremism and spoiling the image of Buddhism as a peaceful religion. Do you agree with them? What would you say in your defence?

Gnanasara Thero: There is nobody in this world who will not be insulted. Buddha, Jesus, Prophet Muhammad were also insulted. Our favourite leaders are also accused and there is nobody who doesn’t get accused of something. So, we also get accused of something. The insults we get are much similar to a naked man insulting a person in underpants. We as Buddhist monks can't allow the carnage to take place in the name of God, where they expect the entire world to be their followers. If you take the Quran, the hate speech and statements falling into such category are full of them. So, we are sad to see such accusations coming from people who barely know the basis of Islam.

WION: Some media reports liken you to Buddhist monk Ashin Wirathu of Myanmar, who is variously described as an ultra-nationalist and the leader of an anti-muslim movement in Myanmar. Some other reports link the Bodu Bala Sena to the "969" movement of Myanmar. Your thoughts?

Gnanasara Thero: We have met the Buddhist monk in Myanmar and have discussed the Wahhabism spreading there. Myanmar is a Theravada Buddhist country but there is a difference. But there is no barrier for us to talk with another monk in that country. So, all Buddhists are facing the same situation. This is the same situation in southern Thailand as well. We don’t want any prize from the world. There are many media establishments using money from west Asia.  We don’t have money and media to face them. So, we get hit by enemy attacks. So, we have joined hands with him to defeat Islamic extremism in the region. But here, our Bodu Bala Sena operation is different from the 969 organisation.

WION: You have said that politicians should leave the fight against Islamist extremism to religious leaders such as yourself. What do you propose to do, how and when?

Gnanasara Thero: We have experienced what happened in the recent past. So, it is essential to win the public trust for our new programme. Islamic extremism has created incidents as far back as the 1990s. But our leaders were unable to establish a programme against it. The black July in 1983 led to a 30-year war. Even though we defeated the LTTE, the separatist forces are still operating in other parts of the world to divide the country.  If Prabhakaran was stopped at the initial stages, the Tamil society will not have gone back by several decades. As a result, both the Tamil and the Sinhalese failed and there was no victory for either party.  Buddhist monks can defeat this by wisdom and not by weapons of different sizes. We did a similar fight against the bible in the 1800s. So, we have the experience. Today, the Quran, which is the other side of the Bible, has come to object us. We can defeat this using wisdom and that is why we wanted the politicians to step out. If the politicians are given the chance to solve, they will not be able to do it for the next 100 years. It is the nature of politicians to create situations or make use of the situations for their benefit. This Wahabism should get defeated within the mosque. Now it has come to the stage where the father and son fight within the house, the mosques are fighting each other and the villages are fighting against each other. We need the mosques to sort it out with the inputs from professionals and intellectuals. Once sorted, the politicians should bring in the laws.

WION: How do you view the policies of the BJP-led NDA government of prime minister Narendra Modi in India?

Gnanasara Thero: I think India’s Narendra Modi has a reputation similar to Putin in Russia, Donald Trump in the US, and Xi Jinping in China. Some of his radical decisions include the change of financial regulations and change of currency where many had to burn the 1,000 rupee notes.  So, radical decisions of Narendra Modi are welcomed in India. He is against Islamic extremism and he also talks about building a Buddhist international platform. I think about the unity between the Hindus and the Buddhists to eradicate this global threat of terrorism. India is our ancestral house and the big brother. India’s action is important to us and if we become prey of Islamic terrorism it will be a threat for India as well. So, the understanding of the leaders is important and the protection of Narendra Modi. We need his protection. Gautama Siddhartha is an Indian and we have protected his preaching for 2,500 years. Now we need support from Narendra Modi.