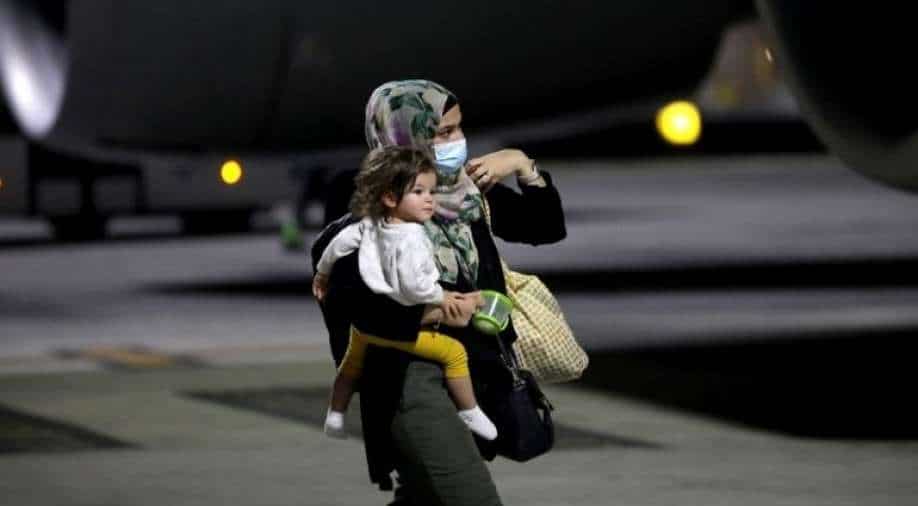 Afghan dual nationals disembark from a Qatar Airways plane as they arrive from Kabul on September 10, 2021. Around 150 dual nationals from Canada, Britain, Germany and France were evacuated from Afghanistan to Qatar. Photograph:( AFP )

The military transferred most of the still-flagged evacuees - some with relatives - to Camp Bondsteel, a NATO base in Kosovo, which agreed to let Afghans be housed there for up to a year if they stayed on the base.

Two months after the evacuation of 80,000 Afghans fleeing the Taliban takeover, most have cleared subsequent vetting for admission into the United States. Some initially raised possible security issues - such as evacuees who shared a name with terrorism suspects — but were absolved on closer scrutiny.

But several dozen have been red-flagged, despite having helped the United States during its 20-year war in Afghanistan, because screenings uncovered apparent records of violent crime or links to Islamist militants that follow-up evaluations have not cleared, officials said. The derogatory information has raised the question of what to do with them, leaving them in limbo.

The military transferred most of the still-flagged evacuees - some with relatives - to Camp Bondsteel, a NATO base in Kosovo, which agreed to let Afghans be housed there for up to a year if they stayed on the base. They are designated as requiring further investigation, and no final decision has been made about whether they will receive permission to enter the United States, officials said.

But in an acknowledgement that many are likely to be barred from the United States, the Biden administration’s national security team has been meeting to grapple with how to handle them.

Several officials said that of the group of evacuees drawing longer-term scrutiny, those who appear to have committed violent crimes number in the single digits, and several dozen have been flagged for apparent links to Islamist militants — mostly the Taliban.

The internal deliberations about the evacuees deemed problematic have centred on two novel questions, the officials said.

One is short term: whether American troops can detain Afghans if they grow fed up with waiting and decide to walk out the gates of Camp Bondsteel, contrary to the agreement the United States struck with Kosovo. It is not clear what legal authority the military has to hold non-Americans who are not wartime detainees — the evacuees are not — indefinitely abroad.

That scenario may never happen: To date, none has tried to walk off the base, they said. But interviews with several current and former officials suggested that there might not be clear consensus about what guards could or should do in such a situation.

The other question is longer-term: what to do with evacuees ultimately deemed ineligible to come to the United States if diplomatic efforts fail to persuade other countries to take them in.