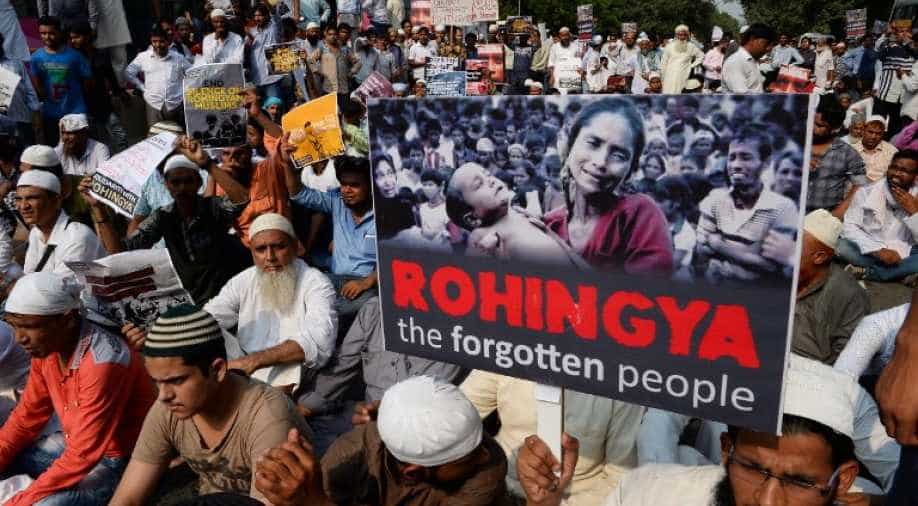 The UN has accused Myanmar of waging an ethnic cleansing campaign against the Rohingya, a stateless group that the Buddhist-majority country refuses to recognise as citizens.? Photograph:( AFP )

The ultra-nationalists in Yangon braved a downpour as they waved Myanmar flags and banners describing the UN and global NGOs as "supporting organisations for the terrorists".?

Pressure grew on Myanmar Monday as a rights group urged world leaders to impose sanctions on its military, which is accused of driving out more than 410,000 Rohingya Muslims in an orchestrated "ethnic cleansing" campaign.

The call from Human Rights Watch came as the UN General Assembly prepared to convene in New York, with the crisis in Myanmar one of the most pressing topics.

It also came on the eve of a highly-anticipated national address by Myanmar's civilian leader Aung San Suu Kyi -- her first on the Rakhine crisis.

The exodus of Rohingya refugees from mainly Buddhist Myanmar to neighbouring Bangladesh has sparked a humanitarian emergency. Aid groups are struggling to provide relief to a daily stream of new arrivals, more than half of whom are children.

Myanmar has suggested it will not take back all who had fled across the border, accusing those refugees of having links to the Rohingya militants whose raids on police posts in August triggered the army backlash.

Any clear moves to block the refugees' return will likely anger Bangladesh Prime Minister Sheik Hasina, who will press the General Assembly to raise global pressure Myanmar to take back all the Rohingya massing in shanty towns and camps near the border.

Human Rights Watch also called for the "safe and voluntary return" of the displaced as it urge governments around the globe to punish Myanmar's army with sanctions for the "ongoing atrocities" against the Rohingya.

"The United Nations Security Council and concerned countries should impose targeted sanctions and an arms embargo on the Burmese military to end its ethnic cleansing campaign against Rohingya Muslims," the group said in a statement.

Myanmar's military was hit with Western sanctions during its 50-year rule of the country. But most have been lifted in recent years as the generals have allowed a partial transition to democracy.

Nobel peace laureate Suu Kyi has shocked the international community with her near-silence on the plight of the Rohingya and her failure to condemn the actions of the army, with whom she has a delicate power-sharing arrangement.

But analysts say it will be difficult for her to tamp both global outrage and combustible religious tensions at home, where there is broad support among the mainly Buddhist populace for the army's crackdown.

The sharp divide was on display Monday as protests broke out in Dhaka -- where 20,000 Islamist hardliners marched in solidarity with the Rohingya -- and in Yangon, where a much smaller group of 300 gathered to blast global interference in the conflict.

The ultra-nationalists in Yangon braved a downpour as they waved Myanmar flags and banners describing the UN and global NGOs as "supporting organisations for the terrorists".

While the world has watched the refugee crisis unfold with horror, there is little sympathy for the Rohingya inside Myanmar.

Many Buddhists revile the Muslim minority and have long denied the existence of the Rohingya as an ethnic group, insisting they are illegal immigrants from Bangladesh.

Suu Kyi's government has so far defended the military campaign as a legitimate crackdown on the Rohingya militants, who first emerged as a fighting force last October.

On Sunday Myanmar's Information Committee accused those who fled to Bangladesh -- more than a third of the Rohingya population -- of working in cahoots with the Rohingya militants, a rag-tag group of fighters armed with mostly rudimentary weapons.

"Those who fled the villages made their way to the other country for fear of being arrested as they got involved in the violent attacks," the statement said.

"Legal protection will be given to the villages whose residents did not flee," it added.

The violence has gutted large swaths of northern Rakhine in just over three weeks, with fires visible almost daily across the border from the Bangladesh camps.

Some 30,000 ethnic Rakhine Buddhists and Hindus have also been displaced by unrest in northern Rakhine, where foreign aid has been severely curtailed.

On Monday, Doctors Without Borders repeated calls for "unfettered access" to the conflict zone, saying hundreds of thousands of people are thought to be languishing "without any meaningful form of humanitarian assistance".