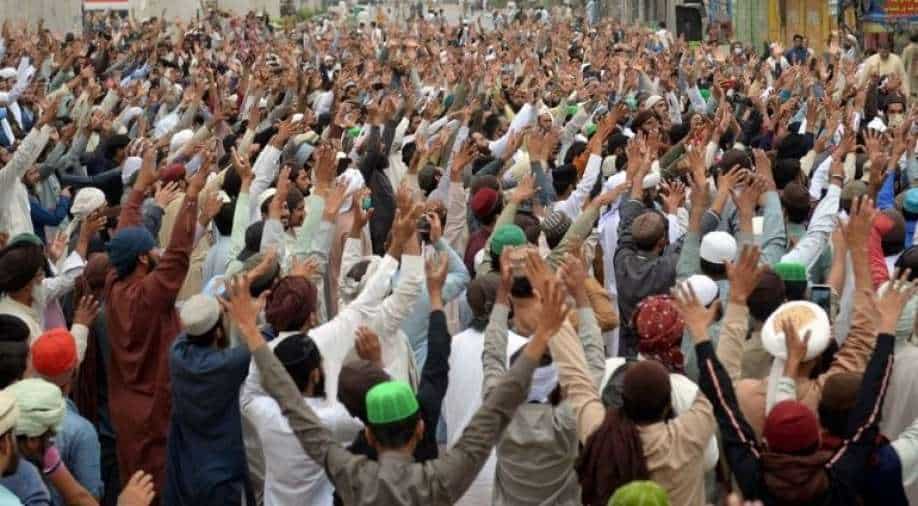 Supporters of the Tehreek-e-Labaik Pakistan (TLP) Islamist political party chant slogans as they protest against the arrest of their leader in Lahore, Pakistan (file photo).  Photograph:( Reuters )

Tehreek-i-labbaik, the hardline Islamist group was banned in Pakistan earlier this year as they staged violent protests to demand ouster of French ambassador to Pakistan

Tehreek-i-Labbaik (TLP), the hardline religious group in Pakistan on Monday said that it was ending its sit-in in Wazirabad, reported Pakistani news outlet Dawn. The sit-in went on for more than a week in Wazirabad in Pakistan's Gujranwala District. Pakistan government lifted ban on the extremist group on Monday.

The TLP was declared as a proscribed organisation in April this year after violent protests by the group to force the government to expel the French ambassador over the issue of blasphemous cartoons published in France.

The government, which recently struck a secret agreement with the TLP, on Sunday issued a formal notification to remove the hardline Islamist party from the list of proscribed organisations after the TLP committed to behave and follow the law in future.

"In exercise of the powers conferred under sub-section (I) of Section 11U of the Anti-Terrorism Act, 1997 (as amended), the federal government is pleased to remove the name of the Tehreek-i-Labbaik Pakistan from the First Schedule of the said Act as proscribed organisation for the purpose of the said Act," reads the notification as quoted by Press Trust of India.

The TLP launched protests on October 18 from Lahore and announced to march to Islamabad to force the government to expel the French ambassador and release the chief of the outfit Saad Rizvi.

At least 21 people, including 10 policemen, lost their lives during fierce confrontation between the TLP workers and law enforcement authorities in recent days.

After the bloody clashes, the group had reached Wazirabad town on the Grand Trunk Road when a ?secret agreement? was reached with the government on October 31.

The notification stated that the TLP had been placed in the First Schedule as a proscribed organisation by the federal government on April 15 this year on the recommendation of Home Department of Punjab.

Prime Minister Imran Khan had on Saturday approved the revocation of the ban on TLP.