Taliban take Kandahar and Herat; US and UK to evacuate Afghanistan embassies 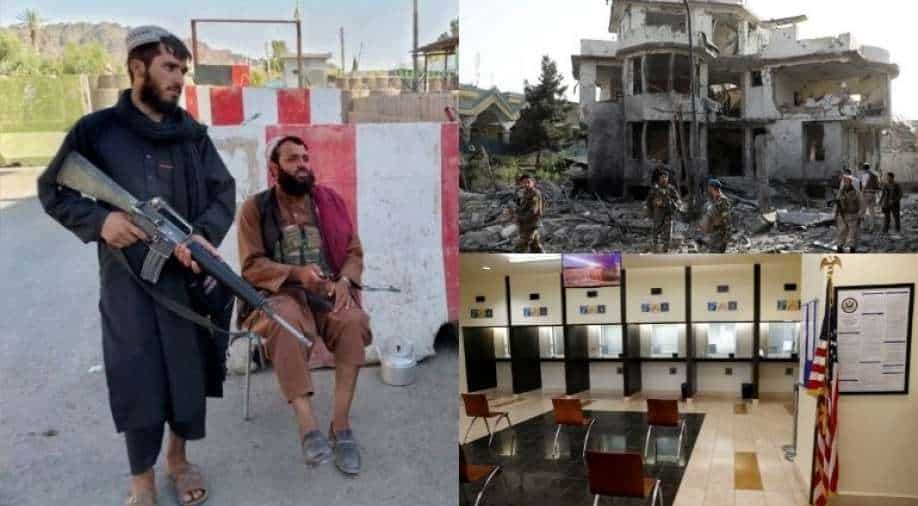 Taliban, Afghan armed forces and the consular section at the US Embassy in Kabul Photograph:( Reuters )

The speed and violence of the Taliban offensive have sparked recriminations among many Afghans over President Joe Biden's decision to withdraw US troops, 20 years after they ousted in the Taliban in the wake of the September 11 US attacks

The Taliban claimed control over two of Afghanistan's biggest cities on Thursday, according to media reports, as the United States and Britain said they would send thousands of troops to help evacuate their embassy staff.

The capture of Kandahar and Herat, the country's second and third largest cities, would represent the Taliban's two biggest military victories since they began a broad offensive in May.

The fall of major cities was a sign that Afghans welcome the Taliban, a spokesperson for the group said, according to Al Jazeera TV.

The US State Department said Secretary of State Antony Blinken and Defense Secretary Lloyd Austin spoke to Afghan President Ashraf Ghani on Thursday and told him the United States "remains invested in the security and stability of Afghanistan". They also said the United States was committed to supporting a political solution to the conflict.

In response to the Taliban's swift and violent advances, the Pentagon said it would send about 3,000 extra troops within 48 hours to help evacuate embassy staff.

"We expect to draw down to a core diplomatic presence in Afghanistan in the coming weeks," said State Department spokesperson Ned Price, adding the embassy was not closed. A person familiar with the matter said there were no guarantees the embassy would remain open.

The State Department said it would also increase the tempo of Special Immigration Visa flights for Afghans who helped the US effort in the country.

Britain said it would deploy around 600 troops to help its nationals and local translators get out.

As the United Nations warned that a Taliban offensive reaching the capital would have a "catastrophic impact on civilians," the United States and Germany urged all their citizens to leave Afghanistan immediately.

In Qatar, international envoys to Afghan negotiations called for an accelerated peace process as a "matter of great urgency," and for an immediate halt to attacks on cities.

The fall of both Kandahar and Herat was reported by media including the Associated Press. Combined, the cities represent the two biggest prizes yet for the Taliban in their offensive over the past week.

"As you can see, we are inside the Herat police headquarters right now," a Taliban fighter said in a video shared by a group spokesperson, Qari Yousuf Ahmadi.

Earlier on Thursday, the Taliban captured Ghazni, situated on the Kandahar-to-Kabul road some 150 km (90 miles) southwest of the capital.

On Wednesday, a US defense official cited US intelligence as saying the Taliban could isolate Kabul in 30 days and possibly take it over within 90.

With phone lines down across much of the country, Reuters was unable to immediately contact government officials to confirm which of the cities under attack remained in government hands.

The speed and violence of the Taliban offensive have sparked recriminations among many Afghans over President Joe Biden's decision to withdraw US troops, 20 years after they ousted in the Taliban in the wake of the September 11 US attacks.

Biden said on Tuesday he does not regret his decision, noting Washington has spent more than $1 trillion in America's longest war and lost thousands of troops. He added the United States continues to provide significant air support, food, equipment and salaries to Afghan forces.

US Senate Republican leader Mitch McConnell said the exit strategy was sending the United States "hurtling toward an even worse sequel to the humiliating fall of Saigon in 1975."

"President Biden is finding that the quickest way to end a war is to lose it," McConnell said, urging him instead to commit to providing more support to Afghan forces.

"Without it, al Qaeda and the Taliban may celebrate the 20th anniversary of the Sept. 11 attacks by burning down our Embassy in Kabul."

Former State Department spokesperson Morgan Ortagus said it was "a huge foreign policy failure with generational ramifications just shy of seven months into this administration. Everything points to a complete collapse."

In a deal struck with former US President Donald Trump's administration last year, the insurgents agreed not to attack US-led foreign forces as they withdrew. The Taliban also made a commitment to discuss peace.

Given the speed of the Taliban's advance, prospects for diplomatic pressure to affect the situation on the ground seemed limited, although the Taliban spokesman told Al Jazeera: "We will not close the door to the political track."

Al Jazeera reported a government source saying it had offered the Taliban a share in power if the violence stopped. It was not clear to what extent the reported offer differed from terms already discussed in Qatar.

Taliban spokesperson Zabihullah Mujahid said he was unaware of any such offer but ruled out sharing power.

"We won't accept any offer like this because we don't want to be partner with the Kabul administration. We neither stay nor work for a single day with it," he said.

The international envoys in Doha, who met with Afghan government negotiators and Taliban representatives, reaffirmed that foreign capitals would not recognise any government in Afghanistan "imposed through the use of military force."