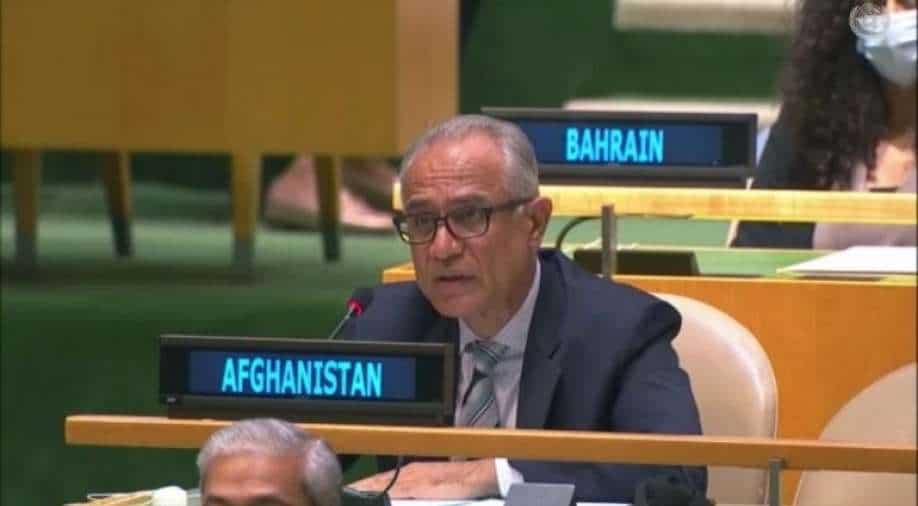 In a strongly worded statement, Afghan envoy to United Nations Ghulam Isaczai has called the announcement by Taliban of the new Afghan govt "anything but inclusive", pointing out that the group must "realize that pacification of the country and true peace can only be established if they pursue an inclusive and participatory government" in the war-torn country.

17 out of the 33 members of the new Afghan government are on the United Nations terror list. The Taliban government is dominated by Pashtuns and has no major representation of the country's major minority groups like Tajiks, Hazaras, Uzbeks. There is also no representation of women in the cabinet, something which is on expected lines.

Also read | We will judge Taliban by its actions, says US on new government

Speaking at High-Level Forum on the Culture of Peace, Isaczai said," Afghan people, especially our youth who have only known a free and democratic Afghanistan, will not accept a governing structure that excludes women and minorities, eliminates constitutional rights for all, and does not protect the gains of the past."

Calling the Taliban's regime as "repressive", the Afghan envoy highlighted that the group, "unseated the elected Government of Afghanistan and gained power through violence and are seeking to reinstate their so-called Islamic Emirate" which is "in violation of the resolution passed by this Assembly less than nine months ago."

August month saw rapid advancement by the Taliban, with Kabul falling on August 15. The pace of Taliban advancement shocked the international community. What followed was a mass exodus of people, foreigners, and Afghans alike leaving the country.

The envoy said, "Taliban may have won the war but have yet to win peace and the hearts of minds of millions of Afghans.". He also made a mention of the ongoing Taliban military offensive in Panjshir, saying, that the group, "continue to choose war over peace as a way of resolving their differences with those who oppose" which is witnessed in the "brutal offensive against the people of Panjshir and suppression of women peacefully demonstrating across cities in Afghanistan."

Tuesday saw massive protests in the Afghan capital Kabul, with protestors chanting anti-Pakistan slogans. Taliban was seen shooting in the air and beating women to disperse the crowd. The anti-Pakistani protests came days after chief of Pakistan's notorious spy agency ISI Lieutenant General Faiz Hameed was seen in a Kabul hotel lobby. He was in the country reports suggest to help the Taliban in the formation of an inclusive government.

He called on UN Member states to "reject the reinstatement of the Islamic Emirate" and hold "Taliban to account for their violations of international human rights and humanitarian law, insist on an inclusive government, and draw a fundamental red line regarding the Taliban’s treatment of women and girls, and respect for their rights."

Important to remember, Myanmar's envoy to UN Kyaw Moe Tun in February speaking on behalf of Aung San Suu Kyi govt called on the international community to end the military coup in his country. The country saw a coup on February 1.

A key decision will be on who will represent Afghanistan at the high-level week of the UNGA later this month. A credential committee, whose new members will be announced on September 14 by President of the 76th session of UNGA Maldives foreign minister Abdulla Shahid will take the call. US, Russia, and China are permanent members of the credentials committee.