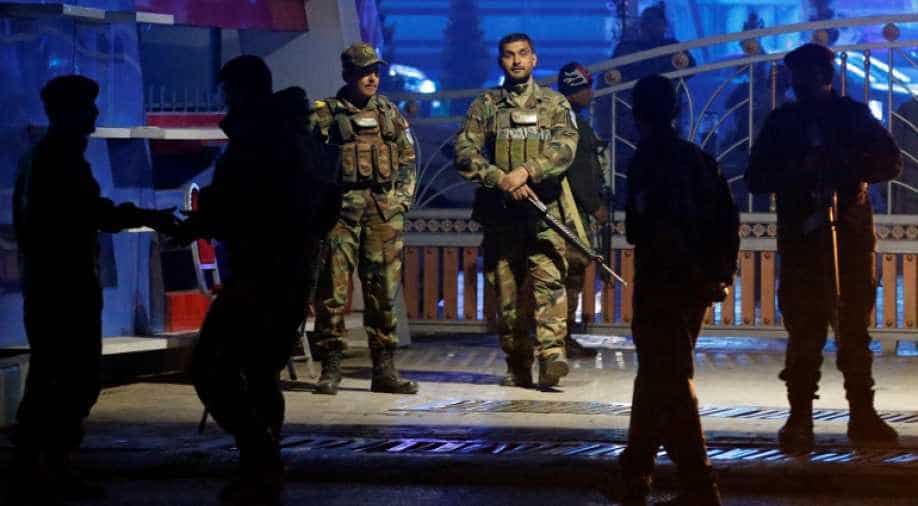 Afghan security forces at the site of a suicide bomb attack in Kabul. Photograph:( Reuters )

The banquet room is in the Uranus wedding hall, a complex housing several large reception rooms near Kabul airport.

A suicide bomber blew himself up in a banqueting hall where Islamic religious scholars had gathered in the Afghan capital Kabul on Tuesday, killing more than 50 people, three government officials said.

Najib Danish, a spokesman for the Interior Ministry, said more than 80 other people had been injured.

"A suicide bomber detonated his explosives inside a wedding hall where Islamic religious scholars had gathered to commemorate the anniversary of the Prophet Mohammad`s birth," Danish said.

The banquet room is in the Uranus wedding hall, a complex housing several large reception rooms near Kabul airport.

"Hundreds of Islamic scholars and their followers had gathered to recite verses from the holy Quran to observe the Eid Milad-un-Nabi festival at the private banquet hall," said a spokesman for Kabul police.

Officials at Kabul’s Emergency Hospital said 30 ambulances had rushed to the scene and over 40 people were critically wounded.

Both the Sunni Taliban militant group and a local Islamic State affiliate have in the past attacked religious scholars aligned with the government -- who have decreed that suicide attacks are forbidden by Islam.

But the Taliban said in a statement that "our men were not involved in the Kabul blast and we condemn the loss of human lives".

The radical Sunni militant group Islamic State has mostly focused its major attacks on Afghan soil on Shi`ite Muslim sites of worship, regarding Shi`ites as heretics.

Afghan security forces have struggled to prevent attacks by Islamist militants since most NATO combat troops withdrew in 2014.

Despite diplomatic efforts to end the 17-year war, in recent months the security situation has deteriorated sharply.

The Kabul government now controls only 56 per cent of Afghan territory, down from 72 per cent in 2015, according to a U.S. government report issued this month.