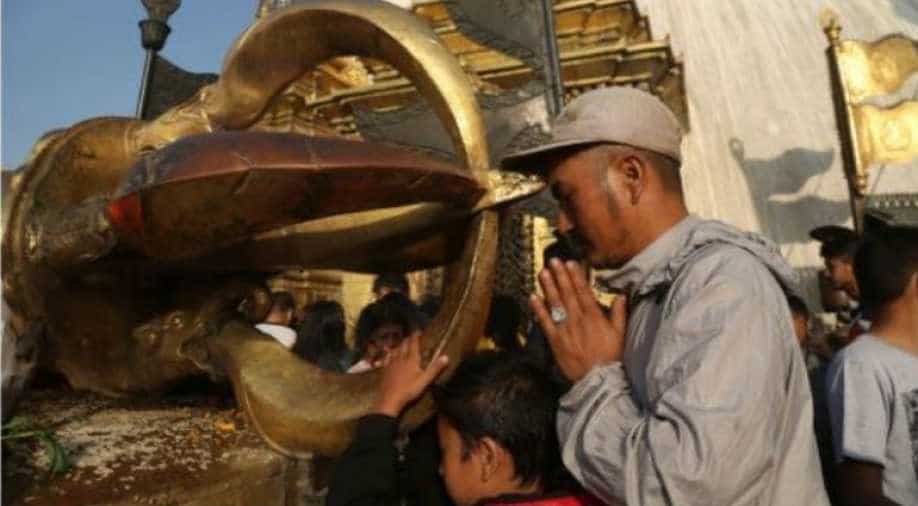 People offer prayers during the celebration of Buddha Jayanti Festival at Swayambhunath in Kathmandu, capital of Nepal. Photograph:( IANS )

Gautam Buddha, also known as Siddhartha Gautam, a prince born to King Suddhodana of the Shakya dynasty of Tilaurakot, which is located in Kapilvastu, Nepal, and Queen Maya Devi.

Buddha Jayanti, the birth anniversary of Lord Buddha, is being celebrated by people across south Asia on Saturday by organising various programmes.

The day, also known as Buddha Purnima, falls on Baishakh Shukla Purnima as per the lunar calendar, which is a full moon day, The Himalayan Times reported.

The day has a special significance to the people belonging to the Buddhist and Hindu communities.

Gautam Buddha, also known as Siddhartha Gautam, a prince born to King Suddhodana of the Shakya dynasty of Tilaurakot, which is located in Kapilvastu, Nepal, and Queen Maya Devi.

On this day, people visit Buddhist monasteries and shrines to worship Lord Buddha, who is believed to be the epitome of peace, based on whose teachings Buddhism was founded.

To celebrate this occasion, Prime Minister KP Sharma Oli reached Lumbini yesterday (May 17) evening to participate in the events planned for the day, while President Bidya Devi Bhandari is scheduled to reach there today to attend various programmes in the evening.

According to Lumbini Development Trust, President Bhandari, chief guest of the occasion, is scheduled to officially inaugurate the Visit Lumbini Year 2076 of the next Bikram Samvat calendar.

The auspicious day, also known as Vesak in Sri Lanka, is being observed with much devotion and faith.

In his message to mark the Vesak Poya Day, Sri Lankan President Maithripala Sirisena also called on to make the teachings of Lord Buddha, a path that leads the country towards prosperity and a society that is safe and secure, Colombo Page reported.

The security measures were adopted following the eight coordinated bombings on April 21 that rattled three churches and three high-end hotels located across the country and killed more than 250 people who were celebrating Sunday Easter.

Meanwhile, United States Secretary of State Michael R Pompeo also sent greetings to everyone observing the Vesak Day, saying, "On behalf of the people of the United States of America, I send wishes of peace and joy to everyone celebrating Vesak Day on May 18."

The Buddhist community in the United States contributes to the strength of our country and our people, and Buddhism has contributions to the world over more than two thousand years have enriched our culture and our history.

"May you all enjoy a peaceful and joyful Vesak," he added.

Buddha, a teacher, and a philosopher is believed to have received his enlightenment in Bodh Gaya in the Indian state of Bihar, following which he started sharing his knowledge with his disciples.