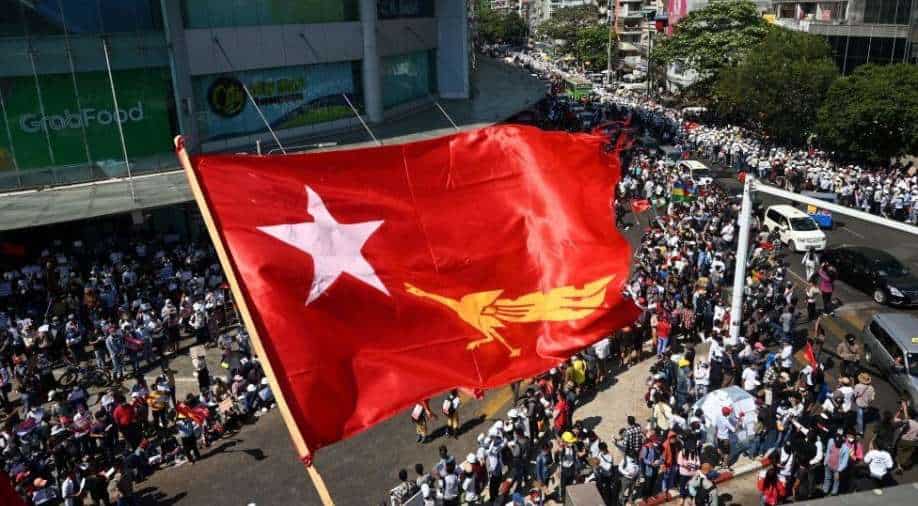 Much of the country has been in uproar since the military deposed civilian leader Aung San Suu Kyi in a coup on February 1, with hundreds of thousands of demonstrators taking to the streets to protest against the junta.

"Six men with gunshot wounds arrived to our team. Two are seriously injured," a medical aide to the doctors said.

Much of the country has been in uproar since the military deposed civilian leader Aung San Suu Kyi in a coup on February 1, with hundreds of thousands of demonstrators taking to the streets to protest against the junta.

Authorities have since arrested hundreds of people. Many of these detainees are civil servants who had been boycotting work as part of a civil disobedience campaign.

On Saturday, hundreds of police gathered at Yadanarbon shipyard in Mandalay, on the Irrawaddy river.

When protesters started yelling at the police to leave, police opened fire with rubber bullets and slingshot balls, dispersing the alarmed protesters and leaving at least six injured.

Since the nationwide protests started two weeks ago, authorities in some cities have deployed tear gas, water cannon and rubber bullets against demonstrators.

There have been isolated incidents of live rounds in the capital Naypyidaw.

A young woman protester died on Friday after being shot in the head last week as police dispersed a crowd in the capital, Naypyitaw, the first death among anti-coup demonstrators.

The army says one policeman died of injuries sustained in a protest.

On Saturday, young people in the main city of Yangon carried a wreath and laid flowers at a memorial ceremony for the woman, Mya Thwate Thwate Khaing, while a similar ceremony took place in Naypyitaw.

The demonstrators are demanding the restoration of the elected government, the release of Suu Kyi and others and the scrapping of a 2008 constitution, drawn up under military supervision, that gives the army a major role in politics.

Insurgencies by ethnic minority forces seeking autonomy have simmered since Myanmar's independence from Britain in 1948, and the army has long proclaimed itself the only institution capable of preserving national unity.

Suu Kyi, 75, like the top generals, is a member of the majority Burman community.

Her government promoted a peace process with insurgent groups but she faced a storm of international criticism over the plight of the Muslim Rohingya minority after more than 700,000 fled a deadly 2017 army crackdown.

Insurgent groups that have signed a national ceasefire made clear their opposition to army rule, saying in a statement they would aim to "coordinate with local and foreign forces" and the international community to "eliminate dictatorship".

The army seized back power after alleging fraud in November 8 election that Suu Kyi's National League for Democracy swept, detaining her and others. The electoral commission had dismissed the fraud complaints.

The protests have so far been more peaceful than the bloodily suppressed demonstrations during nearly 50 years of direct military rule up to 2011.