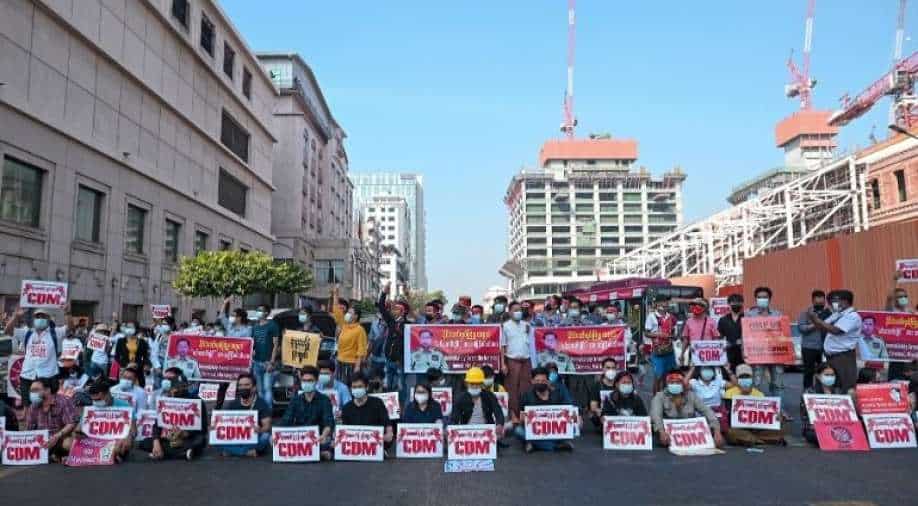 Demonstrators hold signs during a protest against the military coup in Yangon, Myanmar, February 17, 2021 Photograph:( Reuters )

Swarms of thousands of protesters marched the streets in Myanmar on Wednesday while continuing to reject the army’s claims that the people support the coup.

The army asserted that people had given support to overthrowing Aung San Suu Kyi. But the protesters vehemently deny this, while also reasserting that they will not give in to the military rule.

The police recently filed a fresh charge Suu Kyi, which could extend her detention indefinitely. And critics of the coup do not readily trust assurances given by the junta.

Suu Kyi, a Nobel Peace laureate has been detained since the beginning of the coup. She now faces the charge of violating a Natural Disaster Management Law, along with charges of illegally importing six walkie talkie radios. The next hearing is scheduled for March 1.

"We love democracy and hate the junta," Sithu Maung, an democratically elected member of Suu Kyi's National League for Democracy (NLD) said during a protest at the Sule Pagoda in Yangon. "We must be the last generation to experience a coup”, Maung said.

Brigadier General Zaw Min Tun, the spokesman for the council claimed on Tuesday that out of the 53 million people in Myanmar, 40 million support the military’s action.

Sithu Maung, while referring to that, said - "We're showing here that we're not in that 40 million”. On November 8, Suu Kyi’s party won the elections in the country. But the army claimed that the victory was fraudulent.

The military also claims that it seized power in absolute sync with the country’s constitution, and that it remained committed to democratic rule.

"They said there was vote fraud but look at the people here," a protester was quoted by Reuters as saying.

Since February 6, the coup in Myanmar has triggered protests across different parts in the country. The takeover by the military has also been vehemently criticised by western governments, with anger flowing in especially from the US and the UK. The fresh charges against Suu Kyi have especially drawn ire.