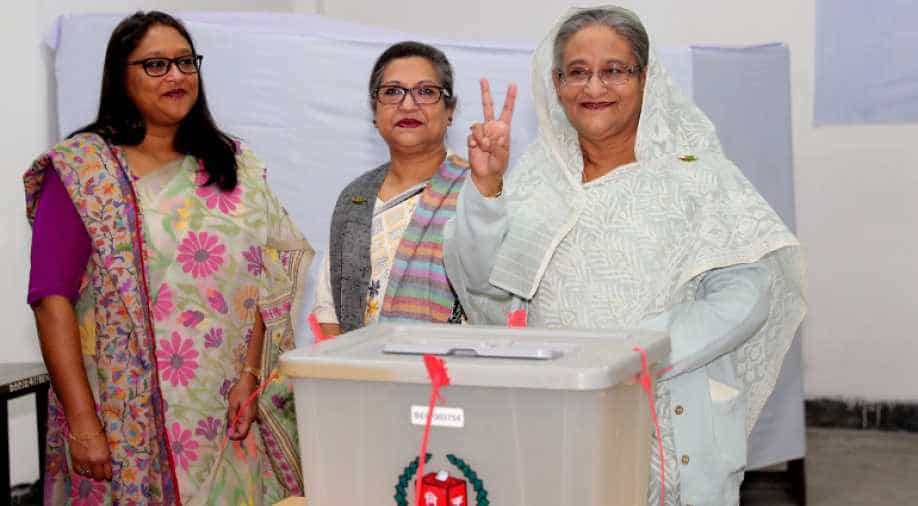 Prime Minister Sheikh Hasina gestures after casting her vote in the morning during the general election in Dhaka, Bangladesh. Photograph:( Reuters )

Bangladesh went to the polls on Sunday after violence-plagued campaigning, with Prime Minister Sheikh Hasina confident of a third straight term in a face-off against an opposition whose leader is in jail charged with corruption.

Bangladesh went to the polls on Sunday after violence-plagued campaigning, with Prime Minister Sheikh Hasina confident of a third straight term in a face-off against an opposition whose leader is in jail charged with corruption.

Mobile internet was blocked and the streets of the capital were largely deserted as many had left to vote in their hometowns. Others were seen trickling into polling booths, where posters bearing the ruling party's "boat" symbol far outnumbered those of the opposition.

Millions of young new voters are registered to vote in the South Asian nation's first fully competitive general election in a decade. The main opposition Bangladesh Nationalist Party (BNP) boycotted the last election in 2014 claiming it wouldn't be free and fair.

The Awami League, which has touted an improved economy and development, is widely expected to win.

"I will freely vote for whom I want," said Manjur Ahmed, 23, a first-time voter who had come to a polling station with his father. "I want the development of the country to continue. I realise some people are nervous but I am not."

The BNP has been hobbled by the absence of its leader, former Prime Minister Khaleda Zia, 74, who has been in jail since February on corruption charges which she says are politically motivated.

It stitched together the National Unity Front alliance with smaller parties three months ahead of the polls, but has alleged its supporters and candidates faced attacks and intimidation, including shootings and arrests, at the hands of ruling party activists during the campaign. The army is deployed across the country, but some BNP leaders and a European diplomat said they feared the election would be rigged.

Hasina's party dismissed the accusations, saying the opposition has been making "one false allegation after another for months prior to election as polls show a landslide victory" for the ruling party.

"I believe that people will cast their votes in favour of Awami League to continue the pace of development," Hasina told reporters in Dhaka. "The 'boat' will surely win. I believe in democracy and I have confidence in the people of my country."

She has already invited foreign journalists and poll observers to her official residence on Monday, by which time the election result is expected to be known.

Over the same period, annual sales of its economic mainstay, the garment industry, nearly tripled, with garment exports worth $30.6 billion in 2017/18, making up 83.5 per cent of total exports. Bangladesh's garment industry is the world's second biggest after China. One of Hasina's top jobs if she retains power will be to address demands by garment workers for a higher minimum wage.

But she has faced accusations of increasing authoritarianism. Her son, Sajeeb Wazed, told Reuters on Saturday Hasina regarded such accusations by "Western media" as a "badge of honour".

At a polling booth set up in a high school in old Dhaka on Sunday, some were afraid to comment on the polls, describing an atmosphere of fear.

"I hope the result will be good for us and 'boat' will win," said a polling agent, Mohammed Selim Raj. "Boat is the symbol of our liberation."

A middle-aged businessman who declined to be named said: "I am here to vote, but my family says, 'what's the point?' The ruling party will come back in power in any case."

Hasina has been praised internationally for providing refuge to Rohingya Muslims fleeing persecution in neighbouring Myanmar, but her government is accused of suppressing dissent and jailing critics.

The United States, which has urged Bangladesh to ensure the vote is free and fair, said opposition party candidates had "borne the brunt of most violence" in recent weeks. "Think before you act violently!" the US embassy said on Twitter. "Your country depends on it."

Hasina and Khaleda have alternated in power for most of the last three decades and this is the first election the BNP has contested without its leader.

After intensive efforts by the BNP to get Khaleda out of jail failed, her son, Tarique Rahman, who is wanted in Bangladesh accused of masterminding a 2004 plot to kill Hasina, appealed to women, who make up nearly half the 100 million voters, on Facebook.

"This is my appeal to every mother, every woman in Bangladesh: only you can get her reunited with her family through the collective power of each of your votes," he said.