Pakistan warns of 'blowback' from moving too fast against militants 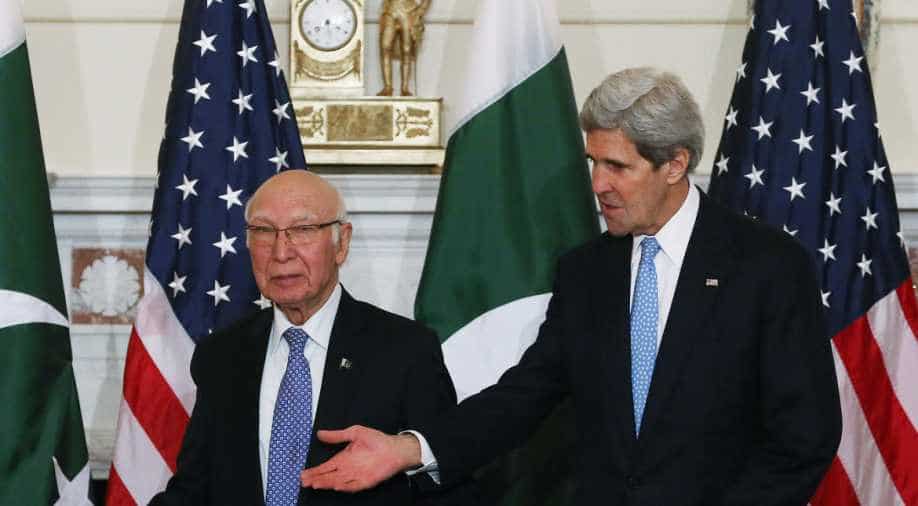 Sartaj Aziz (left) added that there was a need to move at a measured pace and in a more decisive way. Photograph:( Getty )

Pakistan's top foreign policy official said today that pushing too fast against all Islamist militants in the country could lead to "blowback" in the form of more terrorist attacks.

Sartaj Aziz, Pakistan's federal cabinet in-charge of foreign affairs, sought to deflect criticism that Pakistan has not done enough to crack down on the Haqqani network and that it still shelters Afghan Taliban leaders, highlighted by the US drone strike that killed Taliban chief Mullah Akhtar Mansour in May.

Aziz said he would defend Pakistan's record of fighting militants when meeting this weekend with a US congressional delegation headed by Senator John McCain, chairman of the Senate Armed Forces Committee.

"I think what we have achieved in these three years is quite remarkable," he said, citing the ongoing military operation to destroy militant hideouts in North Waziristan near the Afghan border.

The military operation in North Waziristan targeted loosely allied fighters, including the Pakistani branch of the Taliban - which fights to overthrow Pakistan's government.

Also based in the area were elements of the Afghan Taliban and the Haqqani network, which direct their attacks across the border to target the US-backed government in Afghanistan.

Critics, particularly in the US Congress, say Pakistan has spared the militants that limit their attacks to inside Afghanistan.

Sartaj said the military acted "without distinguishing between 'good and bad' Taliban" but suggested that seeking a large-scale crackdown on all at once would overstretch the armed forces and lead to more terrorist attacks.

"So we have to make sure that we move in a decisive way, but at a measured pace and according to our capacity, and ensuring that the blowback is manageable," he said.

He also downplayed strained relations with the US following the May 21 US drone strike that killed Mansour and Congress's blocking of financing for Pakistan to buy American F-16 fighter jets.

"I don't see the relations are tense at the moment," Aziz said. "They are moving in the right direction and there are of course differences, but I don't think there is any major crisis in the relationship."