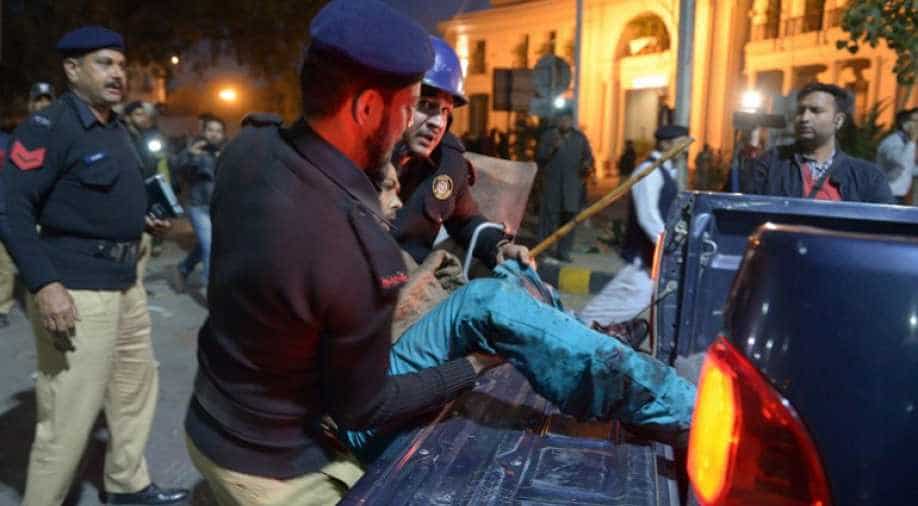 Pakistani policemen move an injured blast victim into a vehicle after a powerful explosion. Photograph:( AFP )

'The suicide bomber hit the security officials exactly as it was planned,' the spokesperson for Tehreek-e-Taliban Pakistan (TTP) said in a statement

The Pakistani Taliban claimed responsibility Thursday for a deadly suicide blast at a luxury hotel hosting the Chinese ambassador in the southwest of the country, as officials raised the death toll to five.

Beijing said it strongly condemned the attack, although the Taliban said Pakistan security officials were the target of the blast.

The bomber detonated the explosives late Wednesday while inside a vehicle in the car park of the Serena hotel -- part of a five-star chain popular with diplomats and aid agencies -- in the city of Quetta, capital of Balochistan province, police and the interior ministry said.

"The suicide bomber hit the security officials exactly as it was planned," the spokesperson for Tehreek-e-Taliban Pakistan (TTP) said in a statement.

Also Read | 'Pakistan helped the Taliban, played on both sides in Afghanistan': US senator

The country's interior minister confirmed a suicide bomber had carried out the attack, as he pinned the blame on a "foreign hand".

"Our agencies will fight the efforts which are being made in the neighbouring country to reorganise the TTP," said interior minister Sheikh Rashid Ahmed.

Pakistan frequently accuses India of using insurgent groups, including in Afghanistan, as proxy forces to wage an ongoing shadow war between the arch-rivals.

Describing the blast as a "terrorist attack", China's foreign ministry spokesman Wang Wenbin said in Beijing that the Chinese delegation was not present when the bomb detonated.

Gu Wenliang, agriculture commissioner at China's embassy in Pakistan, told the Chinese newspaper Global Times that the bomb had detonated 10 minutes before their expected return.

"I was walking through the car park when I heard a sudden loud sound and the earth shook under my feet," said Khuda Baksh, a guard at the hotel.

"Everyone was running for their lives before I lost consciousness," he told.

For years the TTP unleashed deadly attacks on urban centres across Pakistan from their bases along the Afghan border, where they provided shelter to an array of global jihadist groups including Al Qaeda.