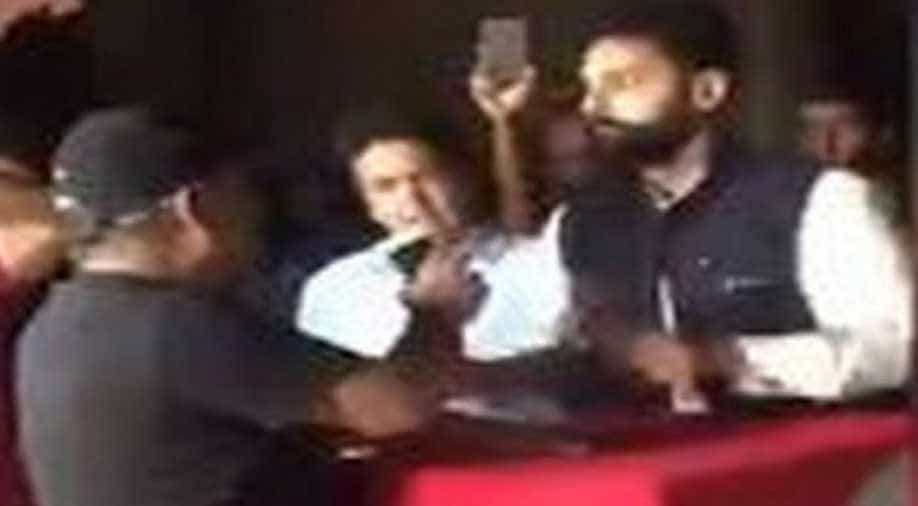 In yet another instance of muzzling of media in Pakistan, a press conference by activist Jibran Nasir was disrupted by an official for criticising the shutting down of an art exhibition depicting the extrajudicial killings in Karachi.

"The moment we mentioned that Intel Officers harassing us since morning are surrounding the Press Conference this man introducing himself as DG Parks barged in threw down mics of media, ripped a mic off my collar and tried to get physical. All for #RaoAnwar #RiyasatKaLaadla," Nasir wrote on Twitter.

Videos shared by the activist on his twitter handle show an official taking away the media mics and preventing the activist from expressing his opinion.

The presser was held following the shutting down of a contemporary art exhibition titled `Killing Fields of Karachi` by artist Adeela Suleman held at city`s iconic Frere Hall as part of the Karachi Biennale 2019.

The exhibition, titled `Karachi`s Killing Fields` highlighted the extra-judicial killings in the city by a police officer.

Over 400 concrete tombstones were set up at Frere Hall for the Karachi Biennale by Adeela Suleman to represent the human cost of police brutality as part of her art installation.

It was made as a memorial for the 444 people allegedly killed in by former Malir SSP Rao Anwar.

"In the 2nd annual #KarachiBiennale in which artists all over the world are participating today ISI official came and forcibly shutdown exhibition by artist #AdeelaSuleman on the 444 people killed by #RaoAnwar. Wonder why? Our Institutions are supposed to be our pride or disgrace?" he said.

The incident marks yet another instance of curtailment of media freedom and the suppression of the voice of dissent in Pakistan.

A report by the Commission for Protection of Journalists (CPJ) earlier this year stated that the situation of the press and media in Pakistan is now more than alarming and manifests itself in increasingly insidious and more difficult ways to fight.