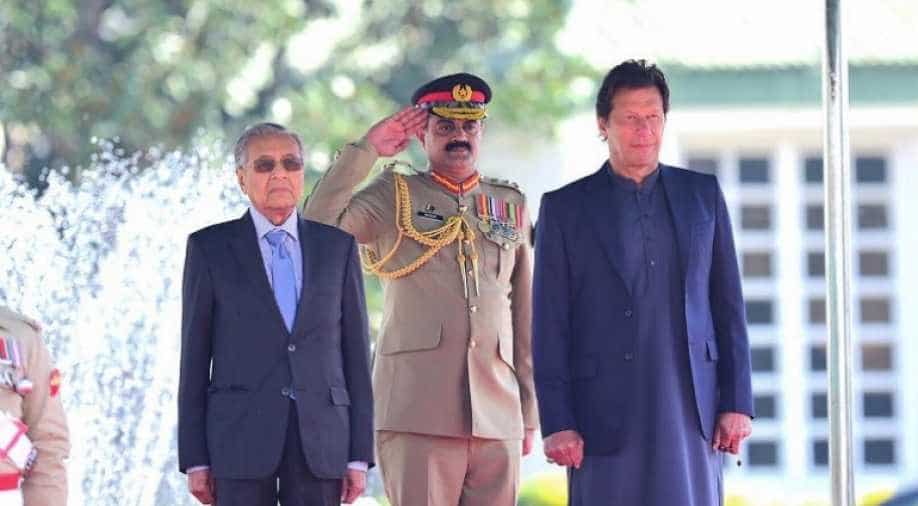 Mahathir held talks with Khan at one-on-one and delegation level, according to a joint statement.

The deliberations are part of Malaysian Prime Minister's ongoing 3-day visit to the Muslim-majority nation. He arrived in Islamabad on Thursday.

Mahathir held talks with Khan at one-on-one and delegation level, according to a joint statement.

"Both Leaders agreed that the existing relations between Pakistan-Malaysia be elevated to a strategic partnership. It marked a new level of the bilateral cooperation between both countries in various fields, namely trade in palm oil, agricultural products, food retail, halal products, automotive parts, energy, science and technology, and telecommunication investment," according to joint statement.

Both sides reaffirmed their shared desire to maintain close high-level contacts, deepen friendly exchanges of visits and cooperation in all fields, as well as, to actively promote Pakistan-Malaysia relations.

The two side agreed to promote cooperation in the automotive industry and the two Prime Ministers jointly officiated the symbolic ground-breaking ceremony of PROTON plant in Islamabad to boost the manufacturing and services industry for both countries.

The two nations reaffirmed the importance of the cooperation between the private sectors of both countries and both leaders witnessed the signing of agreements and Memorandum of Understandings (MoUs) for investment and cooperation, particularly in the telecommunication sector.

Earlier, Advisor to Prime Minister Khan on Commerce Razzak Dawood said that MoUs worth USD 800-900 million would be singed but their exact worth was not declared after signing ceremony.

However, Finance Minister Asad Umar told the media that MoUs were about five big projects?. He also said that Malaysia was interested in buying JF-17 Thunder jets from Pakistan.

According to the joint statement, the two leaders acknowledged that MoU singed for the investment would serve to promote and strengthen the economic ties between both countries.

Malaysia expressed hope that Pakistan would continue to import more Malaysian palm oil and palm oil-based products, as well as, remove any non-tariff barriers on Malaysian goods and products.

Both stressed that terrorism cannot be associated with any religion or belief.

The two leaders also spoke against rising Islamophobia and agreed that steps should be taken to address this issue.

"Pakistan and Malaysia both understand the need to find ways to combat Islamophobia. This is our priority. We must work to improve the perception of Muslims in the world. We must change the prevailing atmosphere of fear. We must also realise that fighting back does not always mean killing each other," said Mahathir.

Mahathir will be the guest of honour at Pakistan Day parade on Saturday.