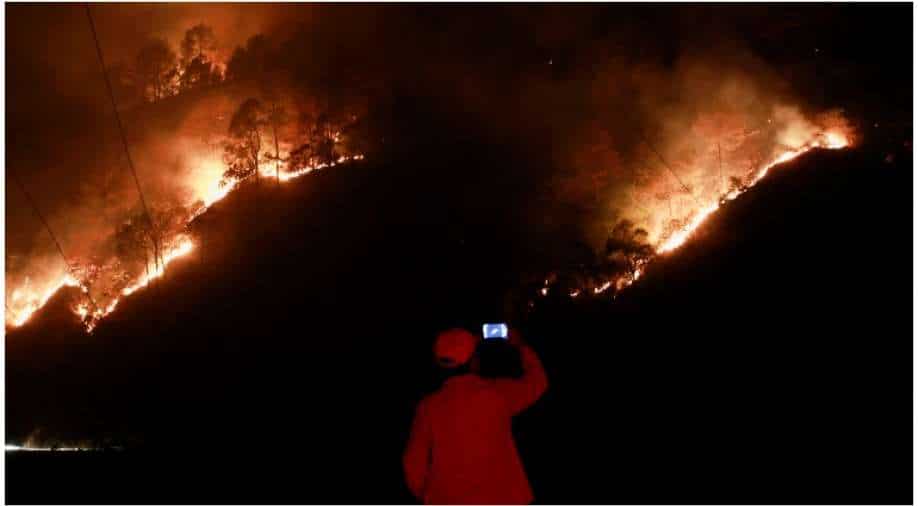 A man takes pictures from his phone during a forest fire in Makwanpur, outskirts of Kathmandu, as forest fires have raged many areas in Nepal contributing to worst air quality in the bowl shaped Kathmandu, Nepal April 8, 2021 Photograph:( Reuters )

Nepal is witnessing worst forest fires in years. Five people have died so far trying to put out the fires that have been raging since January as per an official quoted by Reuters. The fire has given rise to a lot of smoke that has wafted across that mountain and creating air quality issues as it settles around capital Kathmandu.

A senior official of Nepal's National Disaster Risk Reduction and Management Authority said that wildfires were burning in at least 60 places across 22 of Nepal's 77 administrative districts.

Details on losses from the fires are still being collected, Sharma said. This has been the worst fire season by number since 2012, when the government started keeping records.

"Forest fires are the main reason for the rising air pollution in Kathmandu and many other places," Sharma told Reuters.

"Wildfires could hit the peak later this month if the ongoing dry spell continued," he said.

Forest fires often erupt in Nepal during the January-May dry season, when villagers burn dry leaves in the woodlands to prompt fresh grass growth for their cattle.

Sharma said the number of fires this year were 15 times more than those occurring in 2020. He didn't immediately have a reason for the increase.

The air quality index (AQI) in Kathmandu was at an unhealthy level of 174 on Friday, according to data published on iqair.com, a site that monitors air quality. An AQI level below 50 is considered good.