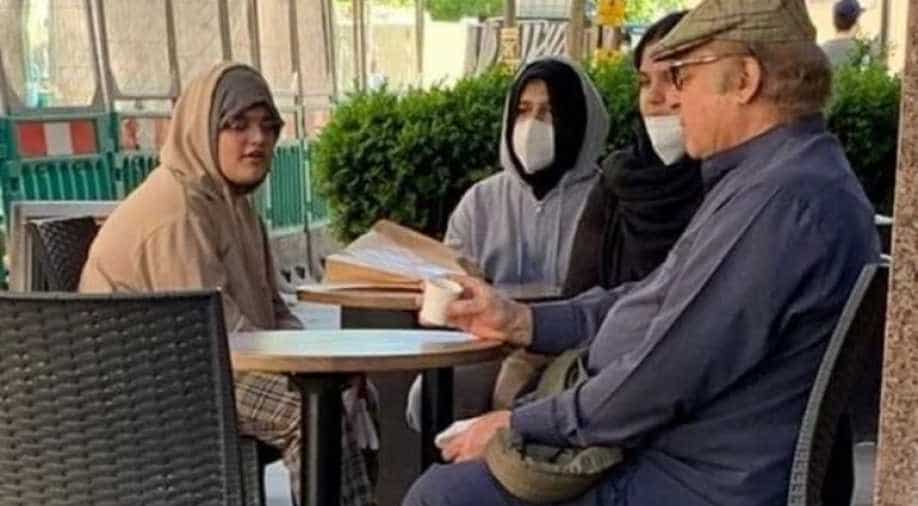 In the picture, the 70-year-old three-time premier is seen sitting at a roadside caf? with his granddaughters. He sported a blue shalwar kameez and a cap and apparently looked in better health.

A fresh picture of Pakistan's 'ailing' former prime minister Nawaz Sharif taking tea at a London cafe along with some members of his family went viral on social media, sparking a debate on his health with the ruling Pakistan Tehreek-i-Insaf members demanding his return to face corruption cases.

In the picture, the 70-year-old three-time premier is seen sitting at a roadside cafe with his granddaughters. He sported a blue shalwar kameez and a cap and apparently looked in better health.

Some ministers got skeptical about the serious nature of his health, saying Sharif is roaming on London streets and he even did not bother to wear mask in this COVID-19 testing time.

"This picture of Sharif having tea in cafe is exposing our law, justice and judicial system. This picture also tells how much people can trust on the accountability system in the country," Science Minister Fawad Chaudhry said.

Prime Minister's adviser Shahbaz Gill said that Sharif had gone abroad after lying in the court. "The Sharifs think the people are fool," Gill said and asked Mr Sharif to return Pakistan to face corruption cases against him.

Punjab Information Minister Fayyazul Hasan Chohan questioned about Sharif roaming on London's streets without a mask. He should be brought back to face corruption cases against him.

As the picture went viral on social media on Saturday it became top trend, sparking a debate about Sharif's health with his detractors asking why he does not return to Pakistan if he is well while his supporters expressed joy at seeing their leader in good health and spirits.

Sharif's daughter Maryam Nawaz claimed that the picture of the PML-N supreme leader was released by 'some elements' with an intention to humiliate him.

"Like in the past practice they (an apparent reference to the establishment) wanted to humiliate him by leaking his picture. But the response to it was otherwise. The supporters of him got happy to see him. His detractors must learn from this," she said.

She said when her mother was in the ICU in a London hospital, such elements even tried to take her picture forcibly'. "For them to take Nawaz Sharif and his family's women's pictures is not difficult," she said in a tweet.

Shahbaz Gill, however, claimed that the PML-N itself had leaked this picture of Sharif to tell its workers that he is fine and "very much in-charge of the party". He said the PML-N workers were looking up to Sharif's younger brother Shahbaz Sharif that is why the party had to leak this picture.

Earlier in January, a picture of Sharif having tea at a London restaurant had gone viral, inviting a lot of criticism and raising suspicion that he might have gone out of Pakistan ?under some deal'.

Defending this and previous "leaked" pictures, PML-N spokesperson Marriyum Auranzeb said: "Mr Sharif had gone out to have a walk as per doctors' advice."

Sharif in November last had left for London after the Lahore High Court granted him a four-week permission allowing him to go abroad for his treatment.

He had given an undertaking to the Lahore High Court to return to Pakistan citing his record to face the process of law and justice within four weeks or as soon as he is declared healthy and fit to travel by doctors.

Sharif was also given bail in the Al-Azizia Mills corruption case in which he was serving seven-year imprisonment in Lahore's Kot Lakhpat jail.

Sharif, who was diagnosed with an immune system disorder, has been advised by a PTI government's panel of doctors to go abroad for treatment. He had been diagnosed with a complicated coronary disease.

According to his daughter, Sharif's cardiac surgery had been postponed due to the coronavirus pandemic.