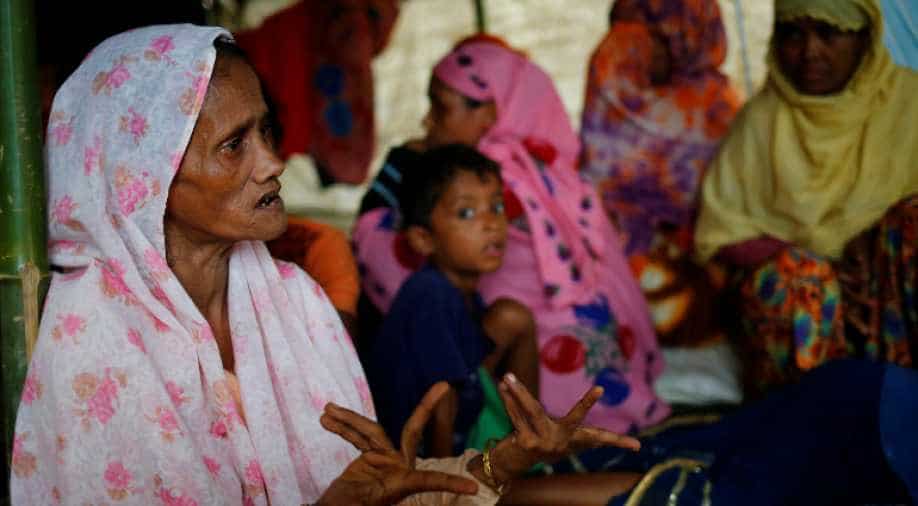 Members of the small Hindu minority appear to have been caught in the middle. Photograph:( Reuters )

Myanmar government forces found on Sunday the bodies of 28 Hindu villagers who authorities suspected were killed by Muslim insurgents last month, at the beginning of a spasm of violence that has sent 430,000 Muslim Rohingya fleeing to Bangladesh.

The latest violence in western Myanmar's Rakhine State began on Aug. 25 when ARSA militants attacked about 30 police posts and an army camp, killing about 12 people.

Thousands of Hindus have fled villages where they once lived alongside Muslims, alleging that they were targeted by militants whose August 25 raids plunged Rakhine into communal violence

The United Nations has described as ethnic cleansing a sweeping government offensive in the north of Rakhine State in response to those attacks.

The government of Buddhist-majority Myanmar has said more than 400 people have been killed, most of the insurgents. It rejects accusations of ethnic cleansing, saying it is fighting terrorists.

Members of the small Hindu minority appear to have been caught in the middle. Some have fled to Bangladesh, complaining of violence against them by soldiers or Buddhist vigilantes. Others have complained of being attacked by the insurgents on suspicion of being government spies.

The government said a search was mounted near Ye Baw Kya village in the north of Rakhine State after a refugee in Bangladesh contacted a Hindu community leader in Myanmar. The refugee said about 300 ARSA militants had marched about 100 people out of the village on Aug. 25 and killed them.

Twenty of the dead were female and eight were male children, the government said.

Around 30,000 Hindus and Buddhists based in the area have also been displaced by the violence.

"They forced eight female villagers to convert to the Islamic religion and took them to Bangladesh," the government said.

Access to the area by journalists as well as human rights workers and aid workers is largely restricted and Reuters could not independently verify the report.

An ARSA spokesman said he believed Buddhist nationalists trying to divide Hindus and Muslims were behind the "lies" that ARSA militants had killed the villagers.

"ARSA has internationally pledged not to target civilians and that remains unchanged no matter what," the spokesman, who is based in a neighbouring country and identified himself only as Abdullah, told Reuters through a messaging service.

The violence in Rakhine State and the exodus of refugees is the biggest crisis the government of Nobel laureate Aung San Suu Kyi has faced since it came to power last year as part of a transition away from nearly 50 years of harsh military rule.

Bangladesh and aid organisations are struggling to help the Rohingya refugees there, while aid agencies fear a humanitarian crisis is unfolding in the north of Rakhine State, where rights groups say nearly half of all Muslim villages have been torched.

The United States and the United Nations have called for an end to the violence, unfettered humanitarian access to the conflict zone and for the right of those who have fled to go home safely.

Suu Kyi has faced a barrage of international criticism for not speaking out more forcefully against the violence or doing more to rein in security forces over which she has little power.

The chairman of the Association of South East Asian Nations (ASEAN), of which Myanmar is a member, issued a statement urging all parties to avoid worsening the situation on the ground and calling for a "viable and long-term solutions to the root causes of the conflict".

Muslim-majority Indonesia and Malaysia have expressed concern about the situation, with Malaysia in particular being critical of Myanmar.

In a rare show of disagreement in the 10-member grouping, Foreign Minister Anifah Aman later said Malaysia disassociated itself from the statement as it misrepresented the "reality of the situation" and did not identify the Rohingya as one of the affected communities.

Myanmar objects to the term Rohingya, saying the Muslims of Rakhine State are not a distinct ethnic group but illegal immigrants from Bangladesh.

This month, Malaysia summoned Myanmar's ambassador to express displeasure over the violence in Myanmar. It also "expressed grave concerns over such atrocities which have unleashed a full-scale humanitarian crisis".