Suu Kyi's government on test as Myanmar readies for by-elections 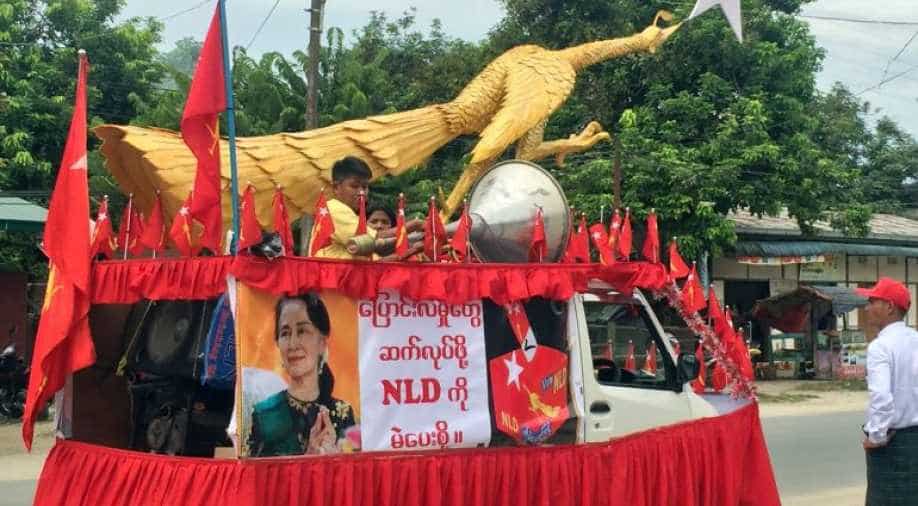 Suu Kyi is trying to solve all the country's problems, she said. 'It's not easy to achieve that by walking alone, by herself,' she said.

Asked what Nobel laureate Aung San Suu Kyi has changed since becoming Myanmar's leader two years ago, most residents of Kachin state in the far north say the roads: new tarmac smoothes the path for cars, motorbikes and campaign trucks ahead of a by-election set for Saturday.

But beyond the city limits, near-perpetual civil war rumbles on. Many here say the administration's inability to tackle the country's toughest problems, including continued ethnic fighting, has soured the mood among voters ahead of polls this weekend being closely watched as a barometer on Suu Kyi's government and the future of Myanmar's democratic transition.

Suu Kyi swept to power pledging that a peace process to end Myanmar's myriad ethnic conflicts was her top priority. But since then Kachin has seen some of the most intense fightings between the military and ethnic rebels since a ceasefire broke down seven years ago, with thousands of people displaced.

"We voted for her and she won and came into power," said 40-year-old Htu Lun, who was driven from her home in 2011 and has since lived in one of the dozens of displacement camps in Myitkyina, the state capital.

"But in reality, nothing has changed. Now the election time has come again, we will choose the party that serves our interest."

Thirteen seats in the upper and lower houses of parliament and regional assemblies across Myanmar are being contested in Saturday's by-elections. Eleven fell vacant when legislators died in office, a reflection of Myanmar's ageing political leadership, while one MP, Win Myint, became president.

The election of the NLD in late 2015 brought an end to half-a-century of junta rule but the new government, which must still share power with the military, is now facing multiple crises.

The army has been accused by UN rights investigators of acting with "genocidal intent" against Rohingya Muslims in a crackdown in western Rakhine state last year. Meanwhile, the economy has slowed and peace talks with rebels from Kachin and other ethnic minority areas have faltered.

Suu Kyi's administration has no control over the army, but has denied almost all the allegations against troops in Rakhine. NLD spokesman Myo Nyunt told Reuters economic progress has stalled but not reversed, and the expectations of the people were too high. Making peace is the government's top priority, he said, but all parties, including ethnic leaders and the military, have to co-operate.

While several of the seats up for grabs on Saturday lie in the country's Buddhist heartland and are likely to remain under NLD control, representatives of the ruling party have voiced jitters about areas where they face stiff competition from ascendant ethnic parties.

Low turnout in some places could skew the result against the NLD, analysts said. Though Myitkyina is one of the most hotly contested seats, several people there whom Reuters spoke to were not aware a by-election was taking place, while others said they did not plan to vote.

"This time we have to struggle for victory – it will not be easy," said Aung Shin, a spokesman for the NLD.

Yan Hkawn, the party's candidate in the city, said the vote would likely be split.

Suu Kyi is trying to solve all the country's problems, she said. "It's not easy to achieve that by walking alone, by herself," she said.

"Daw Suu Kyi promised us, 'We will change everything, everyone will get equal rights',” said Win Aung, an 80-year-old Muslim leader, sitting by the side of the road after watching campaign trucks bearing her face pass by.

But religious discrimination against Christians – the majority in Kachin state – and Muslims has continued, he said.

"We need permission when we are planning a religious ceremony," he said. "Still now, we never get permission."

"The person who understands Myanmar politics will know that a huge number of religious fanatics exist," he told Reuters. "We can't change that in a short time."

As well as more than 700,000 Rohingya forced to flee Rakhine for Bangladesh after the military crackdown in 2017, more than 68,000 people have been internally displaced by fighting in Kachin and northern Shan state since January 2017, according to the UN Organisation for the Coordination of Humanitarian Affairs.

In an October report published by the independent election monitoring group PACE, a quarter of respondents said ethnic conflict had worsened since the NLD took power.

Six of the seats being contested on Saturday are in ethnic areas, and analysts are watching the result for signs of what might happen when the country goes to the polls in the next general election in 2020.

In recent months, minority parties that previously competed against one another have merged to run under one banner, forming alliances that could pose a strong challenge to the NLD, which currently holds a comfortable majority in parliament despite the constitution reserving 25 per cent of seats for the military.

"We can see that the ethnic movement in the election is quite powerful," said Yangon-based analyst Maung Maung Soe. "If there is no landslide win like in 2015, it will be difficult for the NLD to form a government by itself. We have to prepare for an alliance or to combine with the ethnic parties."

In Kachin, four ethnic parties are competing under the banner of the Kachin Democratic Party, after a recent merger that resulted from five years of negotiation, according to its leader, Gumgrawng Awng Hkam.

The former activist, who spent years in exile under the junta, was once a strident supporter of Aung San Suu Kyi. He said her government had failed to be transparent in its response to allegations of human rights abuses against the Rohingya in Rakhine or express sympathy for the suffering of ethnic Kachin.

"She dropped the hand of ethnic and democratic allies and took the hand of the military," he said, sitting in the party headquarters in Myitkyina.

His vision is for a grand alliance of ethnic parties that could mount a strong challenge to the NLD in 2020.

"We cannot form a government by ethnic forces by ourselves," he said. "We will make an alliance with the party which is harmonious for us ... There are no constant enemies, no constant friends in politics."