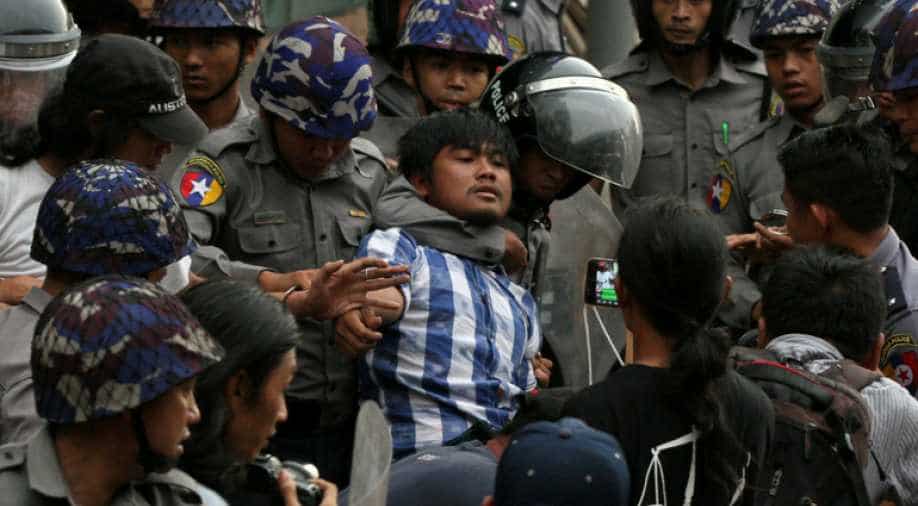 Myanmar student activist Zayya Lwin said on Tuesday that police planned to press additional charges against him after he was detained on the weekend following a peace rally and criticised police at a poem-reading event in Yangon two days later.

Zayya Lwin, 27, is one of 17 organisers of the anti-war protest which on Saturday degenerated into scuffles and fistfights, raising fresh concerns about freedom of speech in the Southeast Asian nation.

The 17 organisers now face a month in prison and fines for "disturbing the public" and other offences.

Zayya Lwin and seven other detained activists were released from arrest on Sunday.

On Monday, he attended a poem-reading gathering at a park in downtown Yangon. After the event, Zayya Lwin said officers told him they would charge him under section 19 of Myanmar's peaceful assembly law - an offence that could see him sentenced to additional three months in jail.

"They stopped me while I was giving a talk. They came later, and told me they will charge me under section 19, but didn't give a reason why," said Zayya Lwin.

"They asked me to come along to the police station, but I refused and told them to send me an official letter laying out the charges," Zayya Lwin told Reuters by phone.

Myanmar police spokesmen Colonel Myo Thu Soe and Colonel Thet Naing were not immediately available for comment. Kyauktada police station personnel declined to comment, saying they were not allowed to speak to reporters.

A growing anti-war youth movement, which in recent months has spread to various parts of the country, has exposed frustration with Myanmar's defacto leader Aung San Suu Kyi's struggle to fulfill a promise to end decades of war by autonomy-seeking ethnic minority guerrillas in lawless border lands.

More than 6,000 people have fled their homes since an army offensive against the Kachin Independence Army (KIA), and ethnic rebel group. Rescue workers say hundreds are still trapped in danger zones.

Athan, a free speech monitoring group, said that so far in May, 42 activists across the country have been charged for participating in rallies protesting the war in Kachin and other areas.

Assistance Association for Political Prisoners, a group formed by opposition activists during the junta era to monitor the well-being of political prisoners, called on the government to drop the charges against the protesters.

"This is a clear and calculated attack on freedom of expression and right to assembly," said the organisation in a tweet.

Zayya Lwin was imprisoned for more than nine months in 2015 for protesting against the military's participation in the parliament - the army retains 25 percent of the seats under the junta-drafted constitution.