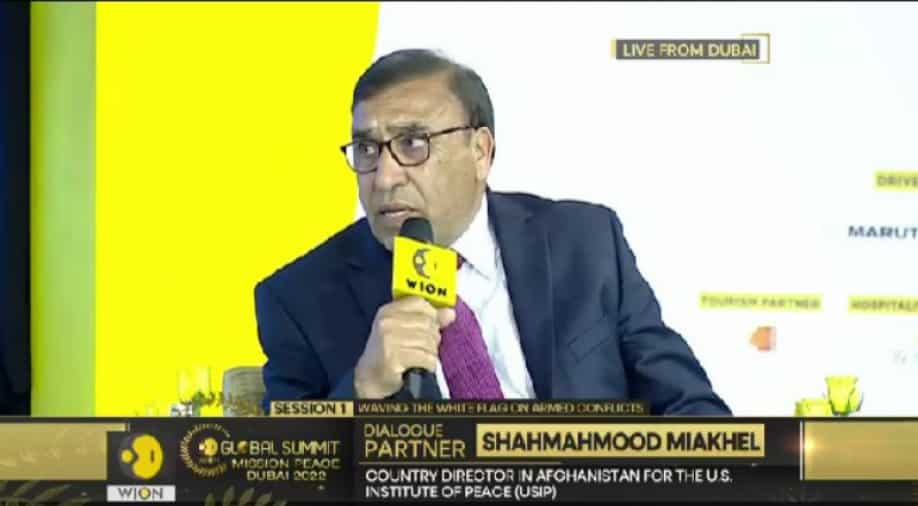 Highlighting the humanitarian crisis in Afghanistan, Miakhel said that the country has seen all types of war

Shahmahmood Miakhel, the former deputy minister of interior of Afghanistan, said during WION Global Summit in Dubai that the money spent on war should be spent on the peace process instead.

Speaking in the first session of the summit titled 'Waving the White Flag on Armed Conflict', Miakhel said: ''We don't focus on peacebuilding, we are only limited to peacemaking.''

Highlighting the humanitarian crisis in Afghanistan, Miakhel said that the country has seen all types of war.

"Once the war has happened, you violate all kinds of laws, human rights, and the average people, women, and children, will suffer," he said.

"You cannot wash blood with blood"@S_MIAKHEL, Afghanistan's former deputy minister of interior, highlights why it's important to invest in peace and prevent wars

Shedding light on why it's important to invest in peace and prevent wars, he added that "You cannot wash blood with blood."

According to Miakhel, the former governor of Nangarhar in Afghanistan, ''We have seen the Soviet occupation in Afghanistan, the intervention of the US, but the actual problem was not tackled there...They cured the symptoms, but not the real problem."

Miakhel's statements come as the Taliban, who swept back to power as the Afghan government collapsed last year, on Saturday ordered women to cover their faces in public, in another step towards their past hardline rule.

The consequences of disobedience are aimed at a woman's closest male family member, ranging from a warning to imprisonment.

The UN Security Council will meet on Thursday to discuss the order and the United States said it would increase pressure on the Taliban administration.