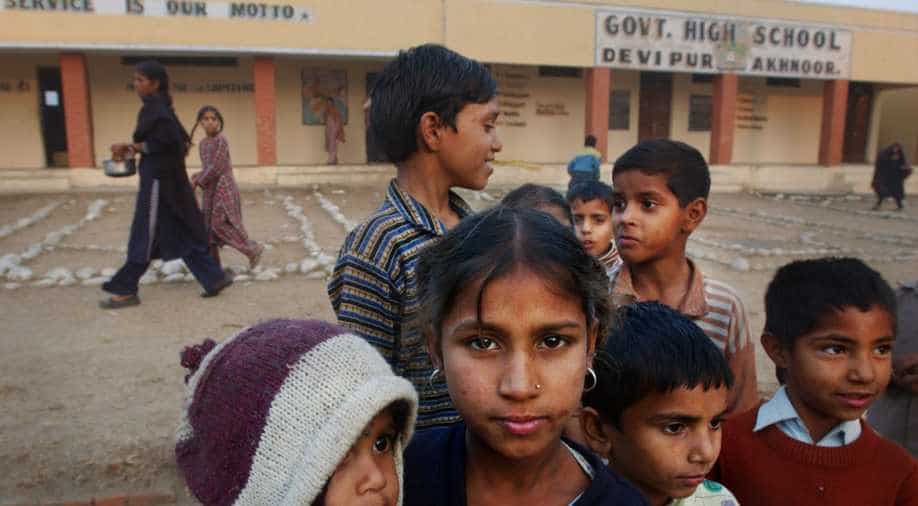 Representative image: Children assemble in front of a school converted into a refugee shelter January 11, 2002 in Akhnoor, 20 miles southwest of Jammu, the capital of Kashmir. Photograph:( Getty )

On 29 August, Meena Devi, former principal of a primary school in Dharmasati Gandaman, in the northern Indian State of Bihar, was sentenced to 17 years of imprisonment for the death of 23 children who died after consuming mid-day meal in 2013. She was found guilty under the charge of culpable homicide and criminal negligence for serving a meal of rice and soybeans laced with pesticides by the local court. A total of 47 children had fallen ill after consuming the meal, of which 23 died.  A mass graveyard was created outside the school as a reminder of the tragedy.

The first mid-day meal in India was implemented in the southern state of Tamil Nadu and is credited with encouraging children to study, thereby improving the literacy rates in the country. It not only improved the literacy rates, but also the nutritional levels.

But owing to a number of instances where children have fallen sick after consuming mid-day meal, the responsibility to ensure that the food is edible and nutritious falls on the principal, who tastes the food before it is served to children.

Nobody doubts the well-intentioned scheme was started by the government in 1995 first to improve the nutritional levels of children studying in classes I to VIII in a government school and the second to encourage children belonging to disadvantaged backgrounds to attend classes regularly. Moreover, currently, it is being consumed by 100 million children served in 1.15 million government schools, according to government data. But, at least 4,000 kids have fallen sick in the last two years if you collate the media reports of food poisoning due to mid-day meal.

“The quality is just fine, we mention in the register that food is of average quality,” said Amar Singh, principal-in-charge of Junior High School, Harola. He has kept the sample of the watery Soybean curry and rice in tiffin for us to inspect.

Harola, situated some 30 kilometres from the capital Delhi, is one of the schools which does not have provisions of kitchen-cum-stores. It is hidden behind a flock of traders and vendors and is guarded by a huge black gate.

Two tall steel food containers are kept in the corridor covered with a quilt. Because of the unavailability of a kitchen-cum-store provision, once the food is delivered, it is either kept in one of the classrooms or in the principal’s cabin.

Mid-day meals are either cooked at the schools or they are outsourced to Non-Governmental Organisations (NGOs). The Harola School gets ready-to-eat meals cooked by an NGO Dalit Prahari.

The school is a perfect right angle, with classes lined along the lines of the angles. “Children don’t have much choice, they get Khichdi (a preparation made of rice and lentils) thrice a week but they have added a fruit and a glass of milk to the weekly menu,’’ Singh added.

The school has a total of 478 children studying from class VI to VIII. Sitting behind a desk, he shows us the mid-day meal register which contains the details of how many children ate the meal, what was served to students and the signature of the principal.

Teachers Prerna Tomar and Vikhlesh are on mid-day meal duty this month. On being asked about the additional responsibility of serving meals, Tomar said: “Managing mid-day neals is nothing compared to other miscellaneous jobs that the government asks us to do.”

But Anoop, a standard VI student, told us, “Very few students eat the meals and it is served by class VII students.”

We didn’t face many difficulties when we visited the Harola School, but schools in the capital were reluctant to talk to us.
Located in the plush locality of Lodhi Road, the NP Co-ed Secondary gets its mid-day deal from Akshay Patra NGO. Arun Bhanot, the Vice Principal proudly shows us the Mid-Day Meal register and tells us that food is only served when the helpers wear gloves, surprise visits are undertaken by the authorities regularly, and parents are invited daily to taste the meal served in school.

“There have been instances when we sent back food because we were doubtful of its quality, in such times we buy biscuits for children.”

She asked us to visit the next day to see how the food is served, later in the day she called us and asked us to take permission from the Directorate of Education before visiting them.

It is a difficult task to make the school authorities talk to us about the government scheme. We are met with suspicious stares and asked to come with a written permission from the block officer.

We visited a secondary school in Khichripur area. The school resembled a jail with barbed wires and tall walls and a gate which nobody opened even after repeated knocks. We are allowed to enter after much apprehension. But, no sooner had we entered than the Vice Principal asked us to leave, serving of the mid-day meal was in progress and the two containers with food were kept under a Neem tree in the school playground.

Lana Whittaker, a PhD student at the University of Cambridge, researching India’s mid-day meal scheme in an e-mail exchange said that though mid-day meal can make a significant contribution to the recommended daily intake of calories and protein, and in terms of food groups, cereals and pulses but food is not necessarily implemented as per the guidelines plus the government doesn’t seem to be doing enough to check the quality of food.

We visited two more schools, another one in Khichripur and the second one in Anand Vihar. The Principals were reluctant to answer our questions and asked us to get the required permits.

Is it a missed opportunity?

While the eggs are being replaced by bananas in mid-day meal menu in the southern Indian state of Andhra Pradesh, Global Hunger Index released a report stating that 15.2% of people in India are undernourished.

Whittaker said, “Given the severity of child malnutrition in India, the removal of eggs or the failure to include eggs or an item equivalent in nutritional value is worrying.”

Saying that the scheme is not a charity and that children are entitled to the meal, Whittaker added, “It is the responsibility of a range of actors, including all levels of government, teachers, cooks and NGOs to ensure their duties are fulfilled and the children receive their entitlements. Amongst other things, this includes ensuring schools and NGOs follow the menu, there is adequate infrastructure in schools, money and grain arrives in schools on time, the budget is sufficient to provide a full and nutritious meal and teachers and cooks perform their duties and importantly have the capacity to do so. The idea of the capacity of those at the school level is particularly important. Effective accountability mechanisms also need to be in place to ensure that when these duties are not fulfilled, this can be identified and addressed.”

But scheme seems to be entangled in layers of red tape. On the condition of anonymity, a highly placed government official with the Ministry of Human Resource and Development agreed to talk to us. He said that the government does undertake surprise checks, but major hurdles in proper quality check are due to delay in the release of funds by the State government, delay in construction of already approved, kitchen-cum-stores and lack of management structure at State, District and Block levels.

The future of the scheme, which was introduced to kill two birds with one arrow, depends on the serious implementation of the guidelines. Until then, the next time you waste food, think about the 180 million undernourished Indians.