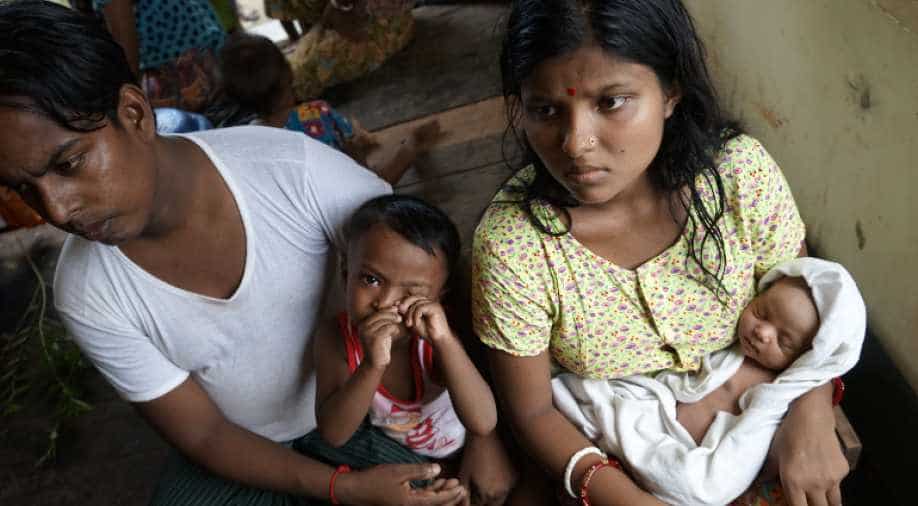 This photo taken on September 22, 2017 shows 20-year-old Hindu girl, Chaw Shaw Chaw Thee (R), who believes 23 members of her family are dead after Rohingya militants attacked their Hindu village in the Kha Maung Seik area of northern Rakhine, sitting with her newborn baby, her husband and their young son at a shelter for refugees in Sittwe. Photograph:( AFP )

The epicentre of the unrest, in northern Rakhine, is dominated by Rohingya Muslims who are a minority elsewhere and have been the target of decades of state-backed persecution and discrimination.

Myanmar's army said Sunday it had discovered a mass grave containing the bodies of 28 Hindus, including women and children, in violence-wracked Rakhine state, blaming the killings on Muslim Rohingya militants.

Thousands of Hindus have fled villages where they once lived alongside Muslims, alleging that they were targeted by militants whose August 25 raids plunged Rakhine into communal violence.

The announcement could not be independently verified in a region where access has been tightly controlled by Myanmar's army.

"Security members found and dug up 28 dead bodies of Hindus who were cruelly and violently killed by ARSA extremist Bengali terrorists in Rakhine State," a statement posted on the army chief's website said.

The Arakan Rohingya Salvation Army (ARSA) is the group whose attacks on police posts triggered an army backlash so brutal that the UN believes it amounts to ethnic cleansing of the Muslim minority.

More than 430,000 Rohingya have fled the region to Bangladesh in under a month, telling stories of Myanmar soldiers teaming up with vigilante mobs to slaughter civilians and burn entire villages to the ground.

Around 30,000 Hindus and Buddhists based in the area have also been displaced by the violence.

Both communities have told AFP they were terrorised by Rohingya militants.

The army said that security officers found a total of 20 dead women and eight men in two graves, including six boys under the age of ten.

A strong smell led security officers to the burial site outside of Ye Baw Kya village, the army said.

Unverifiable photos published by the government's Information Committee showed corpses laid out in rows on the grass near two mud pits where they were found.

Myanmar government spokesman Zaw Htay confirmed the grim discovery to AFP, as did a senior police officer in Rakhine who requested anonymity.

The village where the bodies were found, Ye Baw Kya, lies near a cluster of Hindu and Muslim communities in northern Rakhine called Kha Maung Seik.

Last week Hindus from the area told AFP that militants swept into their villages on August 25 with sticks and knives, attacking people who stood in their way, killing many and taking others into the forest.

Hindu women are believed to have been abducted by the militants.

The grim discovery of the graves will further fuel already white-hot hatred between ethnic groups in Myanmar.

The epicentre of the unrest, in northern Rakhine, is dominated by Rohingya Muslims who are a minority elsewhere and have been the target of decades of state-backed persecution and discrimination.

Around half of their estimated 1.1 million population has fled over the last year.

Northern Rakhine is also home to ethnic Rakhine Buddhists, Hindus and a myriad of other groups.

Religious tensions have simmered for years, erupting into sporadic bouts of violence.

But the scale of the latest unrest is the worst to hit the region in years.

While the wretched lines of Rohingya streaming into Bangladesh have shocked and alarmed the world, there is scant sympathy for the Muslim group inside Myanmar.

Many in the Buddhist majority view the group as illegal immigrants from Bangladesh, despite their long-established roots in the country.