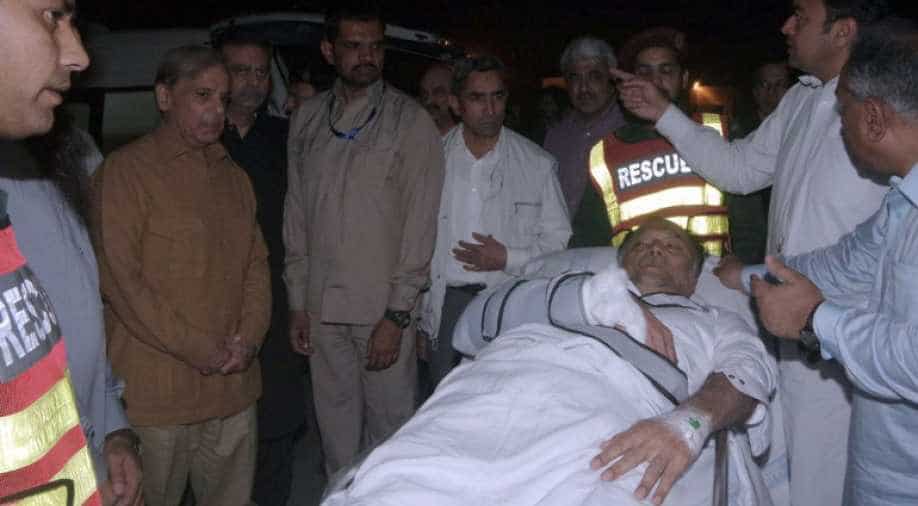 Officers and rescue workers move Pakistan's Interior Minister Ahsan Iqbal on a stretcher, after he was shot during a rally in Narowal and transported for medical attention to Lahore, Pakistan May 6, 2018. Photograph:( Reuters )

The gunman accused of shooting and wounding Pakistan's interior minister is a youth leader of a hardline religious group that sees its mission as enforcing death for blasphemers and ridding government of secular influence, police said in a report.

Interior Minister Ahsan Iqbal was shot on Sunday as he was leaving a constituency meeting surrounded by supporters in Punjab province.

He is in hospital and out of danger but the attack has shaken the political establishment ahead of a general election expected in July.

The suspected gunman, arrested at the scene, is Abid Hussain, 21, a youth leader of the Islamist Tehreek-e-Labaik party, police said in an interrogation report seen by Reuters on Tuesday.

The party, known as Labaik, has made the emotive issue of blasphemy its rallying cry in a country where for years hardline Islamists have vied for power with civilian politicians and a coup-prone military.

Hussain told police he was inspired by the teachings of founders of the Labaik and joined a party blockade of the capital, Islamabad, in November aimed at forcing out a government minister they accused of blasphemy over a change to an oath-taking law.

According to police, Hussain said he had dreamt Ali Hajveri, an 11th century Muslim preacher revered in South Asia, "ordered me to kill Ahsan Iqbal".

Labaik denied that Hussain was a member of the party.

"We have nothing to do with him," spokesman Ejaz Ashrafi told Reuters.

But a founding member of Labaik, Pir Afzal Qadri, said Iqbal and his Pakistan Muslim League-Nawaz (PML-N) party had invited trouble by committing blasphemy when they changed an election law in a way some said weakened an oath declaring Mohammad the last true prophet.

"They have done so much wrong," Qadri said in a video message. "It is their fault, they themselves are responsible for this. These people are inviting attacks."

'Send them to Hell'

Iqbal's shooting has stoked fears of a repeat of the pre-election Islamist violence that has blighted polls before, including the 2007 assassination of former prime minister Benazir Bhutto.

It has also compounded unease about blasphemy.

Even accusations of blasphemy can lead to mob killings and those convicted of blasphemy face the death penalty, though no death sentences for it have been carried out.

Many clerics say even to suggest change to the blasphemy law is blasphemy.

In November, Labaik blocked a main road into the capital for several days over the small change to the election law. The government explained the change as a clerical error and reversed it. The minister responsible resigned.

Hussain joined the protests determined to "send any blasphemer to hell", police said in their report.

Seven people were killed and 200 wounded when police tried to clear the blockade.

Qadri said Iqbal, as interior minister, was responsible for the attack on him as he had ordered the police action.

"It is regrettable that the whole world is making hue and cry just because he got one bullet, and not a single arrest has so far been made in the martyrdom of the seven people," Qadri said.

Police said Hussain had cited the example of Mumtaz Qadri, a bodyguard of the governor of Punjab who gunned down the man he was meant to protect in 2011 over the governor's call for reform of the blasphemy law.

Qadri, who was convicted of murder, sentenced to death and executed in 2016, has become a martyr for hardliners, and Labaik emerged out of a movement that lionised him.

Hussain bought a pistol several months ago and later got hold of bullets, police said in the report.

Two days before the shooting, he got a WhatsApp message from a resident of the town where Iqbal was shot, telling him the minister was due.

"When Ahsan Iqbal came down from the stage and was encircled with party workers, Abid stood up and fired."