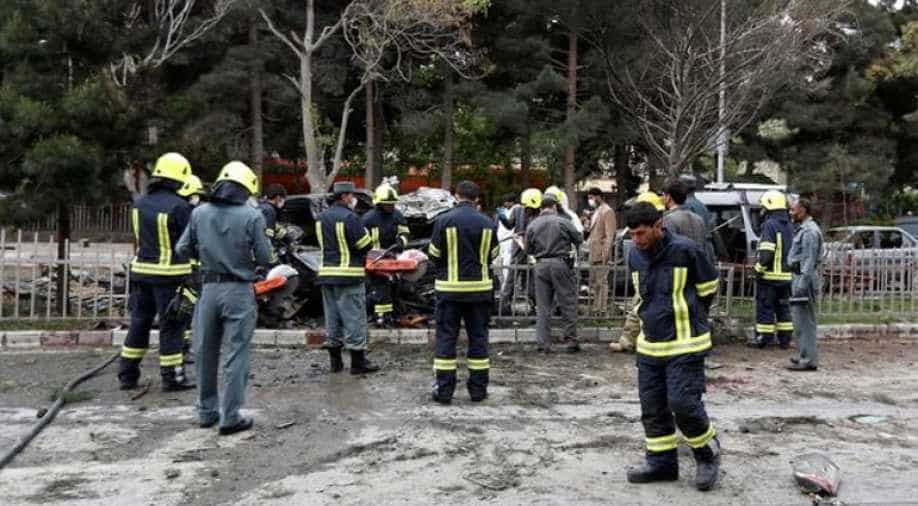 The attack follows a threat by the Taliban to target foreign forces in the spring offensive that it launched last week. Photograph:( Reuters )

Islamic State claimed responsibility on Wednesday for an attack on an armoured convoy used by NATO that killed eight people in the Afghan capital Kabul.

It said in a statement on its Amaq news agency that a suicide bomber detonated an explosives-rigged car as the convoy passed an area near the U.S. embassy, killing eight American soldiers.

Public health officials in Kabul said the eight dead were civilians and that at least 28 people were wounded in the blast that took place during the morning rush hour in a busy part of the city. Three U.S. service members were among the wounded.

There was no immediate word on whether any foreign troops had been hurt in the attack, which hit a group of armoured personnel carriers designed to withstand large blasts.

However the blast, which security officials at the scene said was a suicide attack, also destroyed or badly damaged a number of civilian vehicles nearby.

Afghan police and municipal workers clear debris from the site of a suicide bomb attack in Kabul. (Reuters)

Men carry an injured man inside a hospital after the suicide attack in Kabul. (Reuters)

The attack follows a threat by the Taliban to target foreign forces in the spring offensive that it launched last week.

Witnesses said traces of blood and clothing could be seen on the ground at the blast site. Kabul television stations earlier reported that at least three people had been killed.

The heavily armoured MRAP (Mine Resistant Ambush Protected) vehicles that coalition forces use to travel in Kabul appeared to have suffered only relatively minor external damage, witnesses said.

There was no immediate comment from the Resolute Support mission in the capital.