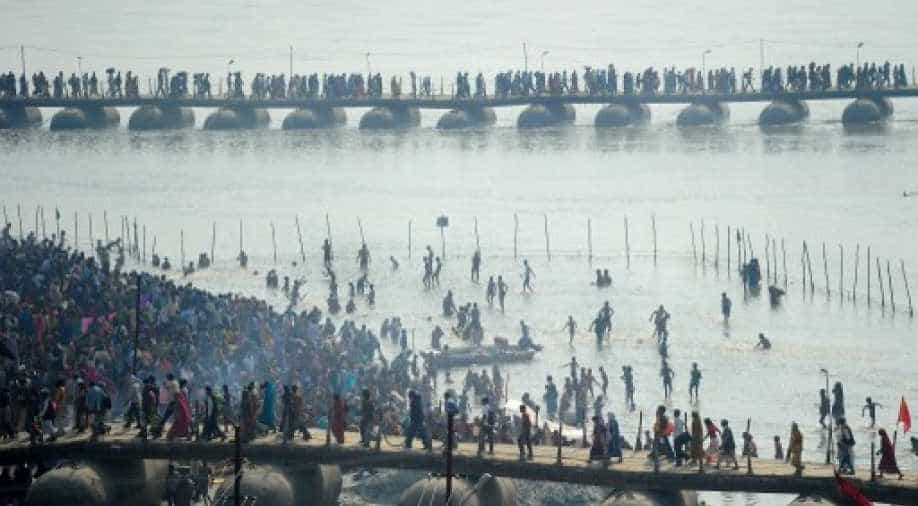 The Bhagirathi eco-sensitive area was notified in 2012 to protect the 100 km Gaumukh to Uttar Kashi stretch of Bhagirathi, spread across 4,179 square kilometres. Photograph:( AFP )

Dated October 13, the letter, which has been accessed by DNA, has Shekhar pointedly questioning his MoEF counterpart on why had his ministry permitted 10 hydro projects and mining to come up in the Bhagirathi valley. These projects, he said, would dilute the Bhagirathi Eco Sensitive Zone, located in the upper reaches of the Ganga.

The Bhagirathi eco-sensitive area was notified in 2012 to protect the 100 km Gaumukh to Uttar Kashi stretch of Bhagirathi, spread across 4,179 square km.

In his letter, Shekhar said, "Permitting large scale activities like hydro power projects, construction works, mining etc. will severely compromise the environmental concerns and its sensitivity and will have far reaching environmental consequences in the days to come."

It is not the first time the Ministry of Water Resources has taken up this issue. Sources say that that following Shekhar's letter, Water and Ganga Minister Uma Bharti, too, spoke to her counterpart Anil Dave and expressed her concern about plans to allow dams in the eco-sensitive area. These sources added that despite repeated reminders to the MoEF but so far nothing has been resolved.

Speaking to DNA, Shekhar said, "You cannot shove in anything through the back door, this is a fundamental mistake and it is illegal. They need to realise that this is the last pristine and free-flowing stretch of the Ganga."

In the minutes of the meeting, it was stated that the "MoEF & CC could consider inserting a transitional clause to permit the 10 HEP's (hydropower projects) which were approved prior to the date of notification." Along with plans to permit hydro power projects, the MoEF said that river-bed mining up to 2m depth could be allowed in the eco-sensitive area.

The MoEF is defending its decisions on grounds that the projects will be approved only after a carrying capacity study is done by scientists. "The Uttarakhand government presented the Zonal Master Plan, but it has defects and requires a lot of changes. We will look into all aspects before approving hydropower projects in the eco-sensitive area," said Amita Prasad, additional secretary, MoEF.

Meanwhile, the water ministry has panned the Zonal Master Plan. "It is (Zonal Master Plan) is fundamentally wrong because it is not prepared by experts. We have prepared a draft joint affidavit to be submitted in the NGT that has been sent to the environment ministry. We should have experts visit the ESZ," said Shekhar.

Currently, the NGT is hearing an ongoing matter on the issue pertaining to Zonal Master Plan of the Bhagirathi eco-sensitive zone.