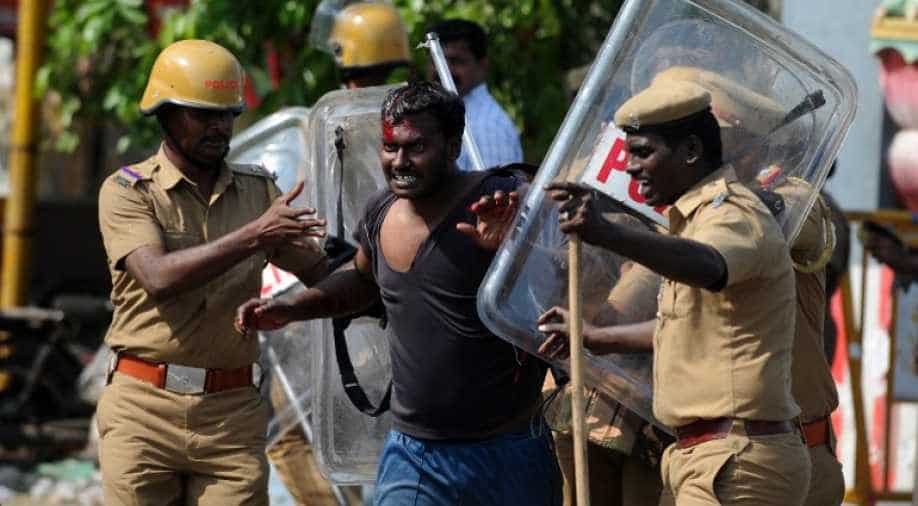 Tamil Nadu chief minister O Panneerselvam tabled the Jallikattu Bill in the assembly today evening. The bill was passed unanimously within minutes in the assembly.

WION correspondent Nishta Gautam reports the youngsters in Alanganallur, the main area of Jallikattu, have voluntarily withdrawn protests after the successful talks, even as several other protestors continued the sloganeering oblivious to the development.

Media persons were caught in the crossfire at several locations, including Marina beach, where the WION crew was attacked and equipment damaged. Many protestors stayed put despite police action and accused the government of unnecessarily using force against a peaceful agitation. As the day ended, Madurai seemed to be limping back to normalcy. Protests were largely quelled and the police opened up all the blocked roads leading to Alanganallur.

After two weeks of protests, Alanganallur will finally celebrate Jallikattu. It is being said that as a tribute to all those who took part in the protests, a special gallery will be arranged to accommodate them during the event. The Vaadi Vasan(where the bull is supposed to enter) in Alanganallur wore a deserted look as opposed to the hectic activity it witnessed over the last two weeks.

Meanwhile, replacing an ordinance promulgated two days ago to allow Jallikattu, the bill to amend the Prevention of Cruelty to Animals Act, 1960 was unanimously adopted by the Tamil Nadu assembly after members of all parties welcomed the legislative initiative.

The "Prevention of Cruelty to Animals (Tamil Nadu Amendment), Act, 2017" was piloted by chief minister O Panneerselvam and adopted by a voice vote. It was deemed to have come into effect on the day the ordinance was issued on January 21, 2017. The government had promulgated the ordinance in a bid to defuse the raging protests across the state, especially at the Marina beach, by students and others, demanding lifting of the ban on Jallikattu.

The bill defines Jallikattu as an event involving bulls conducted with a view to following tradition and culture from January to May and it includes similar events like 'manjuviratu', 'vadamadu' and 'erudhuvidum' festivals.

It noted that India's highest court, the Supreme Court, had held Jallikattu as violative of the PCA Act (sections 3, 11, and 22). The bill further said, considering the vital role of Jallikattu in preserving and promoting tradition and culture among people and also in view of ensuring the survival and continuance of native breeds of bulls, the "Government of Tamil Nadu has decided to exempt Jallikattu from the provisions of the PCA Act".

Leader of Opposition in the Tamil Nadu assembly M K Stalin was among those who welcomed the bill.

Earlier in the day, the week-long protests against the Jallikattu ban turned violent with a police station near Marina beach being set on fire. Several vehicles were also set on fire.

Meanwhile, actor Kamal Haasan said he spoke to Prime Minister Narendra Modi and chief minister O Panneerselvam on the issue and appealed to the protesters to maintain peace.

"Have informed our honourable PM through the best of my connections. The honourable justice seekers (who are protesting for Jallikattu) will have to maintain peace," he said in a series of tweets. The 62-year-old actor also sought to know why police took action when the students were waiting to see what decision the Tamil Nadu assembly takes on the matter.

My request to the police minister.Stop harrassing peacful protesters of TN and Marina.Let the CM offer solutions arrived upon @ the assembly

The main protest in Tamil Nadu against the Jallikattu ban has been held on Chennai's Marina beach, with reports saying there have been as many as 15,000 protesters on the beach at one time. The protests had so far been peaceful, with women and children taking part.

But police began evicting the protesters early on Monday, saying they needed to secure the beachline before Republic Day. Reports said police had managed to evict as many as 5,000 protesters, but the most hard core of them said they would not go until the "permanent solution" (against the ban) they have been asking for is found.

Reports also added that the remaining protesters were reinforced by others coming in from nearby areas. As the balance began to tip and with police trying to gain control, they began to lathi-charge (watch accompanying video) the protesters.

Police said they had had stones pelted at them. WION reporter Ramesh Ramachandran said he could see ambulances whizzing past him every few minutes. He added that the crowd now seemed to be made up predominantly of men. Jallikattu is a sport in which groups of men face off against a bull in an open field. The men try to grab and cling on to the (indigenous Tamil) bull's distinctive hump. The sport's orgins probably lie in farming communities trying to find their best bulls, or the best herders for them. Pitting man versus animal would have been the easiest way to do that.

The sport is immensely popular in the state but it was banned by the Supreme Court in 2014, on the ground that it was cruel to the bulls.

Several commentators though have said that the protests against the ban are not just that, but also an assertion of Tamil pride. That the protesters -- the protests have so far been run by apolitical leaders -- are saying Jallikattu is a part of Tamil culture, and that it should remain so.

On Saturday, the Tamil Nadu government promulgated an order allowing the sport to be held in the state for six months.

But that has not been enough to satisfy the protesters on Marina beach and elsewhere in the state -- 100 students were detained in Coimbatore on Monday after they clashed with police; another protester was injured in Madurai after clashes with police -- they continue to ask for a permanent solution.

The government has said that the ordinance is a permanent solution, that a bill will be introduced in the assembly and will be passed into law.

That bill, the government has said, will be introduced in the assembly on Monday itself.  The Tamil Nadu assembly will hold a special assembly session at 5 pm today to introduce (and pass) the bill.

Meanwhile, the police action on protesters was raised in the Madras high court but the court refused to hear the matter saying it would not interfere in administrative affairs.