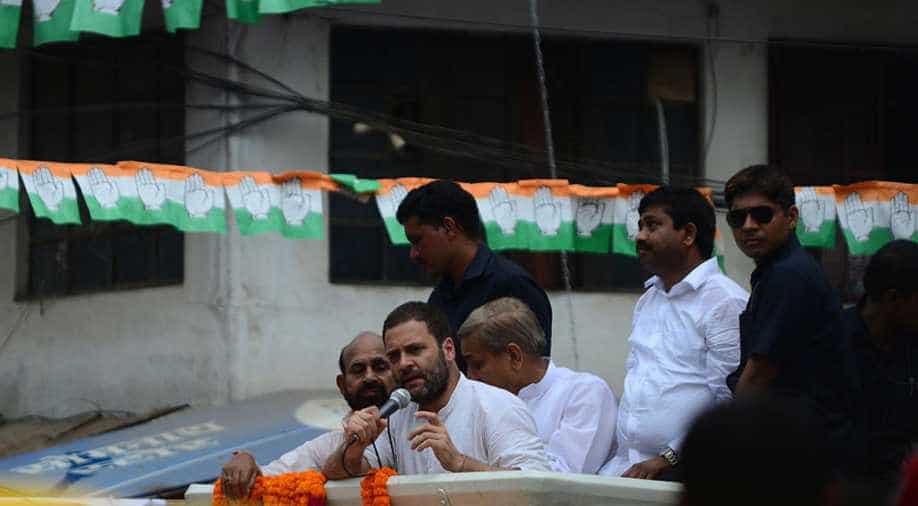 Rahul Gandhi was detained for trying to enter hospital despite being advised otherwise. Photograph:( AFP )

Delhi Police on Monday briefly detained Congress party vice-president Rahul Gandhi and deputy chief minister Manish Sisodia after they tried to enter a government hospital in the Indian capital to meet the family of the ex-serviceman who had committed suicide earlier in the day, dissatisfied over the implementation of one rank one pension scheme for the Indian Army.  Hours later, Delhi chief minister Arvind Kejriwal was also detained after he protested outside another hospital where the soldier's body had been taken for post-mortem.

The family of the deceased soldier, Ram Kishan Grewal, was also reportedly detained for continuing to protest at New Delhi's Ram Manohar Lohia hospital even after the body was taken to the Lady Hardinge hospital for the post-mortem.

Rahul argued with the police about the reason for the arrest of the family members.

#WATCH: Inside visuals of the Mandir Marg Police station (Delhi), where Congress VP Rahul Gandhi has been detained. pic.twitter.com/Tr0F34XMTn

This is 'goondagardi' (hooliganism), Delhi chief minister Arvind Kejriwal said about his deputy being detained, adding that he was determined to meet Grewal's family. "I am the chief minister of Delhi. An ex-serviceman has committed suicide. Is it not my duty to meet the grieving family?" Kejriwal said.

Deputy CM has also been detained, we have a cabinet meeting today which we will have to cancel now. This is 'gundagardi': Delhi CM Kejriwal pic.twitter.com/QpftaqnHrA

Democracy doesn't mean creating obstruction. Leaders must also understand that hosp is not the place to hold any demonstrations: MK Meena pic.twitter.com/yLKvutCRG9

He retailated with a caustic tweet: "A new India is being built”.

Rahul Gandhi had earlier condoled his death on Twitter and urged PM Modi that “OROP be implemented in a meaningful way.”

On Saturday, the Congress vice-president had written to PM Modi, asking his government to ensure that the grievances of defence personnel relating to their salary and pensions were addressed. He had specifically mentioned the OROP scheme and the disability pension in his letter.

In a suicide note, Grewal, 70, said he was taking the extreme step for the soldiers.

Police said that he along with some other ex-servicemen was in the process of submitting a memorandum to the Indian defence ministry over the issue of OROP.

Grewal's son told ANI that his father took the extreme step because the government had failed to fulfil the demands related to OROP.

Ex-servicemen have been protesting over the OROP scheme introduced by the government.