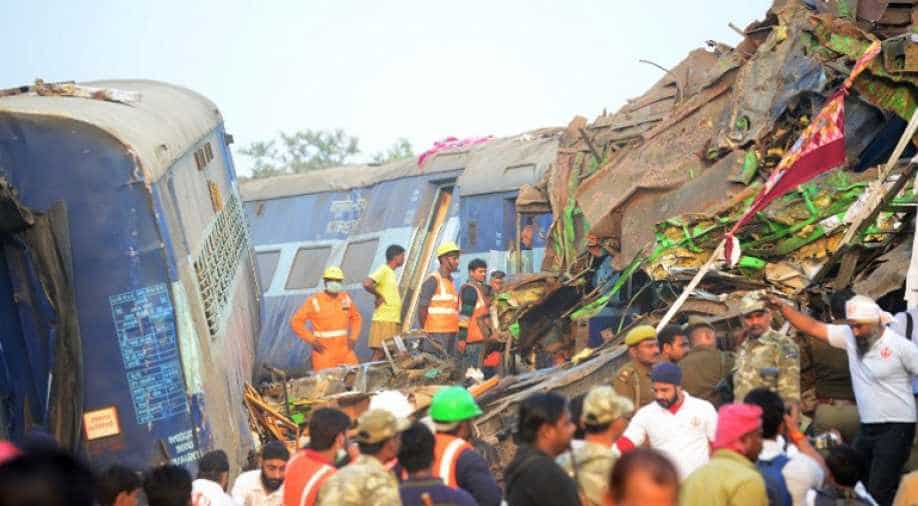 At least 120 passengers were killed and more than 200 injured after 14 coaches of the Indore-Patna express train derailed at about 3 am Sunday in Pukhraya -- about 60 kilometres from the industrial city of Kanpur -- in the northern Indian state of Uttar Pradesh. The injured have been shifted to nearby hospitals in Kanpur.

The Patna-bound train jumped the tracks early morning, when nearly 500 passengers were sleeping, badly damaging four sleeper coaches. Two of these coaches, S1 and S2,  telescoped into each other and most of the casualties were feared to have been in these two compartments, PTI reported. TV footage showed mangled blue carriages, with crowds of people and police on top of the wreckage searching for survivors.

The S3 and S4 coaches also suffered severe damage. An AC III tier coach was also affected but casualties in it were not heavy. Minister of State for Railways Manoj Sinha told the press that the cause of the accident appeared to be rail fracture.

The army, which deployed an armoured recovery vehicle to clear the wreckage, said it will carry out rescue operation through the night. 90 rescue personnel and a 50-member medical team, which included five doctors, were deployed in the rescue efforts.

Kanpur Station Commander of the army Brig B M Sharma told WION, "We have plans to work through the night. Our lights are up. Though the railway cranes are working, we have got our armoured recovery vehicle here to speed up the operation. The challenge now is to get to the other side."

"We will try and retrieve every individual," he added.

Railway personnel, the army, National Disaster Response Force and state police carried out the search and rescue operations through the day.

Nearby villagers were setting up temporary kitchens and erecting tents for survivors and officials, Reuters reported. Heavy metal has been used to rescue those trapped.

India's Railways Minister Suresh Prabhu said the government would investigate the causes of the derailment and promised accountability with the "strictest possible action".

Later in the day, Prabhu said that broken track may have caused the tragedy.

Survivors also told of their desperate search for loved-ones on the train, which was carrying at least one wedding party with the marriage season in India in full swing.

Bride-to-be Ruby Gupta, who survived the accident with a fractured arm, was desperately searching for her father. "I have been looking everywhere for him," she told PTI.

Another survivor, Rajdeep Tanwar told Reuters, "I can see bodies lying near the tracks, everyone is in a state of shock. There is no water or food for us."

Indian Prime Minister Narendra Modi wrote on Twitter that he is "anguished beyond words" and that he has spoken to Prabhu, "who is personally monitoring the situation closely".

Anguished beyond words on the loss of lives due to the derailing of the Patna-Indore express. My thoughts are with the bereaved families.

Prayers with those injured in the tragic train accident. I've spoken to @sureshpprabhu, who is personally monitoring the situation closely.

Prabhu tweeted helpline numbers put out by the Railways.