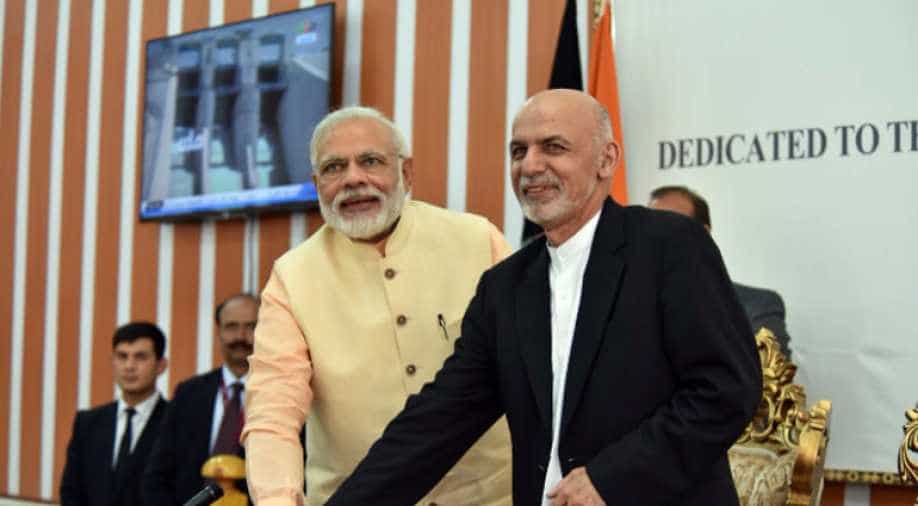 While Afghanistan is allowed to send a limited amount of goods overland through Pakistan into India, but imports from India are not allowed via Pakistan's port of Karachi. Photograph:( Others )

India and Afghanistan are likely to announce an air cargo service on Saturday to help increase trade that both say is stymied because of their tense political relations with Pakistan that lies between them.

Afghan President Ashraf Ghani and Indian Prime Minister Narendra Modi will meeting in Amritsar, a short distance from the Pakistan border, for the Heart of Asia conference aimed at stabilising Afghanistan.

Officials say the focus of the air cargo service is to improve landlocked Afghanistan's connectivity to key markets abroad and boost the growth prospects of its fruit and carpet industries while it battles a deadly Taliban insurgency.

Afghanistan depends on the Pakistani port of Karachi for its foreign trade. It is allowed to send a limited amount of goods overland through Pakistan into India, but imports from India are not allowed along this route.

Afghan director general for macro fiscal policies Khalid Payenda said the potential for trade with India, the largest market in the region, was far greater than allowed by land and so the two countries had decided to use the air route.

"That would be air cargo between Afghanistan and India. We have a lot of potential for trade on both sides. On our side, it's mostly fruit and dried fruit and potentially through India to other places for products like carpets and others."

He said that a joint venture involving an Afghan and an Indian cargo firm would be set up and that the two governments were working to set up infrastructure at Kabul and Delhi airports.

An Indian government source attending the meeting in Amritsar said air cargo route details were still being worked out and could include Kandahar as a point of origin for shipping fruit directly to India.

"There have been very many ideas on how to enhance connectivity, overcome current challenges and also expand the trade basket," he said.

Ties with India have deteriorated further in recent months after a series of attacks on Indian military bases in the disputed region of Kashmir, which New Delhi says have either been carried out by militants sneaking in from Pakistan or orchestrated by groups based there.

Pakistan denies stoking violence in Kashmir and says India must open talks on the future of the revolt-torn Muslim majority region.

Indian officials said no talks with Pakistan were scheduled on the sidelines of the Amritsar conference.

Afghanistan's ties with Pakistan have also become strained after a series of violent attacks, several of them in the capital Kabul, that it said showed Pakistan had failed to rein in the militant groups operating from its soil.

"Unless we take a collective measure to fight terrorism, to fight the breeding ground for terrorism, the safe sanctuary, we will not be able to bring peace and stability either to Afghanistan or to anywhere else in the region, including India," said Afghan ambassador to India Shaida M Abdali.

Pakistan says it is itself a victim of terrorism and says India is using its close ties with Afghanistan to stir trouble in its restive Baluchistan province.