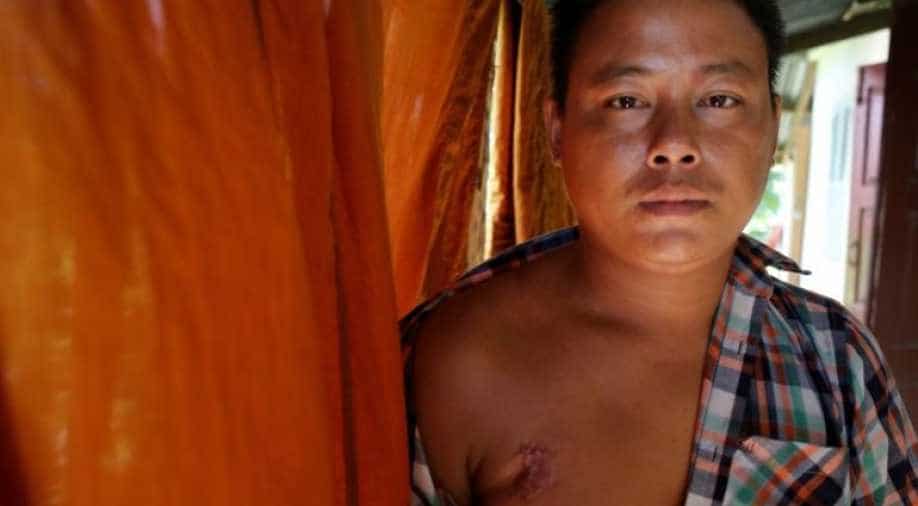 Despite rich oil reserves and a strategic location on the Bay of Bengal, the state is one of Myanmar's poorest.

When 35-year-old Ah Hla showed up to a police station in western Myanmar in late April hoping to see her husband among the prisoners, she didn't know whether he was alive or dead.

Several dozen men, including her fisherman husband, had been detained weeks earlier when the military raided their village in central Rakhine state's Mrauk-U township and accused them of belonging to a rebel army, residents told Reuters.

"I went there with the hope that I am going to see my husband, but he was not there," said Ah Hla, who had walked to the police station with a group of relatives of the detained men. When she arrived, police told her that her husband of 15 years had hanged himself in his cell and that his body had already been disposed of.

"I passed out on the floor of the police station," she said, cradling her six-month-old son and choking back tears.

An army spokesman told Reuters that three of the detainees had died in custody, saying one, a 24-year-old man, had a heart attack, while another died from drug withdrawal and a third, 40-year-old Thein Tun Sein - Ah Hla's husband - killed himself.

In Rakhine state, where security forces expelled more than 700,000 ethnic Rohingya Muslims in a 2017 campaign the United Nations says was carried out with "genocidal intent", Myanmar's military is waging a new war.

This time, the target is the Arakan Army, an armed group that recruits from among state's mostly Buddhist ethnic Rakhines and has been fighting for greater autonomy for the region that was an independent kingdom for centuries.

In its calls for an armed "revolution", the Arakan Army draws on deep-seated historical resentment felt by some Rakhines towards the ethnic Bamar majority that dominates the central government and their sense that Myanmar's faltering transition to democracy has not brought the western state greater prosperity or self-determination.

The authorities imposed an unprecedented internet shutdown across the region in late June, citing the need to avert unrest. Yanghee Lee, the UN expert on human rights in Myanmar, said last week that both sides may be committing "war crimes" under the cover of the blackout, citing reports of deaths during army interrogations.

During a rare trip by Reuters to the conflict zone, much of which is off-limits to journalists and humanitarian agencies, 10 residents gave accounts of soldiers firing weapons indiscriminately, killing and wounding civilians, and torturing detainees.

Reuters was unable to independently verify the accounts, which were similar - though on a smaller scale - to those of Rohingya refugees who fled the violence in 2017.

According to three lawmakers in the region and Amnesty International, the military has deployed as many as five Light Infantry Divisions - shock troops famed for brutal counter-insurgency campaigns against the nation's myriad ethnic armed groups.

In 2017, two LIDs were accused of leading a scorched earth campaign against the Rohingya, burning hundreds of villages to the ground and raping and killing women and children. The military denies ethnic cleansing and genocide.

"What's astonishing is that some of the same military units responsible for atrocities against the Rohingya are now committing new abuses in Rakhine," said Laura Haigh, Amnesty's Myanmar researcher.

Contacted by phone, Zaw Min Tun, a military spokesman, said such abuse of detainees "might happen or might not happen", adding that allegations would be investigated.

"I am not denying there is abuse or torture during the period of arrest, because this kind of thing might be happening on the ground level, whatever we order," he said.

"If that kind of thing happens, we can go through the legal process. We always take action against our military men who unjustly torture people."

TORTURED IN MANY WAYS

Three hours by boat from the state capital of Sittwe up the languid Kaladan river, Mrauk-U was for more than 300 years the capital of an independent Rakhine kingdom, until it was annexed by the Burmese in 1784.

Despite rich oil reserves and a strategic location on the Bay of Bengal, the state is one of Myanmar's poorest.

Before the recent fighting, the town was popular with tourists who came to see the ancient temples that dot the landscape.

Now, displaced villagers camp in tents in the shadows of the monuments and, in the town, families sleep in bunkers loaded with sandbags to escape shelling and gunfire.

In Lekkar, the village where Ah Hla lived with her husband, half a dozen residents said troops from the 22nd and 55th LIDs fired indiscriminately into the village, driving inhabitants into a monastery where they were detained, separated by gender, questioned, and forced to squat for hours under the hot sun. Reuters was unable to contact local officials to seek comment.

Soldiers then took 27 men and held them for several weeks in an interrogation center where, according to three of the detainees and six family members of the arrested men, they were kept in darkness, deprived of food and water, and subjected to beatings and electrocution. One man told his wife a fellow detainee was forced to stand on his tip-toes with a noose tied around his neck.

Ah Hla said police officers gave her a photo, seen by Reuters, showing her husband's bone-thin dead body, so she could explain to her children what had happened to him.

"I don't know even know what they did with his body or if they did a funeral for him," she said.

Outside a courtroom in Sittwe last week, the detained men taken in the same raid said they were innocent and urged journalists to "tell the truth" about what had happened to them. They have been charged with breaking the Terrorism Act, punishable with up to 10 years in prison, and are on remand awaiting trial.

"They tortured us in many ways," one of the men shouted. "We were beaten in so many ways."

Khin Shwe Than, the mother of one of the detainees, a 16-year-old boy, said he told her he was kept in a dark cell, deprived of food and water and beaten.

BEHIND A LOCKED DOOR

The central government led by Nobel laureate Aung San Suu Kyi has little support in an area where her National League for Democracy party lost to the Arakan National Party in the 2015 election that brought her to power.

Suu Kyi called for the armed forces to "crush" the rebels during a meeting with the military chief in January, her spokesman said.

On June 21, the Ministry of Transport and Telecommunications directed all telecoms companies to "temporarily" disable internet services in nine townships across Rakhine and neighbouring Chin state, citing "disturbances of the peace and use of internet activities to coordinate illegal activities".

Human Rights Watch says as many as 1 million people have been affected.

Myo Swe, a spokesman for the Ministry of Communications and Information Technology, told Reuters the shutdown was in the "public interest" and connectivity would be restored when "rule of law and security" could be ensured.

Khine Thu Ka, a spokesman for the Arakan Army, said the military had sent in reinforcements in recent days overland and by boat. "We can say fighting and clashes are happening frequently since the internet shutdown," he said.

The group has been accused of abuses including the abduction of dozens of civilians. Khine Thu Ka said it had eight people in its custody but was planning to release them.

Since internet access was cut off, activists say news about the escalating conflict has been slower to trickle out.

The UN says more than 35,000 people have been forced to flee their homes since January because of the fighting.

Aung Than Tun, who runs a volunteer ambulance service in the town, said he has driven dozens of wounded people to the hospital after clashes in villages since the conflict began in January, most with mortar and gunshot injuries.

Some residents said they were resorting to travelling hours by road to the state capital, risking landmines and gunfire, to get access to the internet.

Oo Twan Hla, a lawyer, said he took the road regularly to check court dates and communicate with a growing number of clients – including many arrested over alleged ties to the Arakan Army.

"It's like we are in the dark, behind a locked door," he said.