In geopolitical struggle over Myanmar, China has an edge 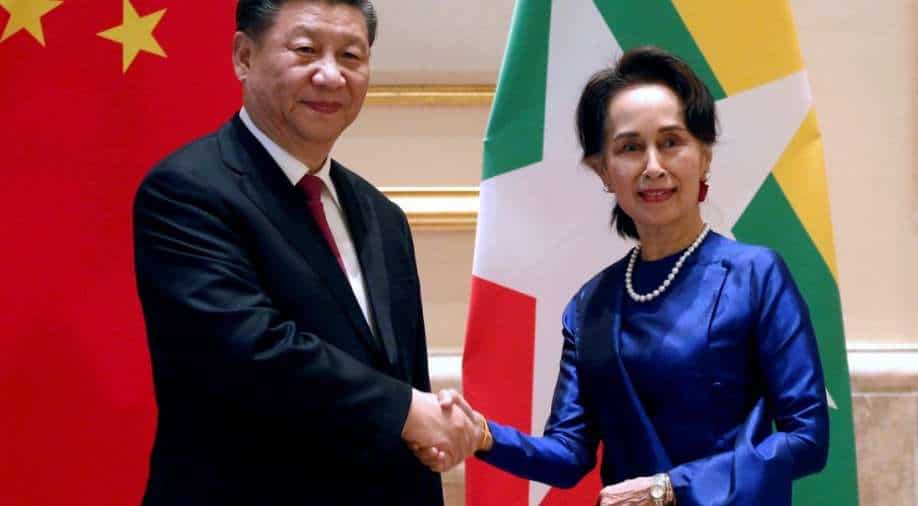 During a meeting with Senior Gen. Min Aung Hlaing, the army chief now in charge, the Chinese official expressed support for the military’s “deserved role in the course of national transformation and development.”

Less than three weeks before Myanmar’s military overthrew its elected government, China’s foreign minister, Wang Yi, made a hastily scheduled visit to the country and heaped praise on its generals.

During a meeting with Senior Gen. Min Aung Hlaing, the army chief now in charge, the Chinese official expressed support for the military’s “deserved role in the course of national transformation and development.”

The coup d’état this week has thrust China back into the uncomfortable position it held for years with Myanmar: as the principal defender of a military dictatorship facing an international firestorm of criticism.

The coup has complicated a geopolitical struggle over a country that had only recently emerged from diplomatic isolation. China has sought to make it a pliant neighbor, while the United States has searched for the right mixture of pressure and encouragement to nurture a transition to democratic rule. It is also unclear how much any outside influence, from east or west, will sway the generals, whose bunkered mentality cut Myanmar off from the world for half a century.

The United States and others have called on the generals to reverse course, respect the result of fall’s elections and release the leaders they have detained, including Aung San Suu Kyi. “We will work with our partners to support restoration of democracy and the rule of law, and impose consequences on those responsible,” President Joe Biden vowed Thursday.

The United States, however, is not the dominant moral arbiter in world affairs that it once saw itself to be, and other forces in Myanmar could test Biden’s ability to forge coalitions to tackle foreign policy challenges, as he has promised to do.

While China remains Myanmar’s largest trading partner, its biggest foreign investor last year was Singapore. Japan, South Korea and Thailand have also poured money into the country, making it much less isolated than it was during the decades of military rule.

Japan joined the United States and other Group of 7 nations in condemning the coup, but it appears unlikely to support new sanctions against Myanmar’s military rulers, which the Biden administration is considering.

“It’s not just China and the West,” said Richard Horsey, a political analyst based in Yangon, Myanmar’s commercial capital. “There’s another world out there, and that makes it much more complicated to figure out how to move forward.”

China, for now, has more leverage to shape events than the United States and other nations do.

The Chinese, along with the Russians, have so far blocked significant action on Myanmar by the United Nations Security Council, and Wednesday they complained about leaks detailing the deliberations there. A day later, the Security Council issued a statement that expressed “deep concern at the declaration of the state of emergency” in Myanmar and called for the release of those arrested.

In their public statements, the Chinese have gone to extraordinary rhetorical lengths to avoid even a hint of criticism, with the state news agency, Xinhua, referring to the coup as a “major cabinet reshuffle.” China’s refusal to denounce the generals could shore up their grip on power by deflecting some of the global condemnation.

“They consider it their sphere of influence, no doubt about it,” said Derek Mitchell, a former U.S. ambassador to Myanmar who is now president of the National Democratic Institute, an organization that promotes democracy. “They’re very wary of American influence in the country.”

The Chinese government, he added, sees the coup as “a moment of opportunity” to undercut the inroads the United States and other Asian nations made during Myanmar’s halting democratic opening.

The coup poses challenges of its own for China. The country’s leader, Xi Jinping, had cultivated closer political ties with Suu Kyi and her party, the National League for Democracy. As Myanmar’s civilian leader, Suu Kyi visited China more than any other foreign country.

Xi went to Myanmar in January of last year — his last foreign trip before the coronavirus pandemic froze most travel — and signed a flurry of agreements, including railroad and port projects that are part of China’s “Belt and Road” program to expand its economic corridors to the Indian Ocean.

The fates of such projects are now shrouded in uncertainty, and the Chinese loathe uncertainty, said Bilahari Kausikan, a former Singapore diplomat who is the chairman of the Middle East Institute at the National University of Singapore.

“They spent considerable energy, time cultivating Aung San Suu Kyi — with some success,” he said. “Now they have to start again with a new bunch of generals, and these generals are not just difficult for the West. They’re difficult for everyone.”

Although China defended Myanmar’s junta for decades, the relationship has been far from cordial.

Many of the generals spent their formative years battling communist rebels, who received generous, if covert, funding from Beijing. While ethnic insurgents are no longer part of the socialist brotherhood of that era, they still receive weapons and tactical support from China, according to senior members of ethnic armed groups.

When Xi visited Myanmar last year, the military complained to him about China’s financing of those rebel armies. The military justified its first coup, amid ethnic insurrections in 1962, as necessary to hold the country together, and ethnic strife in Myanmar’s borderlands has flared in recent months.

As Western sanctions hurt Myanmar’s economy in the 1990s, the military began to plan economic liberalizations that would free it from dependence on China’s largess, and it has defied its powerful neighbor in recent years.

In 2011, Thein Sein, a former junta member who headed a transitional government, suspended construction of a Chinese-backed dam that would have flooded a holy site while sending almost all the electricity it generated to China. The project remains suspended.

By contrast, Suu Kyi defended a Chinese-invested copper mine project that had been tainted by human rights abuses.

“If the military would make China the economic partner China wants to be, it would have done that before 2011,” said Yun Sun, director of the China Program at the Stimson Center in Washington. “But under international isolation, the junta always felt China was exploiting them because they had no other options. That’s why they chose reform over China.”

When those reforms began, the United States saw an opportunity to show that democracy could flourish even in authoritarian soil. That led to high-profile diplomacy, including visits by Secretary of State Hillary Clinton in 2011 and by President Barack Obama in 2012 and 2014.

Myanmar, meanwhile, has changed significantly. China is no longer the only economic alternative to the West for the generals, as it was during the years of diplomatic isolation. Myanmar’s reforms led to economic — and, increasingly, political — links with other countries in Asia, especially Japan.

“They have a very good relationship with all sides in Burma,” Mitchell, using Myanmar’s former name, said of the Japanese.

A Japanese special envoy has been mediating between the military and an ethnic armed group in the western state of Rakhine, raising hopes that Tokyo’s delicate approach with the generals might get more results than sharp criticism from the West. Japan could also bring its economic influence to bear. Kirin, the Japanese beer maker, announced Friday that it would end its joint ventures with two companies in Myanmar over the coup.

China, for its part, has called for calm and stability in recent days, emphasizing that other countries should not interfere in Myanmar’s internal affairs.

It is not clear if Wang, the foreign minister, picked up any signals that a coup was in the works when he visited Jan. 11 and 12.

As Xi had a year earlier, he met with both military and political leaders, reflecting the fragile balance of power before the generals retook full control.

During their meeting with Wang, held in a large, gilded room, Hlaing and other commanders complained about the elections in November that expanded the civilian government’s power, citing “mistakes and inaccuracies that could have led to electoral fraud,” according to a statement by the military.

Despite the economic agreements it reached with Suu Kyi, China has not signaled support for her. It appears to be calculating that there is little chance the coup will be reversed.

“China’s relationship with Myanmar is not dependent on who is in power,” said Sun of the Stimson Center. “Whoever in power will always need to work with China. The difference is with the quality of the partnership and the costs that China has to carry for it.”