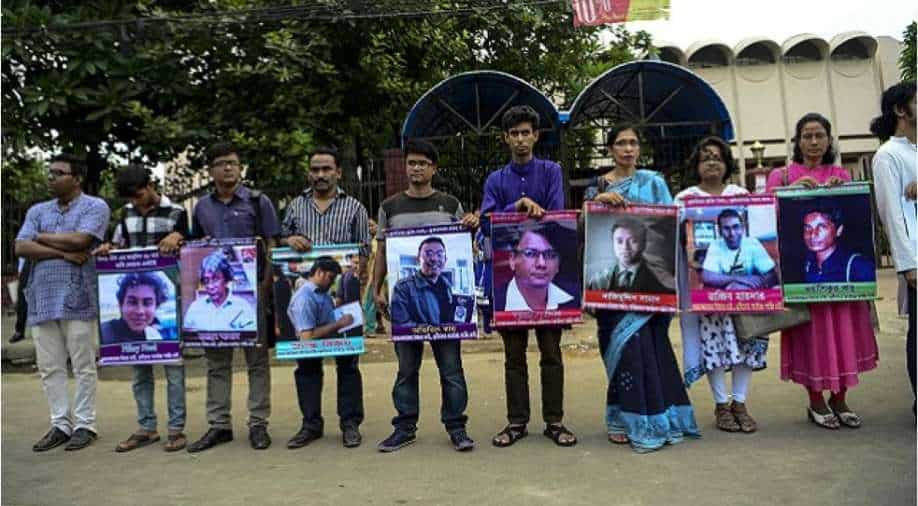 Bangladeshi activists hold the photos of activists, writers and bloggers who were murdered by unidentified assassins, in Dhaka on June 15, 2016. Photograph:( AFP )

A tribunal in Bangladesh has sentenced five members of banned terrorist outfit Ansarullah Bangla Team (ABT) to death and another person to life term imprisonment in a case filed over the murder of writer and founder of Mukto Mona blog Avijit Roy.

Avijit Roy, a US citizen of Bangladeshi origin, was hacked to death by machete-wielding assailants in February 2015 while returning home with his wife from a Dhaka book fair. His wife and fellow blogger Rafida Ahmed suffered head injuries and lost a finger.

"Charges against them were proved beyond any doubt. The court gave them the highest punishment," public prosecutor Golam Sarwar Khan said after the verdict, amid tight security at the Special Anti-Terrorism Tribunal in the capital, Dhaka.

The court also jailed one man for life in the attack, Khan said.

He said the six men convicted on Tuesday belong to the al Qaeda-inspired domestic militant group Ansar Ullah Bangla Team, which police say was behind the murders of more than a dozen secular activists and bloggers.

Syed Ziaul Haq, a sacked army major believed to be the leader of the group and who masterminded the killing, and one other member of the group were tried in absentia and received death sentences, Khan said.

Nazrul Islam, the defence lawyer for the six men, said they would appeal against the sentences in the higher court.

The most serious attack came in July 2016, when gunmen stormed a cafe in the diplomatic quarter of Dhaka and killed 22 people, most of them foreigners.

After the cafe siege, more than 100 suspected militants were killed and hundreds more were arrested as the government cracked down on Islamist groups to preserve its image as a moderate Muslim nation.