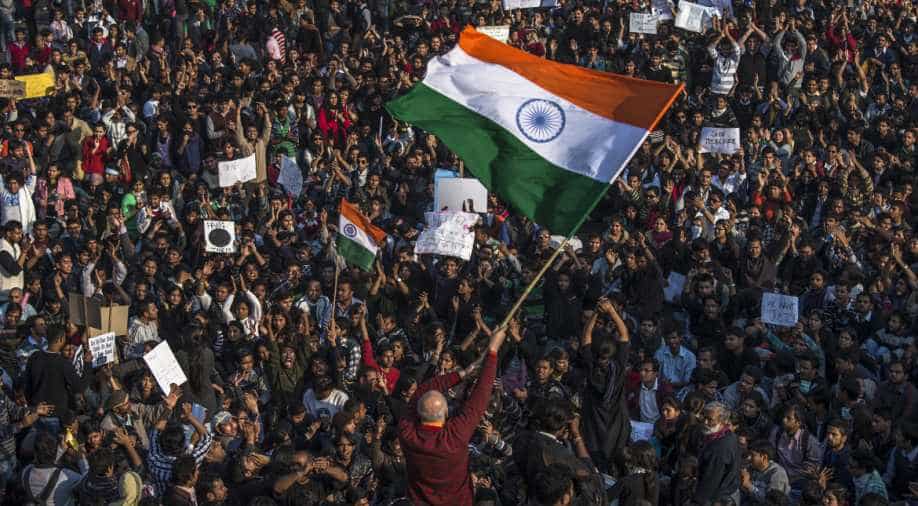 Representative picture: Students form a line in front of a cordon of Police during a protest against the Indian governments reaction to recent rape incidents in India in front of Rashtrapati Bhavan or the Presidential Palace on December 22, 2012 in N Photograph:( Getty )

The state-wide 12-hour strike called by the Left Parties to protest the demonetisation of Rs 1000 and Rs 500 notes began in West Bengal today, with normal life visibly unaffected in the first few hours. Government buses and other private vehicles were seen plying on the road.

"So far there has been no major incident, except a few small ones in the districts," a senior police official said. The strike call by the Left Front has been opposed by the ruling TMC in West Bengal. "We oppose bandhs. We will take out a protest march (against demonetisation) on Monday," state Chief Minister Mamata Banerjee had said.

The TMC said it was against putting people to more hardship when they are "already facing a lot of problems owing to the scarcity of cash". Instead, the TMC will take out a rally from College Square to Esplanade today to protest against demonetisation, TMC general secretary Subrata Bakshi had said.

The state government has ordered all its employees to attend offices today and tomorrow. Exceptions would be made only in case of bereavement, maternity leave, hospitalisation and other "genuine reasons", a circular issued by the state finance department said.

Over 3,000 police personnel have been deployed in the metropolis to tackle any untoward incident, Kolkata Police Additional Commissioner of Police (III) Supratim Sarkar had said.

The 12-hour strike called by the Communist Party of India (CPI(M))-led Left Democratic Front (LDF) government in Kerala, as part of the nationwide agitation by opposition parties against demonetisation and the resultant crisis being faced by the cooperative sector in the state, began this morning.

In the early hours of the strike which started at 6 AM, autorickshaws were seen occassionally, providing some relief to people. Police vehicles were used to transport railway passengers and patients coming from far off places to the Regional Cancer Centre.

Kerala State Road Transport Corporation (KSRTC) and private buses are keeping off roads in most places. Some Sabarimala pilgrims who arrived at Kottayam by train complained that they were unable to leave for the Ayyappa temple as buses were not running. "We have been waiting for hours. Though some private taxis are available, we cannot afford them as the fares are exorbitant," a man from Andhra Pradesh said.

German Cruise liner AIDAbella which had arrived in Kochi made a turnaround call at the Kochi port yesterday. At least 1000 tourists would be arriving at the airport today to embark the vessel, while some would be leaving it to explore various places.

Tour operators were assured by Tourism Principal Secretary V Venu that the hartal would not affect the visitors. The opposition Congress-led United Democratic Front (UDF) would be taking out a march to the Raj Bhavan here at 11 AM on the crisis being faced by the cooperative sector.

Banks, newspapers, milk supply, hospitals and marriage functions would be exempted from the shutdown, LDF convener Vaikom Viswam had said in a statement.

The LDF had announced the strike as part of the nationwide protest against the Centre's move of scrapping Rs 500 and Rs 1,000 notes.