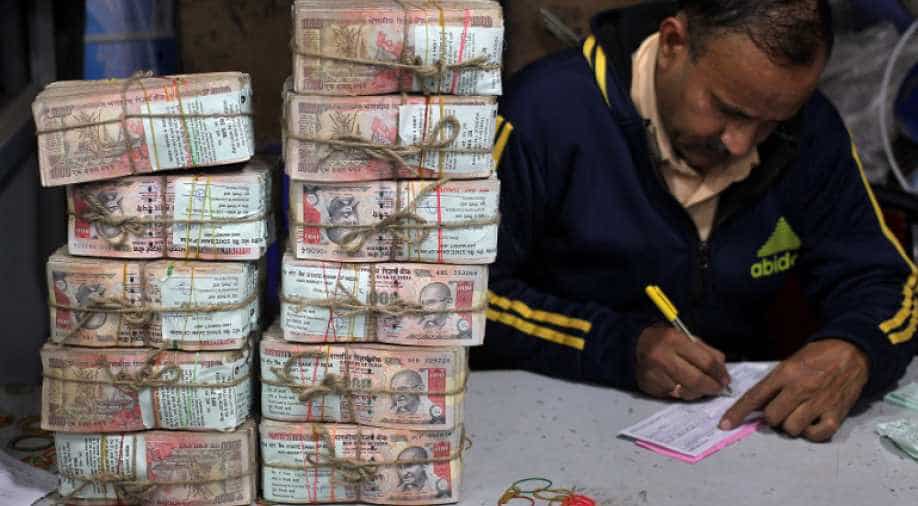 A bank employee fills a form after counting stacks of old 1000 Indian rupee banknotes inside a bank in Jammu. Photograph:( Reuters )

However, people will still be allowed to deposit the old bank notes at the Reserve Bank of India (RBI).

The ordinance on demonetised currency does not propose a jail term for those holding more than 10 junked notes after the final March 31, 2017, deadline, but imposes a minimum fine of Rs 10,000.

The draft ordinance, which will be sent to President Pranab Mukherjee for his assent, will come into force from December 31.

There was a proposal for prescribing a four-year jail term, but the draft ordinance does not contain any such provision.

Those keeping the junked notes for "study, research or numismatics" purposes would be exempt from penalty provided they hold not more than 25 number of such notes irrespective of the denomination.

Besides, people authorised by RBI or its agencies or those holding junked notes under directions of a court would also not be penalised, as per Section 5 of the draft ordinance.

It provides for making holding of old Rs 1,000 and 500 notes after March 31 a criminal offence that will attract a fine of Rs 10,000 or five times the cash held, whichever is higher.

According to Section 6 of the 'Specified Bank Notes (Cessation of Liabilities) Ordinance, 2016', whoever knowingly and wilfully makes any false declarations regarding junked notes would be liable for a fine "which may extend to Rs 50,000 or five times the amount of the face value of specified bank notes tendered, whichever is higher".

The ordinance also provides for amending the Reserve Bank of India (RBI) Act, 1934 to provide legislative support for extinguishing the central bank and government's liability on the demonetised banknotes that are not returned.

While the deadline for the deposit of old currency in bank or post office accounts expires on Friday, there is time till March 31 for depositing them at select RBI counters with stiff conditions.

Sources said a proposal for a four-year jail term for anyone possessing large number of demonetised currency after March 31, 2017 was not approved by the Cabinet.

As per the draft ordinance, citizens who were abroad between November 9 and December 30 are entitled to deposit the junked notes till March 31 with RBI.

The government would also bring out a separate notification for "such class of persons and for such reasons as may be specified" to ensure that people are not harassed and those with genuine reasons can deposit the cancelled notes.

At the time of announcing demonetisation of old Rs 500 and Rs 1,000 notes on November 8, the government had allowed holders to either exchange them or deposit in bank and post office accounts.

According to the government, the main reason for bringing out the ordinance is to "have clarity and finality to the liabilities of the Reserve Bank of India (RBI) and the central government" arising from the demonetisation of high value currency notes.

In case of companies found holding more than 10 junked notes, action would be taken against the officials concerned.

Proceedings could be initiated against "any director, manager, secretary, or other officer or employee" of the particular company.

The ordinance also provides safeguard for the government and the central bank from facing any legal proceedings.

"No suit, prosecution or other legal proceeding shall lie against government, RBI or any of their officers for anything or intended to be done in good faith under this ordinance," it noted.

Sources said the legal amendments are needed every time the government decides to scrap any legal tender to put an end to its promissory note.

Of the Rs 15.4 lakh crore worth of currency that was scrapped, about Rs 14 lakh crore has been deposited in banks or exchanged.