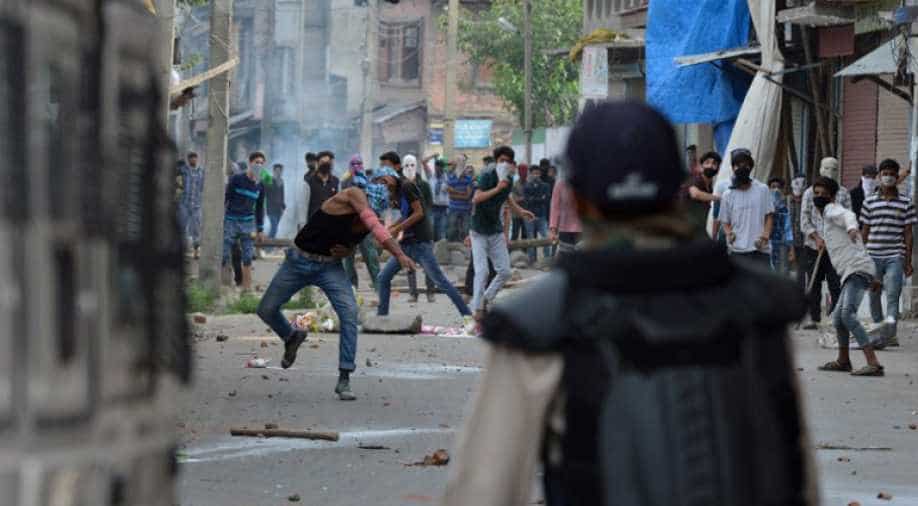 Protesters throw stones at security forces during a protest in Kashmir on August 9, 2016. They were sparked by the death of Burhan Wani on July 8. Photograph:( AFP )

His arrest from Jammu and Kashmir on July 25, 2016 cut short the plans his Lashkar-e-Taiba (LeT) handlers had to further fuel unrest in the Kashmir Valley in the aftermath of Hizbul Mujahideen commander Burhan Wani's killing by India's security forces.

Had he not been caught, Bahadur Ali— the Pakistani national against whom India's National Investigation Agency (NIA) today filed a charge sheet before a special court— would have attempted to mix with the protestors and throw grenades at the security forces during the agitation post Wani's killing in Kashmir.

After having crossed over into the Indian side from across the Line of Control along with two more terrorists, Ali— during a conversation with his handler from across the border— was told that the LeT cadres had been successful in fuelling large scale agitation in Kashmir after Eid following militant Burhan Wani's death, the NIA has told the court in its chargesheet today. Codenamed Alfa 3, the Lashkar handler then told Ali to “to mix with the protestors and throw grenades at the security forces” so as to further fuel the agitation in the Kashmir valley, the NIA has said.

NIA's main charge against Ali is that he infiltrated into India in a bid to commit acts of terrorism in various Indian cities, including its capital New Delhi. Following his arrest, Ali revealed the details of the infiltrators he was to receive as per his handler's instructions. Based on this information, a search operation was launched in Bandi Monabal area on July 26, 2016 and four unidentified terrorists were killed. A huge cache of arms, ammunition, explosives and wireless sets was recovered too.

As per the NIA, Bahadur Ali, Abu Saad and Abu Darda were provided codes in the form of nine alphabets, which were to be used to record numerals such as grid references and phone numbers.

An analysis based on the disclosure of Bahadur Ali regarding the codes has established the route taken by the trio after they crossed the LoC. “When plotted on a map, the deciphered grid references clearly trace the infiltration route from the direction of the LoC towards Handwara,” the NIA has stated. The NIA has added that investigation proves that Ali is well conversant with using map sheet and plotted the grid references correctly. Data on the GPS device recovered from Ali at the time of his arrest contained coordinates of Lashkar's Mandakuli "launching pad" in PoK.

The 50-page charge sheet traces in great detail the journey Ali and his two fellow terrorists undertook to infiltrate into India:

Recoveries made from Ali's possession at the time of his arrest:

Recoveries made following information revealed by Ali after his arrest: