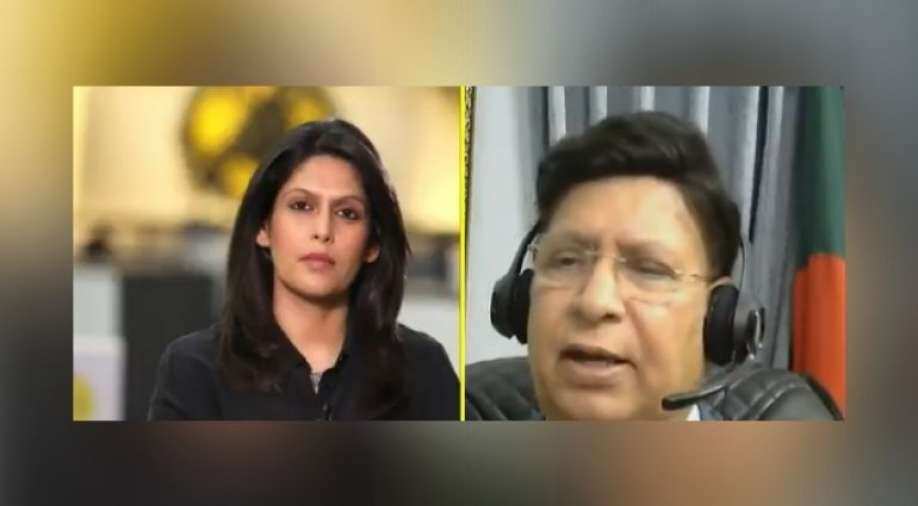 Bangladesh foreign minister in an interview to WION Photograph:( WION )

He also underscored that both countries have a 'rock-solid relationship' and there has been a strong social, cultural, and historical bond between people of both nations in an exclusive interview to WION

Bangladesh Minister of Foreign Affairs AK Abdul Momen said that Bangladesh is "very lucky" that Indian PM Narendra Modi will be a part of two of its major celebrations in an exclusive interview with WION's Executive Editor Palki Sharma.

PM Modi will be visiting Bangladesh on January 26 for the celebrations of 50 years of Bangladesh's Independence and the 100th birth anniversary of its Father of the Nation Sheikh Mujibur Rahman.

"These are two great events for Bangladesh and we are very lucky that the Indian Prime Minister will join us in this celebration," Momen said.

He also underscored that both countries have a "rock-solid relationship" and there has been a strong social, cultural and historical bond between people of both nations.

The Bangladeshi foreign minister also said that during the country's independence movement, India came forward to help them "physically, mentally" and stressed that Indian soldiers "shed blood" for their cause.

He also thanked his Indian counterpart S Jaishankar for keeping his word of visiting Bangladesh in-person once the coronavirus situation improved in India.

"We have shown the world the height of the leadership maturity as we have resolved most of the major issues through dialogue, discussions and through consensus," Momen said.

However, he said there are few issues remaining, like border killing, but added that both countries are on the same page to settle the matter and are against any loss of life.

Momen also said that the countries agreed to open a bridge between Bangladesh and India and road connectivity which will extend to Nepal and Bhutan.

He also said that India was requested to join India-Bangladesh-Myanmar-Thailand and beyond road belt to which New Delhi agreed.

On the Teesta river issue, the Bangladeshi minister said that both countries stood by the 2011 agreement, but due to some local problems, the delivery of the deal has not been done.

Even Jaishankar told me that "let's keep our fingers crossed" and I hope that the issue will be resolved, he said.

He said that there are 1.1 million Rohingya refugees in Bangladesh and their effort is to provide them with education and technical knowledge.

Recognising that Rohingyas have been "persecuted, killed" in their own land, Momen said that they are negotiating with the Myanmar government.

He described Myanmar as a "friendly nation," and said that the country agreed to take these migrants home.

But "almost four years have passed, there has been lack of insecurity and Rohingyas don't trust their govt," he said.

He said that Bangladesh suggested Myanmar allow non-military civilian observers from friendly countries like ASEAN, India, Japan and others to monitor that these migrants are safely sent back, but Myanmar did not answer their requests.

But, he hoped that the Myanmar junta can find a solution to the massive crisis.

"The generals have visited some of the Rohingyas in Rakhine camps and assured them safety and security. These are good beginnings," the Bangladeshi minister said.

He recalled Myanmar's military administration in 1978 and 1992 when the country was able to repatriate 200,000 refugees each time, stressing that it "depends on political commitment".

Momen said soon a solution to this matter should be found otherwise the Rohingyas out of "frustration" could become radicals.

"If these Rohingyas will be here for very long without any hope...then there is always a possibility of developing radicalism," he said, adding that then it will be a problem for the entire region.

"These are unsubstantiated, rumours. The reality is India is our age-old friend," he said.

He called China Bangladesh's "development partner" and added that the country has good relations with Beijing.

He also expressed hope that one day that the region one day becomes passport-free.

"I believe one day the whole of Indian sub-continent will be visa-free...just like European Union," the Bangladeshi foreign minister said.