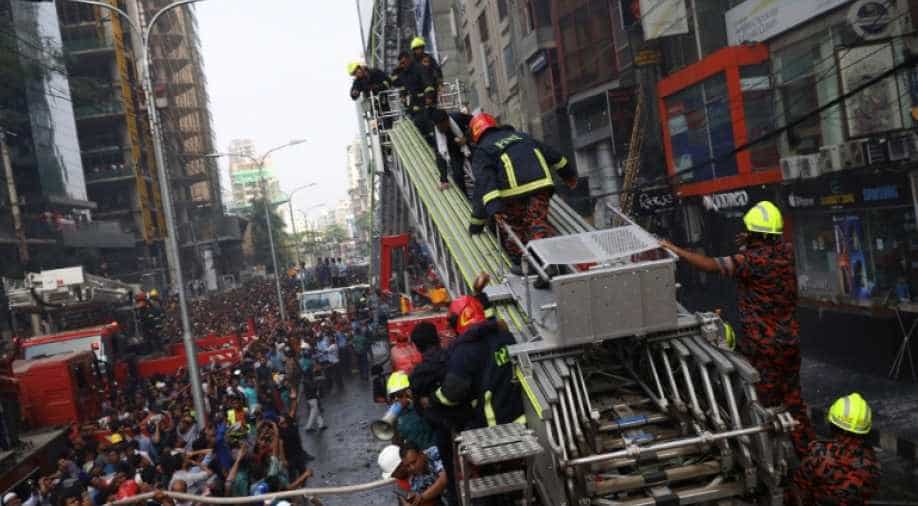 A case was registered in Benani police station on Saturday, Dhaka Police Commissioner Asaduzzaman Mia was quoted as saying by the bdnews24.Com.

A senior leader of opposition Bangladesh Nationalist Party (BNP) was among two persons arrested in connection with a devastating fire in a high-rise building that killed 26 people in Dhaka last week, police said on Sunday.

At least 26 people were killed and 50 others were injured when the blaze broke out in the 23-floor office block, F R Tower in Dhaka's Banani area, on Thursday.

A case was registered in Benani police station on Saturday, Dhaka Police Commissioner Asaduzzaman Mia was quoted as saying by the bdnews24.Com.

S M H I Faruk, an engineer and the landowner of the building, was arrested from Bashundhara residential area around 1:45 am on Sunday, Deputy Commissioner of the Detective Branch of Dhaka Metropolitan Police, Moshiur Rahman, said.

BNP leader Tasvir Ul Islam, who is one of the owners of the building and the president of the commercial complex's management committee, was arrested from his Baridhara residence on Saturday, Additional Deputy Commissioner of the Detective Branch of Dhaka Metropolitan Police, Shahjahan Saju, said.

Authorities said that the building lacked adequate fire safety measures and had no fire-protected staircases.

Islam was the owner of the top three floors of the building that had no permission for the construction, police said.

There were other partners, who jointly own the building, and police were looking for the chief of the construction company that built the complex, they said.

Islam is a member of the BNP's central committee and the president of the party's Kurigram wing. He is the younger brother of late A K M Maidul Islam, a founding member of the BNP, and the managing director and CEO of the Quasem Industries Limited.

The firm has its offices on the 21st and 22nd floors of the building.
The ownership of the building was jointly held by Faruk, and a real estate company, Rupayan, which built the tower, they said.