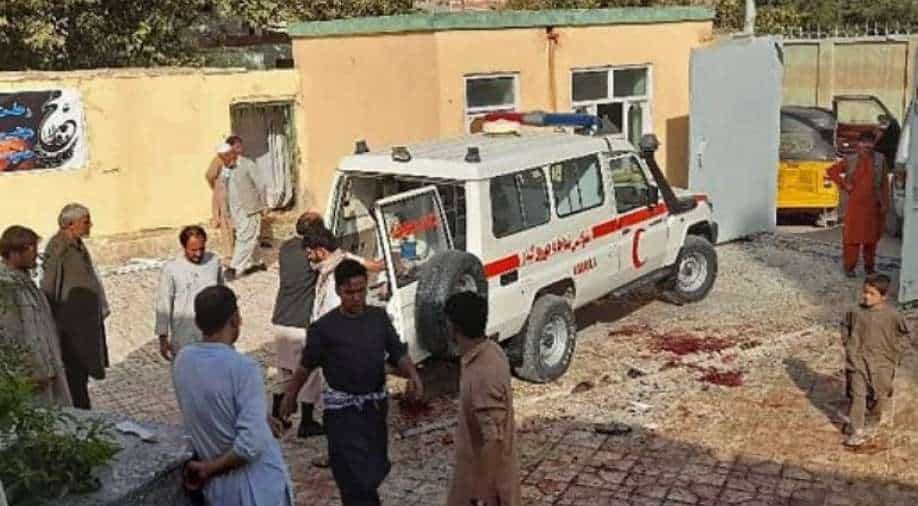 Afghan men stand next to an ambulance after a bomb attack at a mosque in Kunduz on October 8, 2021. Photograph:( AFP )

A blast targeted a mosque in Kunduz city in the northern province of Kunduz, inflicting casualties on worshippers.The explosion took place during Friday prayers.

A bomb ripped through a mosque filled with Shia Muslim worshippers in northern Afghanistan on Friday, killing or injuring at least 55 people, according to a Taliban police officer.

There was no immediate claim of responsibility for the bomb, which occurred in Kunduz, the capital of Kunduz province, but Islamic State terrorists have a long history of assaulting Afghanistan's Shia minority.

Body parts were seen surrounded by rubble inside the mosque, which is utilised by the minority Shia Muslim population.

"We have received more than 100 wounded patients and over 55 dead bodies, but the number will change. We are still receiving more people," said a Doctors Without Borders (MSF) hospital worker, who did not want to be named.

Local residents said the blast hit a Shia mosque during Friday prayers, the most important of the week.

"This afternoon, an explosion took place in a mosque of our Shia compatriots ... as a result of which a number of our compatriots were martyred and wounded," Taliban spokesman Zabihullah Mujahid said.

If verified, the death toll would be the biggest since US and NATO soldiers departed Afghanistan at the end of August, when the Taliban assumed control.

The Taliban have been targeted in a string of fatal strikes by rival IS militants, including ambushes and an explosion at a mosque in Kabul, the capital.

The explosion in Kunduz occurred during the weekly Friday prayer service at the Gozar-e-Sayed Abad Mosque.

The Friday midday prayer is the climax of the Muslim holy week, and mosques are usually packed.

Ali Reza, a witness, claimed he was praying at the time of the explosion and saw numerous victims.

Shia Muslims, who are frequently targeted by Sunni extremists, have been subjected to some of Afghanistan's most brutal attacks, with rallies destroyed, hospitals assaulted, and commuters ambushed.

Many of them are Hazara, an ethnic minority that has been oppressed for decades in Afghanistan.