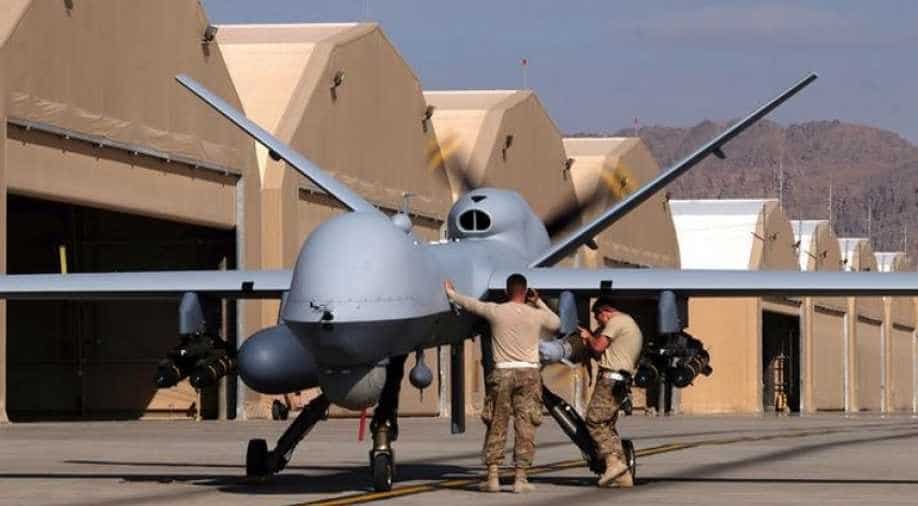 US airmen prepare a US Air Force MQ-9 Reaper drone as it leaves on a mission at Kandahar Air Field. Photograph:( Reuters )

They are speaking about the same deadly drone war that the United States has been waging this year, but talk to the US military and Afghan civilians and their conclusions about who is targeted are often starkly different.

To the Americans, only enemy combatants were killed by missiles fired from unmanned aircraft in Afghanistan in 2016.

Eyewitness accounts, however, along with United Nations reports, suggest dozens of civilians were among the casualties.

"People seem to think we just shoot missiles at random," Lieutenant Shaw, a drone operator in his 20s told Reuters at the US Air Force's base in Kandahar, southern Afghanistan. "But if anything, we are better equipped than many manned aircraft to make sure we have the right guy."

The certainty expressed by drone operators often contrasts with the chaos described by witnesses on the ground.

"There were dead bodies and body parts everywhere," said resident Hameed Shinwari, describing the scene soon after an attack in his village in eastern Nangarhar province, where as many as 15 civilians were killed in a drone strike in September, according to a UN report and local people who say they witnessed it.

Civilian casualties in coalition air strikes have been highly sensitive throughout the 15-year-long US-led war in Afghanistan, and avoiding them is crucial to winning local support for the government in its fight against the Taliban.

The issue has gained new urgency as the United States has relied more on unmanned aircraft since most international troops were withdrawn at the end of 2014.

In the Nangarhar strike, a 12-year-old boy was among those who told Reuters they had been wounded. US officials said the only confirmed casualties were Islamic State fighters.

The incident starkly highlights the divide between the US military, which says not a single civilian was killed in such operations in 2016, and critics, including human rights groups and some former drone pilots, who say overly broad targeting policies are putting too many civilians in the crossfire.

Speaking in rare interviews at their bases in Kandahar and nearly 8,000 miles away in the deserts of Nevada, US drone crews defended their methods for hunting down Islamic State, Taliban, al Qaeda and other militants.

Among the types of missions described by drone pilots in Afghanistan are "signature strikes", when the identity of the targets is not known but they are tagged as combatants based on their behaviour and other intelligence.

The range of video and electronic sensors on unmanned aircraft can help make sense of the messy modern battlefields where insurgents often blend into local populations, they say.

"We know who they are," said Lieutenant Colonel Michael Navicky, head of the US Air Force's drone programme in Afghanistan, in an interview at his headquarters at Kandahar.

If pilots notice civilians nearby after a missile has been fired they can still call off the strike by guiding it into an unpopulated area, he said, a manoeuvre called a "shift cold".

While acknowledging that drones can be better than manned aircraft at picking targets, many human rights activists argue that US policies can leave too much room for interpretation.

"The question is not whether they (the US military) know names, but are they lawful targets?" said Letta Tayler, a senior counterterrorism researcher for Human Rights Watch.

With fewer US troops on the ground, there was a "grave risk" that strikes could be misdirected or manipulated by sources on the ground to settle local scores, she said.

"As the fight in Afghanistan morphs into something new, there are many questions that the US needs to answer."

The UN reported in October that at least 32 civilians had been killed through September in drone strikes in Afghanistan, contributing to an overall increase in civilian casualties from US and Afghan air strikes compared with last year.

When asked about the sharply different accounts of the outcome of strikes, US military spokesman Brigadier General Charles Cleveland said in a statement that US troops "employ detailed systems of technical, tactical and procedural checks and balances before employing all weapons in Afghanistan".

"Strict rules apply to the use of air-delivered munitions, particularly when civilians may be present or whenever there is a possibility of striking a civilian structure," Cleveland said.

Another UN report, released in July, said a pair of strikes in Paktika province on April 6 killed at least 17 civilians.

"When we arrived there, a pick-up truck had been attacked and was in flames," Ainullah, a resident who said he went to the scene after the strike, told Reuters. He described the casualties as "shopkeepers who were bringing food to their children".

As in other strikes this year, the US military contested the status of those killed. A spokesman told Reuters that they found "no evidence" that any non-combatants were killed.

Drone operators, who spoke to Reuters on the condition they were only identified by their rank and first name, insisted strikes were only conducted after extensive surveillance.

The approval process for strikes was "significant", and went "very, very high in the chain of command", said Captain Eric, a drone pilot.

As many as 85 per cent to 90 per cent of requested strikes were rejected, he added, because of concerns over civilian casualties or a lack of information about the target.

"We're human, and we feel what is happening when we have to launch a strike," drone pilot Major Adam said. "That motivates us to make sure we get it right, because the last thing we want is for the worst to happen."