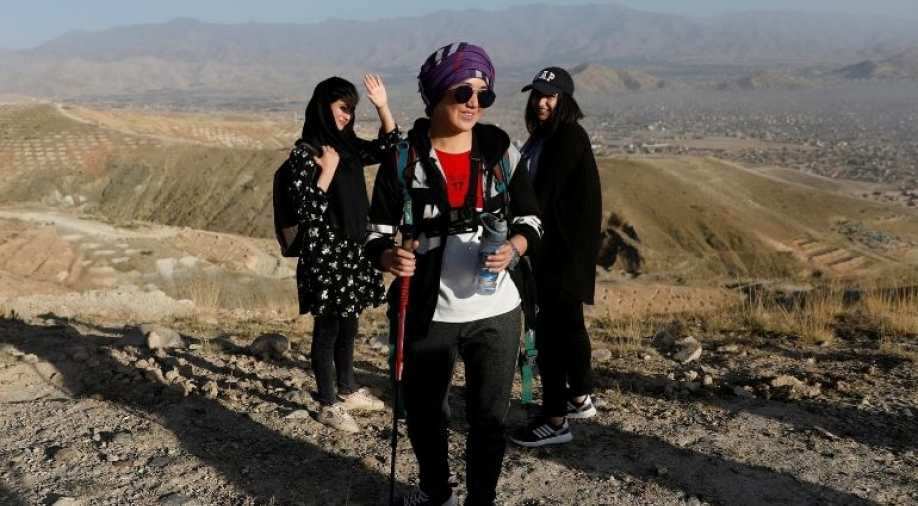 Fatima Sultani, 18 (C) a member of Hikeventures mountaineering team stands with her teammates during an excercise on mountain on outskirts of Kabul, Afghanistan September 4, 2020 Photograph:( Reuters )

Fatima Sultani along with her companions had climbed the summit of Noshakh in the Hindu Kush mountains, which is the highest peak in Afghanistan at 7,492 metres

Eighteen-year old Fatima Sultani gazes at the peak of a mountain near Afghanistan's capital Kabul after completing a morning climbing session, considering her next challenge.

Fatima Sultani along with her companions had climbed the summit of Noshakh in the Hindu Kush mountains, which is the highest peak in Afghanistan at 7,492 metres. The group claims to be the first all-Afghan team to reach the summit.

She and her team of nine young Afghan mountaineers, including three women, are hoping to climb Afghanistan's Mir Samir mountain and after that travel to Nepal to summit the world's highest peak, Mount Everest.

"My main goal is to show the world that Afghan women are strong and can do the most challenging work that men do," she told Reuters. "When I became aware that women from foreign countries come here to conquer high peaks I thought ... why can't we Afghan women conquer these peaks?"

Sultani has continued climbing throughout the coronavirus pandemic, in August making it to the summit of the 7,492 metre (24,580 feet) Noshakh Peak in the Hindu Kush mountain range in northern Afghanistan, becoming the youngest woman in the world to do so.

But as the Islamist Taliban hold peace talks with the Afghan government in Doha, many women in Afghanistan worry the militant group may exert its influence through formal political channels.

When the Taliban ruled the country between 1996 and 2001, they banned education for females and barred women from leaving the house without a male relative.

The group says it has changed but many women remain sceptical.

"When I got into sports, I knew that I would face some problems in the future, for example, one of the issues was that maybe the Taliban would hinder sport for women, but still I'm ready to face the challenge," Fatima said.

When she's not training in the mountains, Fatima lives in Kabul with her parents, younger sister and cat. Her father said he will continue to celebrate Fatima's achievements but has lingering concerns about her safety.

"I am worried about this, (the Taliban) oppose women's sports," Abdul Wahed Sultani said. "(But) I told Fatima that you are free to do whatever sport you want to, even mountaineering, and I will support her as much as I can."