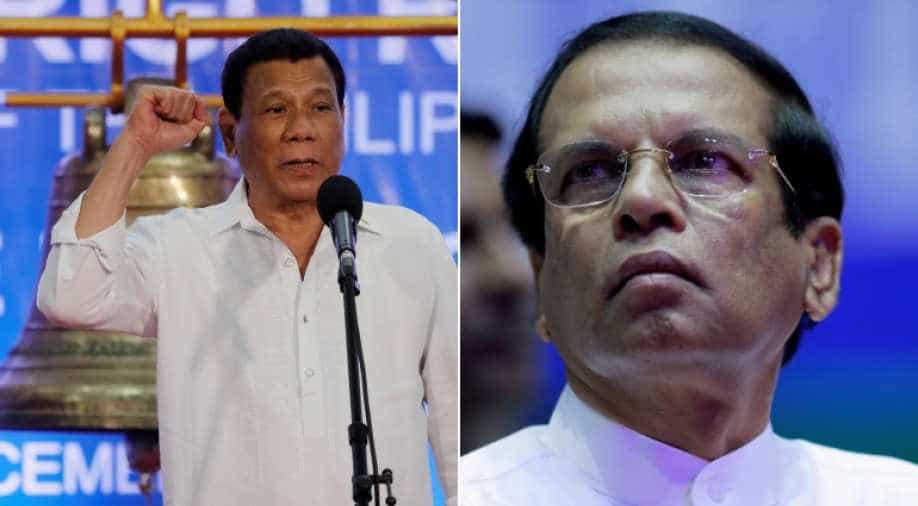 Despite international condemnation of a crackdown that has killed thousands of Filipinos, visiting Sri Lankan President Maithripala Sirisena told Duterte that he wanted to 'follow your footsteps to control this hazard'.

Human rights groups expressed alarm at Sri Lanka's leader on Friday for praising Philippine President Rodrigo Duterte and his bloody war on drugs as an "example to the whole world".

Despite international condemnation of a crackdown that has killed thousands of Filipinos, visiting Sri Lankan President Maithripala Sirisena told Duterte during a banquet this week that he wanted to "follow your footsteps to control this hazard".

Carlos Conde, a Philippines researcher for the New York-based Human Rights Watch, said Duterte's campaign was "a human rights calamity that no country in the world should even try to emulate".

"No 'drug war' that treated the drug problem purely from a crime perspective has ever succeeded," he said. "What they have wrought are untold suffering and the further destruction of the rule of law and the diminution of human rights".

The Philippine government has consistently refuted that and said the crackdown, which started in July 2016, was being administered lawfully.

On Friday, the presidential spokesman, Salvador Panelo, said any allegations of state-sponsored killings were "pure hogwash".

Police say they have since killed at least 5,000 suspected drug dealers, although activists say the number could be far higher and they dispute official accounts that the killings were all in self-defence.

More than 200 people in Bangladesh have been killed by police in a similar campaign.

International drug smugglers have increasingly turned to Sri Lanka as a transit hub in Asia, authorities there have said.

Predominantly Buddhist Sri Lanka voted in favour of a UN resolution for a moratorium on the death penalty in 2015, but Sirisena said last year he wanted convicted traffickers caught arranging drugs deals from jail to be executed.

Philippines human rights group iDefend said that if Sirisena was serious about following Duterte's lead, he should be ready to face scrutiny by the International Criminal Court (ICC) in the Hague, which has started a preliminary examination into alleged crimes against humanity by Duterte.

"We warn Asian leaders not to emulate the Philippine model but adopt a humane, evidence-based public health approach to the drugs issue through rights-based governance that strengthens, not erodes democratic institutions," iDefend spokesman Judy Pasimio said.

A spokesman for Sirisena did not immediately respond to a request for comment.