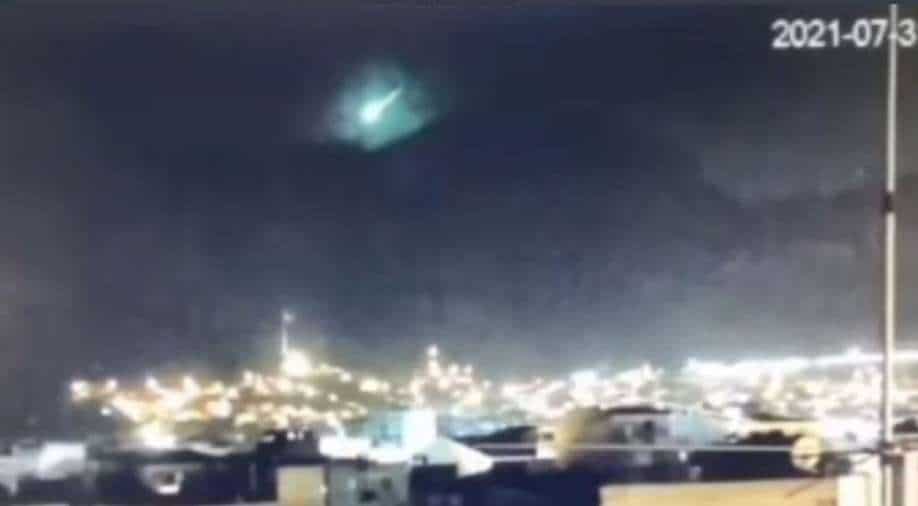 The video shows a ball of fire plummeting from the sky. Photograph:( Twitter )

Turkish social media users shared videos of what they called 'a meteor' coming towards the ground resulting in a blast above and changed the sky's colour for a few seconds.

The residents of Izmir were absolutely taken aback by an explosion in the sky that occurred in Turkey.

It also became brilliant green for a few seconds, according to accounts.

Turkish social media users posted footage of what they described as a "meteor" heading towards the ground, which caused an explosion above and temporarily changed the sky's colour.

People began to speculate in the comments when a Twitter user by the name of Halil Ibrahim Cakan posted a video of this magical scene.

A ball of fire is seen falling from the sky in the footage.

It erupts into a dazzling brilliance as it hides behind the clouds for a brief period, turning the entire sky green.

A user named Ehsan Elahi wrote, 'A green #meteor was seen over #Izmir #Turkey. This is not a meteor, just a tiny/demo missile/bomb shot from a satellite. Notice the fire as meteor enters the earth's atmosphere.'

A green #meteor was seen over #Izmir #Turkey. This is not a meteor, just a tiny/demo missile/bomb shot from satellite 🛰️. Notice the fire 🔥 as meteor enters Earth's atmosphere, you will see same effects in next videos in this thread.
1/5 👇 pic.twitter.com/m4S1vdQdAw

Dr Hasan Ali Dal, a Turkish astronomy professor, did, however, bring the thrill factor down a tad with his assumptions.

He stated that meteors tend to heat up when they approach the earth's atmosphere, according to LADBible.