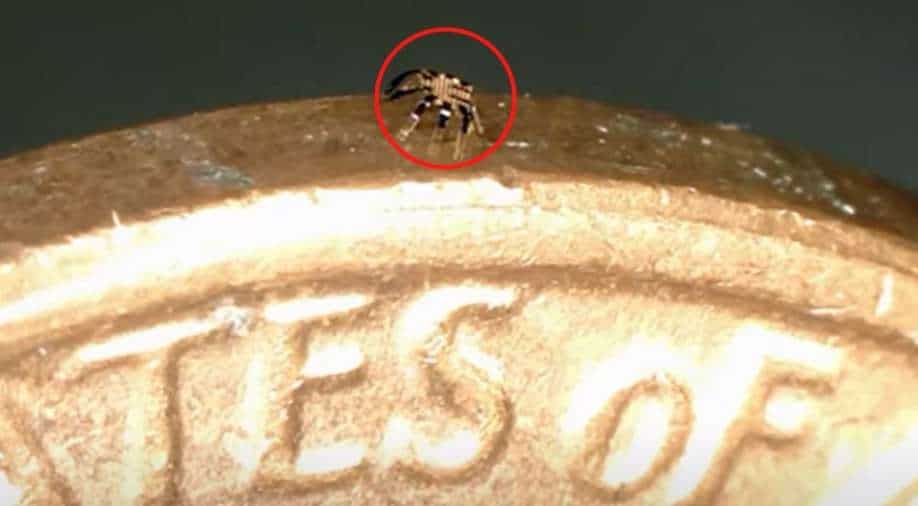 Robotic crab. (Image credit: NorthwesternU). Technology enables a variety of controlled motion modalities and can walk with an average speed of half its body length per second. Photograph:( Others )

Scientists have introduced approaches in manufacturing and actuation that address these constraints to enable "untethered, terrestrial robots with complex, three-dimensional (3D) geometries and heterogeneous material construction"

A team of engineers at Northwestern University has developed a tiny robotic crab prototype, and it looks absolutely adorable. The robot crab is tinier than a flea but it can apparently walk, bend, twist, turn and jump and perform several other functions. It is now claimed to be the smallest-ever remote-controlled walking robot - just a half-millimetre wide. The researchers have also developed millimetre-sized robots resembling inchworms, crickets and beetles. With their speed and accuracy, robots are helping humans in space exploration, medical sciences, other basic work, etc. while recognising objects, mapping new environments, performing operations, imitating human motions, acquiring new knowledge, etc.

The research published in Science Robotics stated that robots with sub-millimetre dimensions can be used for applications that range from "tools for minimally invasive surgical procedures in clinical medicine to vehicles for manipulating cells/tissues in biology research".

As per the study, limited classes of structures and materials can be used in such robots. However, it has also been understood that it can create challenges in achieving desired performance parameters and modes of operation.

Scientists have introduced approaches in manufacturing and actuation that address these constraints to enable "untethered, terrestrial robots with complex, three-dimensional (3D) geometries and heterogeneous material construction".

John A. Rogers, who is a professor of materials science and engineering at Northwestern University, said: "You might imagine micro-robots as agents to repair or assemble small structures or machines in industry or as surgical assistants to clear clogged arteries, to stop internal bleeding or to eliminate cancerous tumors -- all in minimally invasive procedures."

ALSO READ | Mars once had rivers, streams and lakes but why did the Red Planet dry out?

"Our technology enables a variety of controlled motion modalities and can walk with an average speed of half its body length per second. This is very challenging to achieve at such small scales for terrestrial robots, said mechanical engineer Yonggang Huang, from Northwestern University in Illinois.