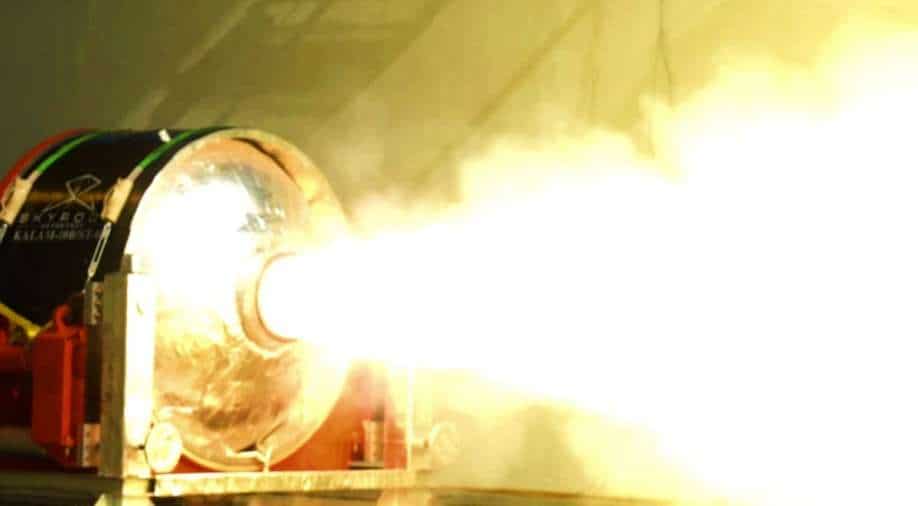 In terms of specifications, this stage of Vikram-1 produces a peak vacuum thrust of 100 kN (nearly 10Tons) and has a burn time of 108 sec

For a fledgling rocket company, every single test of a rocket engine is a crucial step toward developing an operational spacefaring rocket. Indian start-up, Skyroot Aerospace has crossed yet another milestone in developing its maiden rocket Vikram-1, by designing, developing and completing the successful test-firing of its third-stage engine, all within the Indian private sector. Vikram-1 is a four-stage rocket, where the first three stages are powered by solid fuel and the final stage by a liquid-fuel engine.

So far, Skyroot has completed the tests of its fourth stage(liquid-fuel) engine and now the third stage engine. According to the company, their third-stage engine was named ‘Kalam-100’, after rocket scientist and former Indian President Dr APJ Abdul Kalam.

In terms of specifications, this stage of Vikram-1 produces a peak vacuum thrust of 100 kN (nearly 10Tons) and has a burn time of 108 sec. The rocket stage is built with a high-strength Carbon fiber structure, solid fuel, EPDM(ethylene propylene diene monomer rubber) thermal protection system, and carbon ablative nozzle. It’s a highly reliable stage with no moving parts and a high level of automation in manufacturing.

Queried about the other tests pending for Vikram-1 and their status, Pawan K Chandana, CO-Founder and CEO of Skyroot told WION that their first and second stage engines were being manufactured and are expected to be tested in the coming months. "So far, we have tested one solid engine and one liquid engine. We are most confident about the solid-fuel engine because the second stage and first stage engine are merely larger versions of the third stage engine. Since the initial engines (one and two) are larger and take longer to develop, we chose to develop them last" he explained.

The company had hoped to perform a demo launch by 2021-end, however, that did not materialize owing to the COVID-induced disruption. Now, they have revised the maiden launch timeline for the end of 2022, whereas a launch of Customer satellites is planned for early-2023. Pawan also confirmed that the company had signed a few customers for having their satellites launched on Skyroot's Vikram-1 rocket.

For their advanced and larger rockets, Vikram 2&3, Skyroot is making improvements on their existing cryogenic engine(fuelled by super cooled hydrogen and oxygen) and are hoping to test-fire later this year. If the company are to meet their target and launch in 2023, it could be a significant development in the private aerospace sector, as they would be achieving the feat, barely five years after starting off. They hope to launch their rocket from India's spaceport Satish Dhawan Space Centre, operated by the state-run Indian Space Research Organization (ISRO).