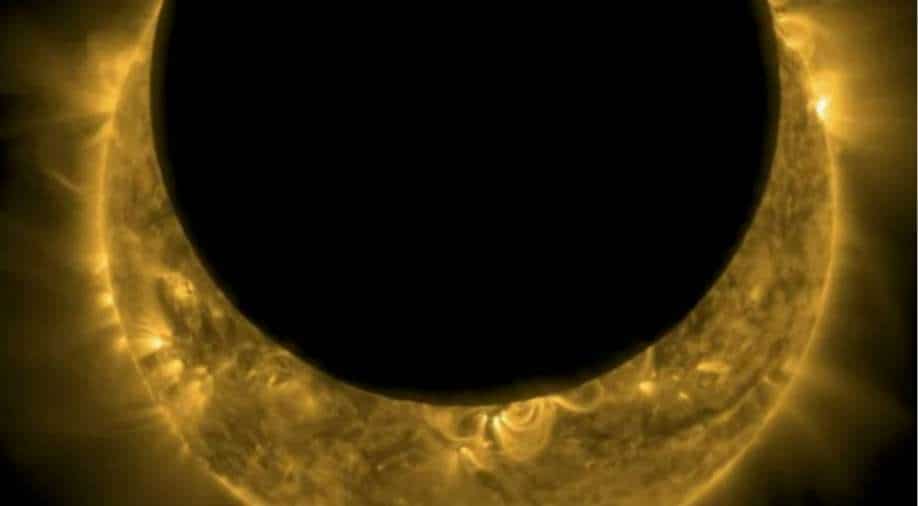 Solar eclipse is a wonder to behold when viewed from Earth in first. Not everyone of us has been lucky enough to experience this wonder of nature. If the celestial event is so impressive from our planet, imagine how it must enthral those who view it from space!

For those of us not having chosen being an astronaut as a career option, NASA comes to rescue.

In a solar eclipse, Moon is situated between the Earth and the Sun in a way that its shadow falls on Earth. Depending upon extent to which the Moon obstructs the Sun, there are three types of solar eclipses.

The one clicked by NASA is a partial solar eclipse. It has been clicked by NASA's Solar Dynamics Observatory (SDO). The SDO is NASA's observatory in the sky. It was launched in the year 2010.

The SDO recorded the 35-minute partial solar eclipse from space on Wednesday (June 29).

Over the last 12 years, observations made SDO have been extremely useful to understand the Sun

"SDO observations start in the interior of the Sun with the solar dynamo -- the churning of the Sun’s interior that creates its magnetic field and drives space weather. Further out, SDO observes the solar surface to directly measure the magnetic field and the solar atmosphere to understand how magnetic energy is linked to the interior and converted to space weather-causing events. Finally, SDO measures the extreme ultraviolet irradiance of the Sun that is a key driver to the structure and composition of the Earth’s upper atmosphere," says NASA on its website.